Welcome to the Tour Kickoff for Regan Walsh's book Whisper Cape!  I am so happy to be hosting her, as I have recently had the pleasure of reading this fabulous book!!  I asked her to give us a little background into her chaacters so we can meet them, as well at take a look at the book details.  This is what Regan had to say:

Tell us about your characters and their Quirks.


I suppose I should start with Addison, Addie to friends and family, unless your name is Cael. Addison is extremely impatient for one. She’ll ask a multitude of questions at once before anyone has a chance to squeeze in their answer to the first one. This is a quirky little habit that Cael had found a bit amusing but adorable. She is also very insecure and has no clue about the fact that she is beautiful, another quality that Cael, as well as Gerry find endearing. She tiptoes into her new role as a powerful woman when she should be embracing it all the while trying not to fall for the seemingly mercurial Cael.


Cael is very arrogant. Not because of the way he looks but because of what he can do. He is very proud of who he is, which has a tendency to come off as pompous to Addison. He has the soul and powers of an ancient warrior, but he puts on his tight, sexy jeans one leg at a time and succumbs to Addison’s allure and vulnerability just like the next dumb guy in love.


Gerry, a man of many talents, is overprotective, swears all the time—a bad habit he works on changing in book two—but deep down he’s a very caring individual who will go out of his way to protect anyone he loves. Gerry is one of my favorite characters in Whisper Cape and I am having a lot of fun with him in the sequel, Reflections.


In this first book, Maia comes off very sweet but a bit mysterious. She’s had to learn to keep secrets and support the people in her life, which has left her always putting others first, not a bad quality, but she definitely toughens up in the next book or maybe become more vulnerable, depending on which part of the book we are considering.


Darcy is a take-no-shit kind of girl, but is completely fickle about men throughout most of the story, but this is only a mask she wears to protect herself.


Jared is everybody’s best friend, though he has a tendency trip over his own two feet whenever Darcy is within close proximity.


Bart Calloon is a great storyteller and everybody’s favorite uncle. I don’t know if he has any quirky habits, at least not in the first book. He does seem to always be in the right place at the right time, though.


Siana Sheridan must spend at least two hours every day primping—that or she’s naturally gorgeous. Being Cael’s mother, it may just be the later. She never appears out of sorts and always looks flawlessly sophisticated.


Breena is an adorable little girl with the ability to pull upon your heartstrings, making you fall instantly in love with her. But be warned, she’s not your average little girl.


There are a few more characters in the story. Some have more of a presence than others. All the characters at the Sectory are unique and have their reasons for being there. And of course, there is that nasty creature, Eidolon, but I was always told that if you have nothing nice to say, then it’s best to say nothing at all.


Breena was my absolute favorite character!  I hope there is more about her in the next book!!  Let's take a look at the video and the book details: 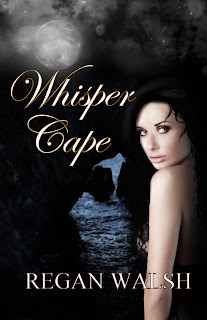 A powerful woman, an extraordinary man, and a maniac who wants to destroy them. Fate has brought them together, but will it make them stronger or destroy them all in end?

Escape to a world where the impossible becomes possible and sparks ignite.

WHISPER CAPE is a town of secrets and Addison MacKenna soon becomes tangled in a web of them. Plagued with nightmares of her father’s sudden and brutal death, Addie struggles with her anguish and refuses to believe his demise was accidental.

Fighting to shake off one of those devastating early morning nightmares, Addison finds it even harder to escape from the vision of a man lying on the side of the road—a man she may have just killed. When she frantically tries to locate him, he seemingly disappears, just the beginning of strange occurrences in her life. She also cannot ignore the weird sensations in her own body. Suddenly, the impossible seems possible, but is that a blessing or a curse?

Believing that her continual and worsening nightmares are both the key to her own new abilities and the clue to her father’s death, Addie knows she will not rest until she has the answers she craves. As she strives to cope with her new remarkable talents, someone else learns of her abilities—a disgruntled maniacal psychopath with his own agenda that involves eliminating Addie. The only one who can protect her, instruct her in the use of her powers and teach her how to destroy the murderous monster is the same man who makes Addie’s heart race and her blood heat with passion. The same man she’d left for dead.

Cael Sheridan may be arrogant and mysterious but he's also undeniably gorgeous. A member of a secret society, he is sworn to protect the woman he believes to be the daughter of his recently murdered mentor. In the process, he finds it impossible to resist her magnetic sensuality, complicating his efforts to shield and guide her as she learns to manage her newly acquired skills. At the same time, Addison has much to teach him about trust and commitment. Fate has brought them together, but will it make them stronger or destroy them both in end?

You can find Regan here:


Sound like a great read?  Of course it does!!  Enter to win your own copy below!!

Levet from Alexandra Ivy's series gets me every damn time with his one liners and POV.

first one that popped into my head was Stephanie Plum's grandmother in Janet Evanovich's series.

Any of the males from the black dagger brotherhood, but especially rhage!

Bricker from the Argeneau series by Lynsay Sands

I think I am going to go with Rachel Morgan, she is always up to something whether it be turning into a mink or creating an entire world with her memories. Thanks for starting this tour, I have been looking forward to reading Whisper Cape for a while and my fingers, as well as anything else that still crosses, are crossed :)

Jane Jameson I love that chick

Thank you, Nikki, for hosting me on your blog today.
Regan♥

I also might add a huge thank you for organizing and coordinating this tour for me. You rock!

Gosh, this is a hard question. There are so many of them. Crazy Darla from Feral Flaw by Skhye Moncrief.
luvfuzzzeeefaces at yahoo dot com

It sounds like a good book. cant wait to read this book. I have it on my wish list. butterfli262002@yahoo.com

Becky Bloomwood from the Shopaholic series wins for quirky-ness anyday!

Lafayette from the first Sookie seies is very quirky. His role on True Blood is even quirkier!

I can't think of one off hand out of your charter descriptions I would choose Darcy is a take-no-shit kind of girl, but is completely fickle about men throughout most of the story, but this is only a mask she wears to protect herself. Because I love a strong female charter.

Pam or Eric from the Sookie Stackhouse books.

This is probably going to sound so silly because the book has been out and read for so long and by so many, but as soon as I saw the word quirky I thought of "Odd Thomas". Loved the book, definitely quirky and unforgettable, IMO. New books....I have to think about that one. Lots of favorites. Thank you :)

I agree with Kassandra Levet from Alexandra Ivy's Guardians of Eternity series is beyond quirky! Styx *swoon* I got lost there for a sec, sorry! Gotta love someone who can seriously piss off every alpha male in a series, but befriend every heroine.

OMG...I have never heard of this book before, but reading what its about...I can't wait to read it!! Your amazing for doing this giveaway...Thanx and I also have to say amazing blog I love it!

It would be Nïx the Ever-Knowing from Kresley Cole's Immortals After Dark series. She's a complete nut job. :)
Carol L
Lucky4750 (at) aol (dot) com

I agree with Carol L...Nix from Kresley Cole's, Immortals After Dark series immediately came to mind.