Review: The Descendant (City of the Gods, #1) By S.J. McMillian 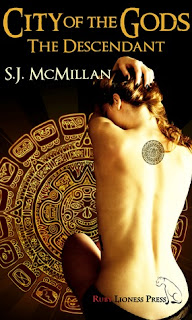 700 A.D. Teotihuacán, Mexico – The High Priest believed himself to be as powerful as the gods. He set a plague on the city as a demonstration of his power. The Gods took pity on the remaining loyal congregation. They granted each survivor immortality and an extraordinary ability. Three loyal survivors were given a mission of great importance: train the lone human descendant of their civilization to stop the evil priest from damning the rest of humanity.

2012 A.D. San Diego, California – The time has come to finally make Katalina Deckard aware of her destiny. Her life has been a constant struggle since the loss of her parents when she was young. But has it prepared her to save the world? Can her friends, who have survived so long, convince her she has what it takes to accept the mantle of Redeemer?

Katalina (Kat) was having a bad day.  She had just lost her job because of cut backs and returned home to see her fiancee packing up his stuff and leaving with another woman.  Oh yeah, this week couldn't get any better.  She was on her way to meet up with her two best friends as these thoughts were running rapid through her head.  Well those and all the cruel things Ryan had said to her as he left.  She pushed all that aside as she stepped up to the new and rather creepy doors leading to the club.  For a moment she wondered if she had the right bar, until her favorite bouncer pops off a comment to her.  As she makes her way to the bar, she glances around at all of the new changes.  Strange it seems the new owner has stirred things up.  And if that was him?  Wow, she was sure glad she came tonight!!

Tristan was on a mission.  Buying this club and setting up roots and just been step one in a long thought out plan.  And then she was pulled up on stage and asked to sing.  Kat was nervous because the crowd was tough but she played it off well and asked for suggestions.  He raised his hand and unbelievably she picked him out.  He decided to make this interesting with a little wager.  Let's just hope she sang as good as she looked!!

This book had a fascinating premise, as well as the start of a sweet romance.  I loved the mythology and the creation behind the ancient society.  Kat was by far the most fascinating complex character.  I first thought that her identity shifts were caused by her power, but it turns out I was wrong. Something darker had been created to help her cope with things she didn't want to.  It was quite a fascinating unfolding watching her character develop through the story.  The other players were unique as well, especially the last one that was introduced.  It was very interesting that what they were all looking for was right there under their noses!  I really enjoyed the intro into their society.  I eagerly await the next book!!