Happy Saturday everyone!!  The week as flown by!!! I have MaryLynn here with me and we are going to talk about her book One Bite To Passion.  But first, let's take a look at the book details: 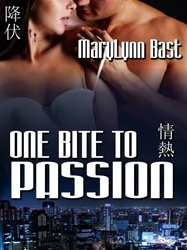 On a business trip to Japan, Paige has just found happiness with Casey, an exciting, young man with a passionate interest in Paige. After a night of wild sex, feels like a new woman. Drawn to Casey, Paige can’t refuse him even though he says he wants to possess her and she learns he is a vampire. Then Paige's unfaithful husband, Dalton, shows up. He has supposedly broken off his affair, but Paige suspects he is still seeing his mistress. Soon, Paige begins to notice disturbing things happening around her and discovers she has become the center of a battle between covens who consider her The Chosen One. But when she faces the greatest peril of her life, and Casey shows up to help, Page realizes she is willing fight the covens side-by-side with him, if it means the chance of a future with this vampire she has come to love.


Leaning against the door, she took a deep breath to calm her pounding heart. Why was she having such a reaction to a man she had barely met, not even twenty four hours ago. "Yet you slept with him." She grumbled to herself and released a sigh. Slipping quickly into her undergarments, she slipped on a pair of jeans and a t-shirt and headed back out to the living room.


Casey sat on the loveseat by the window, but Rosa was gone. He responded to her questioning look. "She went back to her room, said she had to get something for you."


Paige remembered a package was supposed to be delivered. But that quickly left her mind when Casey patted the seat next to him. She shook her head no, deciding it wasn't a good idea to snuggle with him. She leaned against the bar that separated the kitchen from the living area.


"I won't bite." He smiled and wiggled his eyebrows at her. "Too hard."


Paige laughed nervously. "Uh, Casey, about last night." She couldn't bring herself to look at him.


"I told you Paige, I wanted you and I still do." He lounged back on the seat, one arm thrown casually across the back.


"I, uh. I'm married. I shouldn't have done that." She inspected her manicured nail.


"I also remember telling you that your husband was a lucky man. So, yeah, I'm aware you are married and I don't care." He spoke softly. He patted the seat once again.


She heard the honesty in his words, and once again shook her head, but this time she stared at him. She had to end this. She was in Japan to work, not have an ongoing affair with a younger man. She opened her mouth to speak, before she could, the look on his face stopped her.


"Paige." Casey stood and walked over to where she was. His hand rose up to her face, his fingers slid gently across her cheek, his eyes looked haunted. "I can't stop thinking about you. I know you are married and I know I should feel bad about that, but I don't. He should respect you and he doesn't."


How in the world would he know that! Paige stared at him, wondering if she had gotten herself into something she wouldn't easily get out of.


"I want to be with you." He continued staring at her, but he made no move to touch her any further than the caress on her cheek.


"But that's impossible Casey. I can't do this. I love my husband."


Closing her eyes she didn't know what she was going to do. Dalton had never made her feel the way Casey had. But that had been about sex. She and Dalton had twenty years together and couldn't throw that all away for one night of great sex.


"I…" She didn't know what to say, His lips descended and grazed hers and she melted against him. Her brain screamed at her to stop, but her body said the exact opposite. The kiss deepened and he pulled her to him. Their tongues battled for a moment before she pulled away and buried her head in his chest.


"I know you are going to think I'm crazy, but Paige, I think I'm already in love with you." He pulled her close, his voice barely above a whisper.

This was a likable quickie!! Paige goes away on a business trip and acts totally out of character.  Which at her age is very rare.  She has been married to the same man since high school and while she doesn't love him, she remains loyal.  Dalton treats her badly and has cheated on her.  But all that changes when Casey walks into the room.  His ice-blue eyes seem to call to her and she is lost.  But will she be able to go back to Dalton's empty caresses after she's tasted fire?  Why is Casey so different?  Its not like he can read her mind...or can he?  This was a different type of Vampire novel that has covens and a hierarchy.  I look forward to reading more about this intriguing world!  Great Read!

Would you like a chance to win your own copy?  Sure you would!!!  Just fill out the rafflecopter!!!
a Rafflecopter giveaway

I have always had a soft spot for the pointy teethed bastards ;) First one I ever fell for was Lestat from Anne Rice.

Ultimately I enjoy an alpha male no matter what variety ;)

I started off as a die hard fan of Vamps. But I found myself pulled towards shifters of late. Especially Wolves, Panthers and cougars! ROAR ;)

I love weres! But vamps are up there too.
Yvette
yratpatrol@aol.com

I like both vamps and weres. Each has their own quirks.

I like both vamps and werewolves but right now my favorites are the werewolves in Molly Harper's Naked Werewolf series.
This book sounds fantastic. Can't wait to read it.

I love weres! :) Right now my favorite ones are J.J. Massas Montgomery Family series. So good!

I love them both! Maybe vampires a little bit more...

Thanks for another amazing giveaway!
elizabeth @ bookattict . com

I love weres who are truely alpha and I adore vampires who are more good than evil.
mom1248(at)att.net

I really love vampires one of my favorites is Bones from Jeaniene Frost! Thank you for the great giveaway!
tishajean@ charter.net

I love them both, as long as they are super alpha, they have me melting.

I love vampires!!! Especially BDB's JM!!! I also like weres but not that much...

the vamps and weres in Kate Daniels series are both awesome!

i love them both...but prefer werewolf like vane in sherrylin kenyon dark hunter series....he is a wolf shifter :)

i like them both.. vampires from BDB in JR.Ward books.. ^^
thanks..

Love those alpha weres and those tortured vamps especially those in the Immortals After Dark series .Ive never read on e i didnt fall for .

I love both, many my book was story about vampir and werewolf^^

werewolves...i love me some Alcide on True Blood and Jacob on Twilight. But I do love Eric Northman too. Decisions...decisions...

I like both, but weres win out every time.

Once upon a time it was vamps, but I do have a preference for weres these days.
Thanks for the giveaway :)

I love both but weres have a slight edge in my book. :)