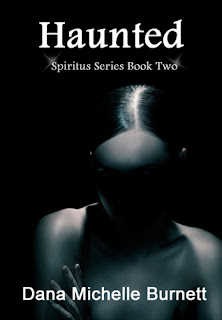 Alastor came at me then, forcing me back against the wall. He was so solid that I could feel his weight against me. I could feel his frozen breath on my face....He ran his hand up my arm, over my shoulder, and rested at the base of my throat. His blue eyes glittered dangerously.


Becca has accepted the horrors of her past life, and emerged with her ghostly love Alastor at her side. But her happiness is short lived when she realizes that balancing her past and present won't be easy...

Becca has already decided that it's Alastor that she loves, but now, as their uncommon relationship limits Becca's future, Alastor must decide if he's willing to make the ultimate sacrifice for Becca's happiness....And will Becca's sanity survive?

I loved the premise for the first book in the series.  It was extremely heart-breaking for the two of them constantly struggling to be together even though it isn't quite  possiable.  For Alastor is a ghost and Becca is alive.  Even though she remembers bits and pieces of their life together, she is constanly amazed at the dependency that has rapidly grown for his company.  The Romance begins and love they feel for each other falls into place and you are left with quite an extradonary read!   This book, however,  takes a dip into the dark-side of what really could happen if Becca and Alastor were discovered.

It begins with Becca being locked up.  A lot has happened since Book 1.  Becca has married and been widowed all within the span of a few years.    Sadly, Becca's father is the one that thinks Becca has lost touch with reality due to her grief and locked her up.  It is through Becca's re-telling of her life to one Dr. Langdon that we see how the story has progressed, and the shocking changes in our characters.

Even though we know that Becca isn't crazy, this story outlines a very realisitc and heart-wrenching reality that she finds herself in.  Where as in the first book was concentrated on love, this one is centered on pain.  The author does an exquisite job of showing of capturing the array of emotions on paper.  The book practically cries to you.  Even though it is filled with tears, it in no way takes away from the actual story, which is very good.  It is just such a different twist to the first book.  Dana sure has found her niche at ripping emotional responses out of the reader!!  I can't wait for the conclusion!!

Thanks for the contests.