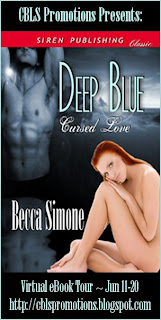 Welcome to this stop on Becca's tour of Deep Blue.  When I read the blurb I was immediately sucked in and knew I had to read it!!  My all time favorite fairytale is Beauty and the Beast and this was a spin-off!!  So let's take a look at the book details and sneak a peek inside: Blurb:Under the light of a full moon and lurking in the restless waves of the deep blue sea, someone or something watches a ship cutting through the dark waters.
Insurance fraud investigator Kate Hargrove is looking into the disappearances of women from a cruise line. She soon “disappears” herself when pulled undersea by a giant sea creature. Now, this beauty is trapped beneath the sea with a desperate beast.100 years ago, Thaddeus Ryker was cursed and banished to the ocean depths. He has only three more days to find someone to love him in his monstrous half man/half sea creature state or he’ll spend eternity as a monster of the sea.When her terror subsides, Kate realizes she’s both attracted to and repulsed by Thaddeus. As she gets to know him, she discovers a sexy, haunted man. Can she learn to love him – a monster – in just three days?


“Then shut up and kiss me, Thaddeus,” she muttered.


He lifted his head. “You modern women are so demanding,” he said, before clamping his mouth onto hers. This time, he was the one in control, his tongue demanding and thorough. “Heaven on earth, you taste amazing,” he said, coming up for air.


“And this isn’t my tastiest body part,” she whispered, feeling incredibly wanton and frisky, so unlike how she usually was with men. This whole situation was so surreal.


His chuckle vibrated behind her ear. “What is your tastiest part?”


She giggled and dropped her head back, allowing him better access to the sensitive skin of her neck. “You’ll know when you find it.” God, this was fun.


His tongue dipped into the shell of her ear. He blew on her softly. “Mmm, you taste pretty good right here,” he murmured. He bent her backward over his strong forearms, and kissed a path down to her breasts. He met her eyes, grinned, and then his mouth closed over a nipple, drawing it into his hot mouth. Every suck pulled deep in her pussy. If she didn’t know better, she’d think he was kissing her clit at the same time as the pleasure radiated between her legs.


“You’re doing that mind thing again, aren’t you?” she asked, her voice breathless.


“I’m sorry, my love. I have been too long without a woman and I’m afraid I can’t keep my lusty thoughts from the sweet spot between your legs.”


That sweet spot ached and she squirmed against the rock. “No apologies necessary,” she gasped.


Becca Simone was just eleven years old when she read her first romance novel. It was about the same time that she realized making up stories was way more exciting than reality. Thus, an author was born. Becca lives in the Pacific Northwest with her husband, two kids and a menagerie of pets.

What can I say?  I am a sucker for a great love story and this erotic beauty and the beast spin-off fits the bill!!!  Kate is looking into the death and disappearances of several girls from cruise ships.  All were single and not fitting the bill for suicidal, so something was definitely amiss.  Kate plans to keep a look out for the next victim by scoping out the crime-scene during the hours of the disappearances.  She gets awoken, not by her alarm clock, but by the most intense orgasms she's ever had.  To make matters worse, she now has to go to work.  But as she begins her rounds this night, something strange pulls her towards the water.  She hears a hypnotic voice telling her to come...but I don't think he meant that way!!!

Thaddeus has waited a 100 years to find the one who will break his curse.  He has three days to find someone to fall in love with him or he will remain a beast for all eternity.  He spies Kate on the cruise ship and knows he must have her.  Could she be the one to end his miserable existence?  To help him regain all that he has lost and finally become human?

This was a naughty love story and I must say I really enjoyed it.  Your heart breaks for Thaddeus as you imagine his years of solitude and disappointment.  It would take someone strong, compassionate, and understanding to help this poor creature.  But can Kate rally to the cause?  You'll have to wait and see!  Excellent read!!! 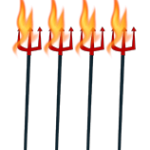 You can follow the rest of the tour by clicking Here!!

Wow! Thank you SO much for the awesome review. I really appreciate it, and thank you for hosting me on part of my blog tour.

Thanks for the great review. This book sounds fantastic. Can't wait to read it.