Guest Post with Bonnie Bliss and her take on Why Erotica? 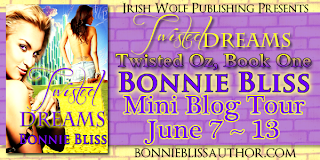 Hello and Welcome to this stop on Bonnie's mini tour!!  I am thrilled to welcome her back!  She did a little write up just for us talking about her choice of writing material..lol.   Let's take a look at what she had to say:


Now, I get asked this question a lot. It varies from personal friends, to other authors that are writing in other genres. I have been told that it limits my audience. I personally think that writing in Young Adult would limit my audience, but that is the reason I picked erotica. My main reason is, is that sex is natural. It is something that happens; whether it be vulgar, sweet, passionate, or with a flogger in hand. Sex can, does, and will happen. I had sex before I was married. But that was mainly to find myself. I struggled with the reason I never had an orgasm, but that is a whole other story I have told on many other BDSM groups for other women trying to find their sexual niche.


But, for the most part, I just like having sex. I like my girls to get laid when they want to. I like my men to take their woman when they get a hard on. I am not a beat around the bush kind of girl. I even like telling stories of already married couples exploring their sexuality (The Dominance Series), and it falls under erotica, because of the sexual content, and the fact that it doesn’t follow the ‘formula’. I kind of like to follow my own formula. It gives me a bit more wiggle room. And that is not to say that one of my erotica stories might not just end all flowers and roses, (Though my roses tend to have thorns ;-))  but you will see the main characters get all that they desire. And sometimes my girls just desire a f*ck buddy.


Now, for a little tidbit.


The first Twisted Oz book is titled Twisted Dreams. Of course you have the Tornado, her landing in Oz, and meeting up with Glinda, The Good Witch. But you will soon discover that all that is ‘Good’, might just have a plan of their own.

Excerpt:
D.G. Harper let out a huge gust of air. Her palms rested against the lip of the bar top. She leaned against it, the hard wood digging into her chest just below her breasts. D.G. had been on her feet for the last six hours. Not just to work her job at ToTo’s, but to work on the farm with her Aunt and Uncle. A farm girl’s life was never done. Pursing her lips, she glanced over her shoulder to take in the steady lunch crowd. It was all business men that had poured in to get a cheap view of hot women, on their lunch break. ToTo’s was the equivalent to a sports bar that served great burgers and the best chicken wings in the United States. You could even bring your family in, and men could freely ogle young girl’s right under their wife’s noses. It was degrading, but fantastic money. The uniform wasn’t suited to waitressing though. The tight emerald green hot pants had officially ridden so far up her ass and cunt that she wanted out of them. The tight white T that stretched the word ToTo’s across her ample breasts was like wearing no top with the way men looked at her. D.G. laughed every time she had to get into panty hose, with white socks, and ruby red sequined sneakers which finished off the porno uniform she was forced to wear to work for a living. It didn’t help she was built like an old fashioned bombshell, with sparkling blue eyes. Her long, brunette hair was pulled back in a high ponytail.


“When you off?” Charlene’s musical tones broke through her mental whining. Looking up at the voluptuous blonde, she couldn’t help but smile.


If D.G. swung that way, she would be all over Charlene. It wasn’t for Charlene’s lack of trying, the woman hit on her regularly. D.G. just liked cock too much, and wasn’t sure pussy was her thing.


“As soon as I deliver these drinks to table sixteen, and Darla comes in to relieve me.”


“You any closer to your goal?”


D.G.’s shoulders lifted and her gaze dropped to look at the drinks on her serving tray.


“I think in about six months I’ll have enough to officially get out of here and go to New York. I am just sick of this Podunk town. I want my time. I love the farm and I love Aunt Em and Uncle Henry, but I’m over it. I’m not some little farm girl in a blue and white gingham dress, with a cute basket and a dog. I’m a grown woman. I’m twenty three and I want out of this town with no future.”


“I’m totally with you, girl. Just follow the yellow brick road.” She winked and gestured her head in the direction of the door.


You can Purchase Twisted Oz at these eRetailers:
All Romance: http://www.allromanceebooks.com/product-twisteddreams-794361-143.html

I like this book, I remember hearing about it over at The Romantic Reviews and thinking it was an interesting take on the Wizard of Oz. Thanks for reminding me about it, I'd forgotten the authors name and was having trouble finding it.