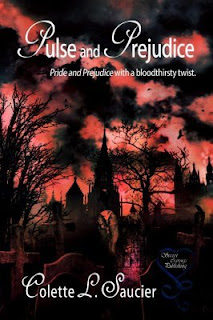 In this thrilling and sensual adaptation of the classic love story, Elizabeth Bennet and the citizens of Hertfordshire know Fitzwilliam Darcy to be a proud, unpleasant sort of man, but they never suspect the dark secret of his true nature. He is not a man at all – but a vampire.

When the haughty and wealthy Fitzwilliam Darcy arrives in the rural county of Hertfordshire, he finds he cannot control his attraction to Elizabeth Bennet – a horrifying thought because, as she is too far below his social standing to ignite his heart, he fears she must appeal to the dark impulses he struggles to suppress.

Set against the vivid backdrop of historical Regency England, this adaptation of Pride and Prejudice follows the cursed Mr. Darcy as he strives to overcome both his love and his bloodlust for Miss Elizabeth Bennet. This compelling variation remains faithful to the original plot and style of the Jane Austen classic but tells Darcy’s story as he descends into the seedier side of London and introduces Elizabeth to a world of passion and the paranormal she never knew existed

I have been asked repeatedly over the years the same question:  Who is your ideal for the perfect male lead?  That answer has never changed, for my heart has remained true to Mr. Darcy.  I still cry as I watch the metamorphisis of his character after meeting Elizabeth.  He truly moves mountains for her love.  How can any other male compare?  So when I heard of this book, where my beloved Mr. Darcy is a vampire, I knew I had to read it!  I was in no way disappointed.  It turned out to be a wonderful story!

It follows along the same lines as the original Pride and Prejudice.  I was completely impressed with how well the story still flowed, even though much detail was still needed!!  Imagine Mr. Darcy as a vampire! It was amazingly intriguing!  It added another layer or two to an already complex character.  Toss in the fact that Mr. Wickham was ALSO a vampire and you put a new spin on their feud.

Elizabeth was such a passionate and headstrung female.  I often wondered, if given the right circumstances, would she choose to tempt Darcy?  I must confess that if I were in her shoes I would be hard-pressed not to!  But we get a little glimpse inside both of their passionate natures, something that was lacking in the original. Putting a paranormal spin on things allows for certain rules of decorum to be broken, which added a delightful reprieve from the story line.

The original version has always been in my top five favorite books.  I completely enjoyed this version and fell in love with Mr. Darcy all over again as a vampire.  I think all paranormal and romantic fans will enjoy this tale.  It's not everday where your favorite hero becomes immortal..literally!!  Excellent read!!