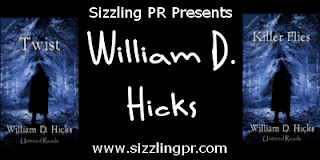 Welcome to this stop on William's tour!!  Today we will be talking about villians!!  This is what William had to say about them"


Some stories have obvious villains. Others don’t. Think of those old movies where the heroine is placed on the tracks by a man dressed in black. Nowadays, people don’t like stories that obvious. Because if a reader knows who the evil character is in paragraph two why bother reading to the obvious ending in paragraph 42.


As an example, while it seems easy to determine who the villain is in the story of Frankenstein, it truly isn’t. Is the real villain Dr. Frankenstein or the village people who want to destroy what they don’t understand? Is it the monster? To some degree it’s almost everyone in the story. Yet the only real victim is the monster. He had no choice about whom or what he was. Such is the case in most horror stories where man alters something or someone.


This is true in my story Killer Flies. While the flies are the ultimate villains who do the killing, they are also the victims. Without some kind of human intervention they would have remained normal house flies, unable to do any harm other than annoying their human counterparts. But all good writers know that villains are good and bad. Just like in real life. Some part of each character causes a situation, making it hard decipher who to blame.


Readers love these shades of grey because life is like that. Not clear cut. Curious. Scary. Exciting.


Especially when you’re a kid. At seven I was a bit of precocious child and didn’t like people directing my actions. I walked home from school every day. Alone. I lived in a safe middle class neighborhood on the north side of Chicago. I’d been walking myself home since first grade, no problem.


This day turned out to be different. The old cinderblock grammar school felt old and gray. More like a haunted church than a place of higher education. Maybe because it was oddly dull and overcast on this early November day. It should have been bright and sunny.


This day I had helped a teacher clean some chalk board erasers so had left at 3:30 and had missed the mad rush home. A few kids lingered and were still mulling around the school. But not many were heading my way. That was fine by me. It felt like rain. The wind had a bite and smell I had begun to associate as a storm front. The school loomed over my shoulder and I a shiver rose up my spine. I was passing the girl’s chain linked playground area, so named because there were two sides to the grammar school. One side where the boys played baseball and one side where the girls giggled, spread rumors, talked about makeup and sometimes got little boys to play tag. I hated this side since some girls had convinced me to play and I had been teased by my friends afterwards.


No kids were in this fenced in area since school had let out 15 minutes before. It was autumn dreary. A man yelled out at me from a black van and told me get. The vehicle had no side windows. I jumped at the sound of his grating voice. And veered toward the chain link fence. I hadn’t seen the van pull to the curb beside me. The man hailed me again.


I couldn’t see him. I didn’t recognize the voice. I didn’t know the van.


I bolted and ran like hell for home. No boogey man was going to child-nap me.


This all happened. In my mind it was all true. The man was the villain. But was he really? Did he have malice in his heart—or was he a concerned parent with a kid my age who wanted to make sure I got home okay?


Who then was the villain—me for possibly falsely accusing this unknown individual. Even if just in my own head. Or him for not identifying himself and scaring me to death? Or was he a real life villain—there to kidnap me?


Who knows? That day everything seemed sinister and suspect, just as it does in many stories. But when I wrote the story I intentionally left much to my reader’s imagination. Because to be like real life it couldn’t be so black and white. It had to have some suspense. Read me eBook Killer Flies and you’ll see what I mean.
Let's take a closer look at William's books: 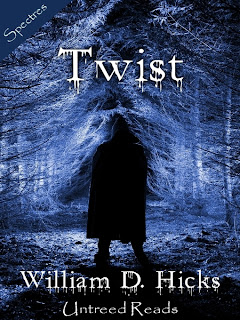 As a boy growing up in 1953, Kevin Hull enjoyed playing games with his group of boyhood friends, like the game of "ledge." After one such game with his friend Billy Hawkins, the two find themselves involved in a terrible accident that will forever change their lives.

A work of short psychological horror from our Spectres line. 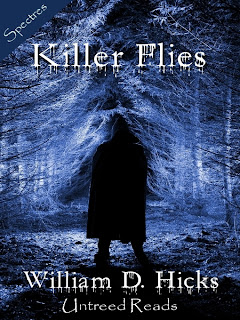 The Army plans to use a new breed of flies to protect combat soldiers. But Dr. John Pankow, their creator, is worried that his killer flies are uncontrollable. Will Mother Nature's most genetically-altered weapon be the ultimate armor, or the potential ravager of the entire world?

A work of short horror from our Spectres line.


“So, you created a vaccine?” General Donner asked.


“Yes, but its effectiveness is only twenty days, or less, depending on metabolic rate. Plus upon further testing this treatment doesn’t work on everyone.”


“Any more questions before I continue?” Pankow waited, no one’s hand went up. “Even though many of my colleagues see little harm in allowing the mix of killer flies with general house flies, I disagree. Currently interbreeding appears safe, because few can survive alone, and without ‘mothers,’ as we call the females, they can’t multiply. But that doesn’t prevent these flies from mutating and forming a new lethal strain. And this would be even more likely if one of the mothers escapes.”


“That won’t happen,” General Bider quickly interjected. “We have one room of mothers which is segregated from all the others.”


“But what happens if one does escape?” Carrie Jacobs, Dr. Pankow’s new research assistant, asked.


Before the doctor could respond, General Willard did. “We’ve taken precautions so that won’t happen; a full bee suit, a security access door, and researchers must go through a sealed room to get at those dangerous mothers. Pardon the pun.”


A slight giggle circled the room. It irritated Pankow. This was serious business, not a place for stupid puns.


“If one female escapes or gets into the wrong hands it will have dire effects. That is why all doors require a key card, and an electrical Flash-Kill system will be installed next year. Funding cuts, you understand, made it impossible to purchase this system until then,” General Bider said, giving no indication he was sorry about the funding issues.


“If one ever escapes it might mean the end of the world,” Pankow finished, allowing his last words to reverberate in their minds.


“I think Dr. Pankow is reading too many science fiction magazines.” General Bider laughed. “These flies will save our soldiers’ lives. We have them under control gentlemen. Are there any questions I can answer?”