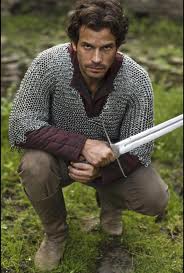 I have always LOVED knights.  Let's face it ladies, we love our historic version of bad boys and something about guys that tote swords and ride horses just do it for you.  And this story by Tarah Scott fulfils that yummy itch.  Take it away Tarah:
Thanks, Nikki, for having me back on Close Encounters with the Night Kind. Today, I’m going to share a bit about my Scottish Medieval A Knight of Passion.

Lady Riana Ellis will risk the fires of Hell for those she loves. Can she let a man do the same for her?
In Medieval , Lady Riana Ellis plays the whore for the Duchess of Arundel—and keeps her sister safe from the duke’s lascivious desires. Now the duchess demands that Riana murder the man already sent to her bed.

Sir Bryant Cullen determines to have the duchess’ whore. Her land is a prize, but it’s her secrets he wants. Once he knows what she knows, he will control one of the most powerful houses in . And she will be his.
I have an affinity for Scottish romances. I’m not unique there, thankfully! during medieval times is a raw, edgy period in our history. A cut throat society was very much at odds with the code of honor that knights followed.

Thou shalt be everywhere and always the champion of the Right and the Good against Injustice and Evil.

Like every walk of life, not all knights lived up to this code. But it was a way of life for most, and the code was a serious oath. Not unlike our military men and women of today. Thank you to our U.S. Military!

Medieval people were a no nonsense people. If they didn’t take life seriously, their already short lives were even shorter. The determination to live life to the fullest is something I love writing about.

My hero in A Knight of Passion is a man who has risen to knighthood by the sweat of his brow. He is driven to succeed, is quick to decide what he wants and act on that decision. He isn’t afraid to fight for what he wants, and is just as willing to admit when he’s erred. But he will have his way—as is the case with all men!

Lady Riana Ellis is determined that her sister not be abused by their “protectors” as Riana has been. She is willing to sacrifice everything to save her. But the sacrifice she must ultimately make is the one she never conceived of: allow another person to lay their life on the line for her. Dying for someone we love isn’t nearly as hard as is allowing someone else to die for us. 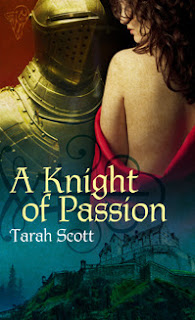 But Riana waits for no man to save her, trusts no man-no matter how much he sets her body on fire. When Sir Bryant puts his life on the line for her, how will she stop his sacrifice?
Adult Excerpt—
His arm clamped down on her legs. A dull slap sounded in unison with an unexpected sting to her arse. She cried out, confused, then realised he had swatted her.
“Beast,” she shouted. They turned a sharp corner and she jerked back, narrowly missing the stone wall. “You will knock me senseless.”
“Mayhap knock some sense into you,” he muttered.
Sir Dunbar laughed. Riana jerked her head up and met his gaze. The old knight lifted a brow.
“Poison would have served you right,” she muttered.
He laughed harder.
The reached narrow stairs that descended in a tight circle. Sir Bryant shifted. She felt herself falling and grabbed for his gambeson He slid her into his arms and pressed her close to his chest. She clung to his neck and buried her face against the warm flesh. His scent, masculine and musky, was just as it had been when their bodies had been entwined, his cock moving in and out of her arse as she bucked against the phallus. He had gripped her waist with an intensity that had startled her. Her heart beat a thunderous rhythm in her ears. Why had he wanted her so badly…why had she wanted him? What did he want with her now?
At last, they reached the bottom, and Riana lifted her head. “Put me down.”
He kept his eyes straight ahead as he continued to follow the warden through a second corridor. They turned another bend and the warden stopped at the door on his right. He unlocked the door, then lifted the sconce from the wall to the right of the door and stepped aside. Sir Bryant entered the darkened cell with Riana in his arms, followed by Sir Dunbar. Light flooded the room when the warden entered, sconce in hand.
Riana squirmed in Sir Bryant’s hold.
“Be still,” he ordered with a squeeze.
“Put me down,” she countered.
“By God, Riana, another word, and I will bind and gag you.”

I LOVE the knights in Monty Python's Holy Grail, esp the Black Knight ;)

Oooh, I love Sir Ulric in A Knight's Tale

I don't know who my favorite Knight would be so I am going to go with Lancelot.

I'd have to go with with Lancelot.

I don't really have a fave knight, but I'd go with Lancelot and the Knights of the Round Table.

Heath Ledger in A Knight's Tale!

Sir Guy of Gisborne (at least I think that is how you spell it). He takes a backseat to the other better known knights, but I always thought he had a great story to tell.

I don't know my favorite knight. All i know was in novels.

I'm hoping yall count him as a knight: Kevin Coastner in Robin Hood; Men in Tights. I love that movie.

My favorite knight has to come from the book Knight in Shining Armor by Jude Deveraux, Nicholas Stafford - yep he wins!

I don't really have a fav knight....but on the otherhand, I do have to say my husband is my night in shining armor at this point