Review: The Book of Paul By: Richard Long 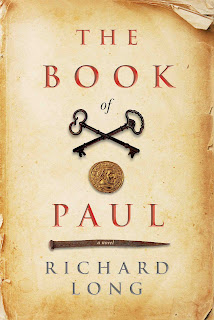 
In the rubble-strewn wasteland of Alphabet City, a squalid tenement conceals a treasure "beyond all imagining"--an immaculately preserved, fifth century codex. The sole repository of ancient Hermetic lore, it contains the authentic alchemical rituals for transforming thought into substance, transmuting matter at will...and attaining eternal life.


When a lusty, East Village tattoo artist has a torrid encounter with a battle-hardened loner, they are overwhelmed by the intensity of their feelings. Rose and Martin soon discover they are unwitting pawns on opposing sides of a battle that has shaped the course of human history. At the center of the conflict is Paul, the villainous overlord of an underground feudal society, who guards the book's occult secrets in preparation for the fulfillment of an apocalyptic prophecy.


The action is relentless as Martin and Rose fight to escape Paul's clutches and Martin's destiny as the chosen recipient of Paul's sinister legacy. Science and magic, mythology and technology converge in a monumental battle where the stakes couldn't be higher: control of the ultimate power in the universe--the Maelstrom.


The Book of Paul is the first of seven volumes in a sweeping mythological narrative tracing the mystical connections between Hermes Trismegistus in ancient Egypt, Sophia, the female counterpart of Christ, and the Celtic druids of Clan Kelly.

This was a completely outstanding read!!  It dips into a vast array of mythology and ties so many of them together into one action-packed story.  The Book of Paul is truly an enchanting tale that will leave you spellbound with a mixture of surprise, shock, disgust, laughter, and hope.  It is an ingenious mixture of all things intriguing!  I can't wait to read more of this series!  The only thing I can say is...wow!!  Hats of to you Richard Long for creating a truly worthy and delightful read!!

I love books like these! Have you read Thirteen Hallows by Michael Scott and Violette Freedman? It's similar to this so try it if you haven't yet.

Hi Nikki, thanks for the great review! That's a lot of spiders. I'm sure Paul/William will enjoy them -- as pets! If you could cross-post to Amazon etc. That would be great! And thanks again for supporting the giveaway!