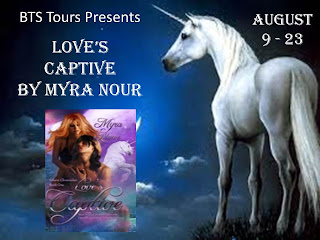 Good Morning my Tasty Tidbit Lovers!!  Today we are kicking off another great tour!!  I ave Myra Nour with me today and we are talking about her book and hot guys.  Sounds great right?  LOL!!  So I asked Myra about her her top ten hotties, and this is what she gave me: 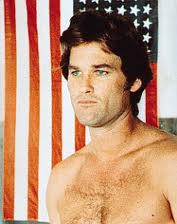 When it comes to hottest guys I'm very visual, so I gotta go mainly with movies: 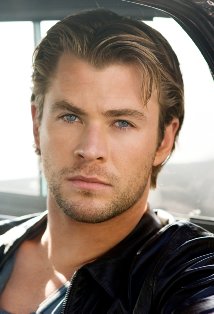 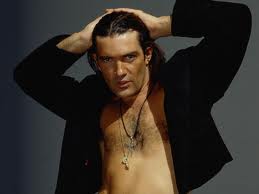 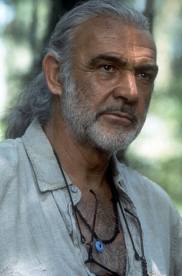 9. Sean Connery, older one, especially with a beard and long hair in a ponytail. 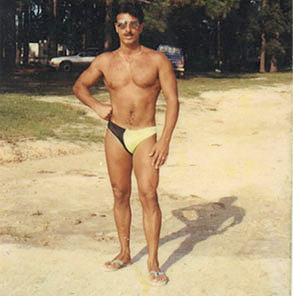 10. Simon Nour, my husband. He went last because I didn't want to seem prejudice.

Ok...so let's take a break from the hot guys and talk about some books!!  LOL!  Love's Captive virtual tour kicks off today, so lets take a look at the book details: 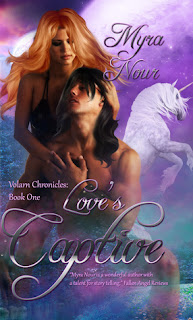 When Serena awakes, after a close and unpleasant encounter with some sort of stun gun, she very quickly learns that resistance is futile and escape only a yearned for dream. She, and the other Earth women Serena meets aboard ship with her, have been captured by the Moyds, interstellar merchants ..their mission, to procure fertile wives for the men of Volarn, where their race is endangered due to the wide-spread sterility of their own women. Learning this is at least some relief to the captured women, but Serena is disgusted to realize that they are nothing in these men's eyes but baby makers. Regardless, she knows she has no choice but to face the fate that awaits her with as much dignity as she can muster. Once they arrive on Volarn, Serena learns that her assessment has not been entirely accurate. Using their power crystals in the Tarthra Ritual, the warriors approach the women with their crystals to find the mate most suited to them..a woman to love who can love them. Serena is chosen to become King Rhamus' queen, but, just as she feels herself weakening to Rhamus' romantic, passionate nature, Rhamus' enemy, Xarath, abducts her. Rating: Contains explicit sex, graphic language and some violence.


"Ah," he reached and grasped her nearer hand, "but even the Queen must be subject to the King's ... desires."
Suddenly their game took on a more serious quality and Serena found that she wanted the play to continue, no matter what direction it took. She stepped close to Rhamus and sponged water over his wide chest, and then traced her name on his front. She found that breathing seemed harder standing within the circle of his arms, that she'd dropped the sponge, but her hands continued to rub his firm chest in large circular strokes.


"Is this how Earth women mark their mates?" He asked archly.


He ran one callused hand up and down her left arm, as if washing her in return. Shivers of pure pleasure ran up Serena's arm at his caressing. She extended her strokes to include his large biceps and felt them bunch in reaction to her touch. She looked in Rhamus' eyes and saw the unveiled heat of his gaze and knew that a similar longing was reflected in her own eyes. He ran his hands up both her arms, pressing and kneading gently. Then his hands slid down her back and began a circular massage to the small of her back. Serena felt herself relaxing completely.
It seemed only natural that both their arms went up in synchrony and encircled one another’s necks, both rubbing each other's napes in a continued assault on their sense of touch. Their kiss was slow and befitted the languorous feeling that seemed to surround their coming together. Rhamus slowly slipped Serena's dress down, exposing her lush breasts to the strong rhythmic pressure of his hands.
Her senses were invaded with the soft swish of the warm water as they moved, the feel of his steely body beneath her exploring fingers, the wonderful taste of the soft flesh of his mouth, and the texture of his tongue as it played havoc with her own. And then there were the hot stabs of pleasure he caused to shoot throughout her body, wherever his experienced hands rubbed and stroked. A few deft caresses of his hands around her hips and her dress slid down.


Serena kicked the last barrier between their bodies off in one quick movement. Rhamus' hands regained their purchase on her slick body and began a further stroking of her hips and upper thighs. She sucked in her breath at the heated contact of their lower bodies, her soft mound against his hard male member making her feel utterly feminine.


Her body was flushed with heat, especially the joining of her thighs. The delicate flesh felt swollen and achy. Serena had come to recognize her response as sexual desire and welcomed it. She wanted Rhamus. Wanted him to bury his hard cock in her.


When he raised one of her legs, it took Serena a moment to realize what he intended. Before she could protest that this feat seemed impossible, he’d raised her up and wrapped both her legs about his waist and entered her slightly. She stared with wonder, realizing that the strength needed for this position did indeed reside in his bulky arms. She guessed that the buoyancy of the water didn't hurt either. Her channel gripped him firmly and she sighed as he stroked in and out. His large staff seemed to soothe the aching inside her.

My top ten list (in no particular order) would be:

I don't know if I really go see movies or anything for my oogling. But I do like the better aging process on Sean Connery and Robert Downey Jr. and Johnny Depp. Chris Hemsworth and Gerard Butler are good on the eyes too!

My top guys change over the years...but right now Alex Skaargard is my go to with Jensen Ackles a very close second. I also think Colin Firth and Sean Connery are very hot.

1st let me say that this book sounds AWESOME! OK..LOL...here is my top ten list:
1) joe manganiello
2) patrick swayze (dirty dancing era)
3) marlon brando (streetcar named desire era)
4) ricky martin
5) hugh jackman (when he is buffed up like as wolverine)
6) ian somerhalder
7) alec baldwin (in the 80s)
8) Alex Skarsgard (as long as he isn't smiling)
9) jackson avery
10) my hubby (not the last but last on this list) LOL