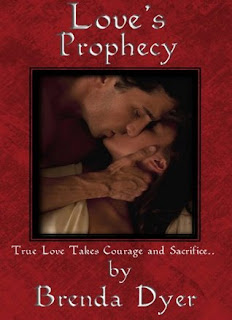 Lucifer vowed to destroy humans and take the Earth from The Creator. In secret, vampires were brought about to thwart Lucifer's plan. Locked in a battle centuries old, vampires guarded The Creator's children against annihilation from demons. But the era of a new breed of warrior needed to turn the tides of war has come. The time for the fulfillment of the Vampire Prophecy begins.

For Mel, a deadly vampire warrior sworn to hunt and kill demons in the dark streets of Vancouver, the mystery surrounding the Vampire Prophecy deepens when he meets Breeana, a human woman who not only bears the mark of the prophecy, but resembles the unknown woman haunting his dreams. A powerful link pulls him to her, overriding his willpower to stay away. When a vengeful demon spies Breeana in his arms, she is marked for death. To protect her, he must take her from the world she knows until he can eliminate the threat. But the real danger is the role Breeana must play in fulfilling the prophecy and the intense feelings she brings out in him. Mel is forced to choose between his obligations to his kind, the world, and the woman he loves.

Veterinarian, Dr. Breeana Spencer is tired of being disappointed by love. Although love and a family is her greatest desire, she decides her career, friends, and romance novels are all she needs. But when she meets a mysterious stranger, she's drawn to him by a connection so forceful it shatters all reason, leaving her incapable of resisting him. Yet there's more to him than smoldering good looks and a rock-hard body. As she's drawn deeper into his danger-filled world, she learns she's part of an ancient vampire legend. Breeana fears her future is no longer hers and will not include Mel. A life altering choice is before her—one that will take all her courage and love to make.
My Review:
I have had the unique pleasure of being proven wrong once again.  Anyone that firmly believes that there are no new twists to be had on vampires must read this book.  It was extraordinary!!  I am a HUGE fan of mythology and when a writer is able to re-write it eloquently, they have gained a fan in me for life.  This is such a book.  The story itself breathed life into the vampire world and made me eagerly imagine picking up the next book in this series.  She just has too many hotties and a fantastic storyline for this just to be a stand alone.
Breena was your typical work yourself to death so you don't have time to think about how lonely and empty your life is kinda girl.  She had an amazing career as the local vet and a part-time band gig where she released her inner wild child.  She longed for something more but her luck with the opposite sex had run out a long time ago.  It was easier just to stay busy than to try a work on a new relationship.  But when she catches a glimpse of Mel after her set is done, all bets are off.  He was beauty incarnate with a body that was solid sin.
Mel was my type of guy.  I have a thing for broody loner supernaturals that have a tragic past.  It just makes for a more interesting character and it just makes the story that much sweeter when he finally lets go and allows someone in their life.  Mel was just having a beer and looking for dinner when he he heard her singing.  It literally struck him dumb and he was helplessly drawn to the stage to watch as Breena belted out her next song.  He tries unsuccessfully to pull himself out of the haze that has engulfed him when he recognized Breena.  She was the woman he had been dreaming about for the last fifty years, the woman he knew was about to change his life forever.
Welcome to Mrs Dyers world where vampires are actually our shadowed protectors and demons are truly the cause of all misery!  Humans, demons, and vampires are all locked in a battle for Earth, literally.  But a prophecy has come to life that may end up shedding light on ending the war.  The creation mythology was very creative and this book was an amazing read!  I can't wait for the next installment in this series.  It Rocked!!

Yay, Brenda! You deserve every spider you got! Is the sequel ready yet? Huh, is it, is it?

Yay BD! Doin' the Irish-Jig for ya!
Charli

I loved seeing this:

Anyone that firmly believes that there are no new twists to be had on vampires must read this book. It was extraordinary!!

Thank you guys so much. I'm so thrilled with this awesome review.

Nikki, thank you so much for taking the time to read Love's Prophecy and for the wonderful review!