Review: Giving It Up By: Amber Lin 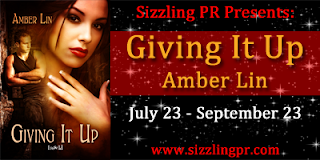 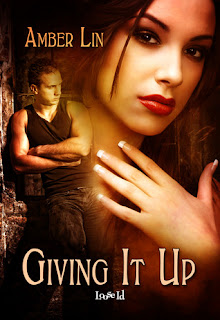 Allie prowls the club for a man who will use her hard and then ditch her. Hey, it's not rape if she wants it. Instead she finds Colin, who looks tough but treats her tenderly, despite her protests.

He tempts her, but kindness and a few mindblowing orgasms aren't enough to put her back together again. Allie has no hope for a real relationship. Two years ago her best friend betrayed her in the worst possible way – she’d be stupid to trust a man again. Besides, she has her daughter to think of, the only good thing to have come from that dark night.

But when her rapist returns, threatening her sanity and custody of her daughter, Allie turns to Colin. Under his protection and patient touch, Allie begins to heal and learns to hope. Colin’s no saint, though, and his criminal past draws danger of its own. Allie must fight to protect her child and the man she loves, hoping her newfound power will be enough to save them all.

I had seen this book on several other blogs and was instantly drawn to it!   And as luck would have it, it finally became available for review.  After reading it though, I can definitely understand why I saw it everywhere!  This book was fabulous!  This book hit home with me in more ways that I could ever imagine.  By the end of the book, I was balling my eyes out.  I'll warn you now that several parts in this book almost made me cry, but the ending through it over for me.  You will experience a whole range of emotions by reading this.  Bailey, which was Allie's daughter, provides a  bit of comic relief throughout the book.  As a mother of my own three year old, I laughed out loud several times as  Bailey's antics fondly reminded me of my own child's!! Allie herself was completely relateable and quite broken.  She says several times throughout the book that Colin saved her, but in reality they saved each other.  They were perfect for each other and it took Colin almost losing her to figure it out!  I highly recommend this book to anyone who loves romance. Just be warned, you will cry!!  Fabulous Read!!!

I really enjoyed this book...

I loved it too. I was totally surprised by it. I had thought it sounded good and I was looking forward to it. But it was nothing like I expected. And I still loved it. You are right about the emotions!