Review: The Legion of Nothing: Rebirth By Jim Zoetewey 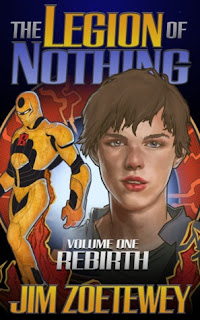 Nick Klein’s grandfather was the Rocket.

For three decades, the Rocket and his team were the Heroes League—a team of superheroes who fought criminals in the years after World War II.

But Nick and his friends have inherited more than their grandparents' costumes and underground headquarters... they've inherited the League's enemies and unfinished business.

In the 1960's, Red Lightening betrayed everyone, creating an army of supervillains and years of chaos. The League never found out why.

Now, Nick and the New Heroes League will have no choice but to confront their past.

I enjoyed this dip into the next generation of super heroes.  It was intriguing and realistic.  The kids expressed their fears and emotional hangups, making them seem more human than super.  It was a welcome change from the gung-ho type we are used to.  Even though they were proud of what they were, they still had individual reservations about actually following in their grandfather's footsteps.  This is a plot that has been brewing since their time and it is up to this generation to uncover it.  Nick is the main character.  His grandfather was The Rocket and left quite a legacy to live up to.  I really believe that's why Nick was so hesitant to join in the game.  It made for quite an interesting story.  You even get a flashback from the past to help you understand why things are the way they are.  Over all it was an interesting read and I would read another by this author.  I have a super-hero thing :)  Good Read!!

Thanks for the review.

To be honest I was a little worried since it's a bit of a departure from what you normally review.

I'm glad you enjoyed it.

good choice, looking forward to read it all.

My son would love to read this!

It sounds amazing. I can't wait to read this book.

Excited to read this book after finding out about it.
sellcrystal2[at]gmail[dot]com

been reading this over at the site for ages now - glad to see its got yet another fan, it definitly deserves it

Great review Nikki! I'm with you on that one, it was definitely out of my genre as well, but like you, I enjoyed this book immensely ^_^ I thought I was gonna die of romance-withdrawal, but I pulled through! I just about sqqqquuuuueeed in my seat when Haley and Nick went on their "coffee date" sowwy for that spoiler folks.

I really want to read this..

I am so glad to read that tour hosts and commenters alike are liking the book. I have many books in line waiting for me to devour them, but as I read more excerpts and positive comments, I just may obtain this one and open it soon.

Hope I win so I can read this. Nice review