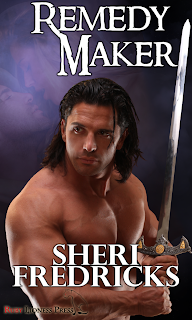 Man by day, Centaur by night, Rhycious is a remedy maker who needs his own healing.  He's the royal physician, famous for his cures. War and posttraumatic stress disorder has broken his spirit, preventing him from finding true happiness. Then a direct order from the queen to investigate an uprising forces him out of his secluded cabin at the edge of the forest.  Patience is an optimistic, good-natured Wood Nymph who works as a mediator to ensure harmony within the Nymph sector. Environmental pollution in the aquifer stream that feeds the taproot tree of her heart is slowly killing her. Resigned to the fact she will not live long, she sets out to discover the mysterious disappearance of her sister.  Experience has taught her to deny herself the love of a male, but the gruff Centaur is different. He doesn't push his expectations on her, only his healing nature. When Rhycious loses his grip on reality, he believes his inability to control his disorder will drive Patience away. Nevertheless, desire flares, and Patience draws him close. Kidnapping and betrayal turn their mythic joint venture into a deadly bout.  Will their love endure when survival hinges on trusting each other?

My Review:
Paranormal Lovers beware!!  I am about to add an enticingly new favorite hero to our list of shifters, weres, and vamps  And this hottie comes with four legs and extra thrusting power...lol!   Rhy is a loner, hiding from the world in his self-imposed prison in the middle of the forest.  He seperated himself from the others to hide the onset of a terrible disease that started plaguing him after the great wars.  He was a healer at heart, greatly enjoyed his work, and added daily to his knowledge of medicinal herbs and plants.  He led a quiet life with only his crushing memories for companionship.  At least until the day an injured woman was brought to him.  And after that, his world was literally turned upside down.
Patience was born after the great war so incurred no baggage or hate because of it.  She was young and carefree and planned to live her days happy.  What she did know was that her days were numbered.  As a wood nympth, her health and lifespan was connected to that of her tree.  So they had longevity, but were not immortal.  But Patience was sick. Her health began to decline over the last few years, but she was determined to go out with a bang.  That is until a group of hunters caught up with her and knocked her out.  Imagine her surprise when she awakens in the house of a Centaur!  And an incredibly hot one at that!!
The chemistry between the two is almost immediate, even though they are from different species.  But there is a plot brewing to kill the queen and overthrow the peace agreement.  I really enjoyed Rhys character.  For being alive for so long, his condition was believable, as was the way he choose to live.  After being surrounded by so much death, what better way to cleanse the soul than by healing others?  Patience was the comedy break in the seriousness of the goings-on.  She had a way of speaking that puzzled everyone and was funny. It actually is nice to read about a NEW type of paranormal entity. I can't wait to see where this story goes because the ending leaves you with so many things unfinished!  There has to be a sequel!  This was an excellent read and I highly recommend it!!

AWESOME review! And much deserved!

I have never read about a Centaur before so this would definitely be a new experience for me. Thanks for the review.

I so agree! If you ever read this hero, you will never forget him!

Nice review. Never read a book that had a Centaur in as
the hero of the novel before.Definetely want to read it now.

Definitely a new one - a centaur hero! Thanks for the great review; definitely something to check out.

Great review for a great book!

5 spiders huh, definitely will be adding and reading. Love that this has an element of humour too x
Awesome review.

The cover alone calls to me!
Congrats, on the five spider review.
Neecy

Since my comment on the interview page was so long I'm just going to say........cr*p I don't have words. This sounds Amazing and your review in all it's steamy, funny, very descriptive teasing enticement has me sold! :) Killer & fun review! Thank you for sharing!! :)

I love the homeopathic healing idea.

Thanks much for the review.. it sealed the deal and I'm definitely reading Remedy Maker SOON!

Thank you for sharing your review with us. I love it when there is a bit of humor with the intrigue. Definitely looking into this read :)

oooooooooo a centaur..now that IS new! I have to read this!!! Thanks for introducing me to it!