Giveaway and Interview with Lilian Grant and her book Male Review Happy Saturday everyone and Welcome to this stop on Lilian Grant's tour!!  I was lucky enough to catch Lilian for an interview and this is what she had to say:

How old were you when you first realized you wanted to write?
I’m not sure I ever did realize I wanted to write. About six or seven years ago I met some friends online and we used to do some role play and write stuff for our own entertainment. One of them was writing and trying to get published and she suggested I do the same.

Most authors have an unusual story or way that they come up with their ideas for books…Do you have one?
Not really. When I am writing a book I am sure it’s the last one I will ever write because I’ll never have another idea again but something always comes to me. Usually it’s a character or just one line that sets me off and another story is born.

What was your biggest influence that steered you towards writing?
Fun. I met some people who loved to make up stories and I was hooked.


I have to ask, what are the hardest scenes for you to write?
The hardest scenes to write are the ones in the middle of the book. I don’t plot and by the time I am about twenty thousand words in I have a fair idea what the ending will be but it seems such a long way off and I get terrified I won’t ever get there. Writing at that point starts to feel like swimming in molasses.


Are sex scenes difficult for you to word?
They can be. There are only so many things you can do and only so many names for body parts. It can be difficult to keep things fresh, not to lose the romance and to write a scene that is emotionally and sensually satisfying. I usually take a few passes at it. The first draft is more like a how to manual, ‘insert tab A into slot B.’ The next couple of rewrites add in some sensual detail, taste, smell, sensation and emotional and physical reactions. They take longer to write than any other scene in a book.


Do you see yourself writing in another genre?
I write romantic suspense and I am about to write an urban fantasy, but no matter what, my books will always have comedy in there somewhere.


Has your family been supportive?My kids always said they wanted to keep what I did secret but both of them have told their friends and girlfriends. I think they’re proud of me. My mum and my sister have read my stuff but I think my husband is still in denial.

Are any of your characters reflective of you?
I think a lot of my characters have bits of me in them. If not the real me then the me I would love to be. Meg in Male Review is very accident prone. I too have my moments, like overbalancing when reaching for a packet of frozen peas and toppling head first into the chest freezer at the grocery store.

What do you like to do when you're not writing?
I am currently renovating my house and I actually love decorating. I am also a voracious reader. I am currently reading my way through JD Robb’s In Death series and JR Ward’s Black Dagger Brotherhood series.

Who is your favorite book heroine?
Eve Dallas from JD Robb’s In Death series. I love tough no nonsense heroines.

Do you have any unusual habits that revolve around writing?
Unless drinking red wine and eating chocolate is unusual then I would have to say no.

What is you favorite mystical creature?Oh, I’ve never thought about it but I guess I would have to say vampires but the ones you find in JR Ward’s Black Dagger Brotherhood Series.

What were some of your biggest challenges at the beginning of your career?
Finding time to write was, and still is, a huge challenge. I steal an hour at lunchtime and escape to a local car park where I tap away on my laptop with the CD blaring away. I am sure the people who come and go as I sit there wonder what on earth I am doing.

How do you feel about reader comments?
I love reader comments. Even if they’re not positive they all teach me something and I just love to know people are reading what I have written.

Do you have any advice for new authors?Never give up. No matter how hard it all seems and how many rejections you receive every word you write is a page closer to publication.


Where are your books available?
They can be found at Amazon, All Romance Ebooks and Fictionwise


What can we expect from you in the future?
I have a humorous romantic suspense set in the 1990’s coming out in August. The story is called Go With the Flo. My heroine joined to find her Edward Scissorhands but instead finds herself on the trail of her missing ex boyfriend and personal flasher. When she drags her best friend Nelson along things get more complicated as he appears hell bent on seducing her.


I have also just finished writing Book Three in my Reigning Men Series. Hot Male continues the complicated romance between Meg and Sam but it is really Michael’s story.

Where can we reach you and become informed of updates?
You can find me at www.lilliangrant.com and on Facebook. 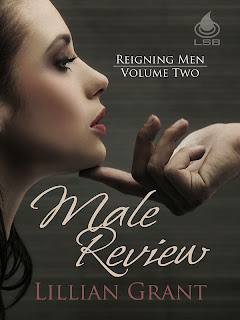 Sam Stephens and Meg Riley are in love, and finally on the cusp of sex anytime, anywhere, anyhow. That is until Meg’s Great Aunt Maud, the octogenarian nymphomaniac, gets tossed out of the old folk’s home and moves in with them, closely followed by her polar opposite, Meg’s scarily frigid mother.
Meg’s best friend Laura convinces Aunt Maud to invest in Male Review, a BDSM-themed male strip joint. For Meg, it’s just one more step along the path to disaster, made even worse when former prostitute Michael is hired as the bar manager. After all, Laura’s last venture ended with Meg being arrested as a pimp. And Michael’s to blame for the crazies invading Meg’s home, and even worse, he still has the hots for her.
If she wants to get her life back, all Meg needs to do is find a new home for Maud, resolve the dispute between her warring parents, keep Michael at arm’s length, and rescue her relationship with Sam before it disintegrates completely. Male Review appears to be just one more problem to deal with, but perhaps it could provide an unexpected solution.

Wow now that's a tough question. I used to work as a bartender in a strip club and male dancer night was the worst. The women are crazy and cheep ( no tips at all) and the guys were always so arrogant. What a pain in the ass. Still we had a pair of brothers in one night that I would love to watch again. Both really hot with long blond hair and some great moves. I don't really go for the dress up thing so costumes really matter to me. As long as they have the right moves I'm all for it. :)

Great Interview!! Thanks for the chance to win. That is a tough one but I would have to pick (I forgot how many I was supposed to pick LOL)
Channing Tatum, The Rock, Pitbull, Tom Cruise and Adam Levine. Thanks again!!! Have a great weekend. This is a new author for me~so thanks for sharing. Can't wait to read!! :)

Hey there, what a great interview Lillian! The new book sounds like it is gonna be great too!
Now, three males stripping for me would have to be: Channing Tatum, Kellen Lutz (Emmet from Twilight) and Ian Somerhalder. MMMMM what a nice fantasy! LOL

hmmm most of the hot guys I like aren't buff so this is a difficult decision. Not to mention I don't want to sound like a total cougar, I think Robert Downey Jr and Johnny Depp for sure, I think maybe Brian from The Sinner Olivia Cunnings books Rock Hard and Back Stage Pass.
Thanks Carin

LOL! I LOVE this question! Although my answer may disappoint, not me, but maybe most everyone else. Easy answer and I'd die happy if it ever happened! Adam Lambert, Adam Lambert and Adam Lambert. Sorry, but he is my Dream &#^%$@%*(!$4#^ ;) Although, I don't think I'd want him to do a strip tease. I think I'd rather just rip his clothes off with my teeth and dive right in!! OMFGILHSFM

It would have to be Taylor Kitsch, Paul Johansson, and Joe Manganiello. I know, all 3 are so different!

Hard choice. Most of my dream guys are from books, lol. But to go by some actors that I think are HOT...Channing Tatum (even though I am a few years older than him, not so much that I feel totally Cougarish), Charlie Hunnah (Sons of Anarchy), and for a dark haired hottie Hugh Jackman.

What a question! My ideak 3-men line-up...Hmm...Well I should say I have a major True Blood addiction so my first & second choices would be Alexander Skarsgård and Joe Manganiello followed lastly by someone not True Blood related, Jensen Ackles

Great answers and I do love that my fellow countryman Hugh Jackman got a mention. My friend got in a life with him once and he laughed when she was completely dumb struck :)

Great Interview!! Thanks for the chance to win. I think Tom Cruise, Adam Levine and Orlando Bloom :)

Great interview and fab question. Ooh, the possibilities.
How about:
1. Joe Manganiello - sex on legs, with one of the most amazing bodies ever!
2. Chris Hemsworth - Simply *sigh*
3. Ian Somerhalder - the most mesmerizing eyes :)

I would very much appreciate the opportunity to be considered in your very generous giveaway.