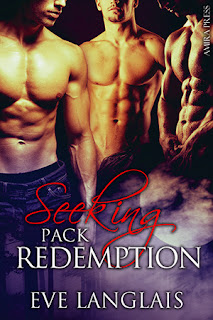 Sometimes even outcasts can earn forgiveness.

Thrust into a nightmare, Thea thinks all hope is lost, until an unexpected rescue by three strangers. Forget returning to her old life though, because not only does a psycho vampire want her back, a trio of wolves wants to claim her as their mate.
What started out as a search for his missing sibling, turns into a rescue mission of a woman who makes his inner beast howl. Trent knows it wrong to want his dead brother’s mate, but he can’t help himself, and neither can his friends. However, danger stalks the one they want and they’ll have to face true evil before they can set her free.

And for an outcast wolf, the path to redemption is lonely. Can Jaxon ever atone enough to be welcomed back to his pack and into the arms of the woman he loves?

Outstanding!!  I have a thing for shifters and Eve has done a wonderful job of including my multiple partners fantasy in her writing!  Most shifters mate for life and yes that is a wonderfully attractive feature, but what if you felt that way for two or more of your pack mates?  Talk about things never getting old in the bedroom!!!  Eve has created a delightful new world where half-human females can have their cake and lick it too!!

Thea had a horrible chocolate craving...pretty normal for a pregnant lady.  Actually ALL cravings are normal but speaking from experience, chocolate craving just cannot be ignored.  So she slipped out of the apartment to buy some groceries to satisfy the cravings, never realizing that this would send her already unstable boyfriend over the edge.  She was gone for 15 minutes tops and David was waiting for her when she got back.  She really couldn't understand what happened to the sweet and caring guy she fell in love with.  Over the last month he had been replaced with a cruel and moody stranger.  Today was evidently a bad day by the look on his face as she approached the door. He went livid when she walked in and told her he was bringing her in.  She wasn't going anywhere with him.  But what she didn't realize was that her journey to finding love began with this phsycotic man.

Trent had finally figured out that his brother had gone rogue.  David had been lying to him the whole time and had actually been away from a pack for several months.  He found out this info out just before he decided to break rank to go and find him.  He was loyal to his pack, but David was all that was left of his family.   It was no surprise that his two best friends joined him in his search.  But what Trent ended up finding was a whole lot more than he bargained for.

This book was a great example of finding love in the most unusual places.  Running from a mind-controlling vampire who was trying to breed an army of Lycan's loyal to him was a great example.  Thea is immensely attracted to Darren and Trent and battles with her guilt for a while.  But with all that yummy nakedness running around, she was doomed from the start.  But can she handle being a pack mate and the fact that she maybe a Lycan herself?  This was a great addition to my ever growing pile of Eve Langlais yummies.  It had some hot menage scenes that left you wishing to be Thea.  Excellent Read!!