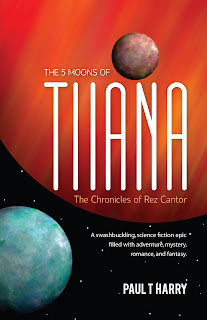 Captain Rez Cantor is a diplomacy officer in the Imperial Army, and personal attaché to Princess Leanna, the sixteen-year-old daughter of the Emperor, and sole heir to the Melelan throne.

On the eve of a treaty signing ending the twelve-year-war between the alien-hybrid Relcor and the Empire, Rez Cantor learns that the Imperial family has been slated for death. Under orders from his Queen, Rez is given his final command–save the Princess at all costs.

Overcoming incredible odds, Rez abducts Leanna, and the two flee Melela along with others of the Imperial guard. Unfortunately, their ship is nuked as it enters warp creating an event horizon that sends the ship 128,000 light years across the galaxy to the Moons of Tiiana. It is on one of these moons that Rez awakens on a beach–injured and alone–without the Princess.

So begins the sojourn of Rez Cantor upon the Moons of Tiiana: Five moons stagnating from a 2000 year-old war that has left its alien races in limbo and decay. Five moons that crave a hero bold enough to lead its people out of the darkness. Five moons that hold the future of the Melelan Empire deep within the ashes of war.
My Review:
I must say this was a truly enjoyable read!!  It has an extensive plot and the races that were created were unique and completely fascinating.  Our story begins with an empire being enslaved.  The peace signing was all that the Melelans wanted, but nfortunately it was not to be.  The Relcor plan on assassinating the royal family on the day the treaty is to be signed. The plot is uncovered and those select few still loyal to the family make their own plans to save their princess.  This is where our unlikely hero Rez Cantor comes into play.  He wasn't the highest ranking official, but he was one that the princess and the royal family trusted.  So they set him up with supplies and a way to break the princess out.  While the plan unfolds and he rescues the princess, he ends up doubling back because he has no idea how to fly the ship they have hidden away for him.  Rez ends up almost doing some kidnapping of his own to convince Phillip to come fly the ship and everything looks like it may work out, and then they are attacked.
You are introduced to the first moon when Rez wakes up, without a ship, Phillip, or a princess, on a strange stretch of beach.  This beach has this ominous cloud that looms around the planet.He is trapped on a small island, injured and weak, with no memory of how he came to be there.  His foraging does not go well and he forces himself to make a hop over to the next island.  Along the way he makes friends with the local wildlife and is captured by the native people, who just so happen to live under-water.  Rez receives some surgical implants that enable him to breath underwater, and then is forced into slavery.  He is there for a few years before he starts amassing a plan of escape. But this is just the first moon and fate has much in store for our hero.
Over the course of many years, Rez makes his way around the moons and is thrust into a war that is killing all of the planets.  It was started by one race's arrogance that provided technology to under-evolved species.  They just weren't ready yet.  But Rez has been seen by many as the one who will end the war.  But can he puzzle out all of the clues before its too late?
I was completely wrapped up in this story!  It had amazing details and I loved the races that were described.  All were unique and enchanting in there own way, even the more primitive ones.  I look forward to reading more from this author!!!  Excellent Read!!

Thanks ever so much for the wonderful review. I hope your readers will enjoy the story as well. If anyone has any questions I will be checking in through out the day and availing myself to answer them. Thank you, again.