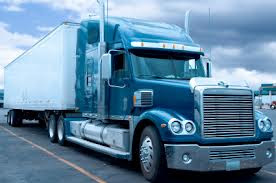 Good Morning my fellow Naughty Lovers!  Today I have my fellow blogger and author Nandi Berry with me to talk about her book Knights in a Shining Semi.  She wanted to share with us the inspiration behind this hot little short.  Nandi blogs over at Getting Naughty Between the Stacks, so while your here, click over and check out her blog:)  There is always something Naughty going that way too!!  Take it away Nandi:

The Story Behind the Story

Hi and a big thank you to Nikki for letting me post today. I'm going to let you in on the inspiration for my short Knights in a Shining Semi. During the summer I was sixteen I had a life changing experience. I went on the road with my aunt and uncle who were truck drivers at the time. I had (have) listen to stories of their travels on across America and then I got to go.

I wasn't as glamorous or the high adventure I thought it would be. There's a lot of doing nothing when on the road, a lot of fast greasy food, and not a lot of places to shower. And let me tell you three people in a cab with no AC crossing the Arizona desert in 100 degree weather things get a little ripe. But one thing I did learn is that overwhelmingly the people are wonderful. It was kind of amazing, there were all these gruff looking truck drivers who were the nicest people you'd ever meet. I saw awesome natural wonders, and I highly considered never coming back from Montana.

At a family BBQ my uncle brought up the trip, and regaled everyone with his favorite story from it. We were in Montana and stopped at this rinky dink truck stop in the middle of now where. My aunt and I went inside to get some food, use the bathroom etc. While we were looking my uncle comes in to get us and pay. According to my uncle there were three guys in the store. Two were falling over there tongues trying to check me out without being noticed and the third guy was in love with his horse.

Now this is much funnier when my uncle tells it because he gets all animated and pulls his hat down to show how the cowboys were being sneaky. But anyway I got thinking and I won't get into my bizarre thought process but the story started to form and then it took on a life of it's own soon Knights in a Shining Semi was born. 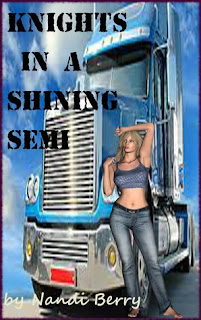 Left on the side of the road by her boyfriend, now ex, she’s left with no choice but to hitch hike. She’s picked up by a couple of truck drivers, who are more than they appear to be. A surprise turn of events brings Morgan into the arms of the two men… her knights in a shining semi.

Warning- This book contains a jerky ex-boyfriend, two hunky truck drivers, a Menage, and sex in a truck-stop shower.

Morgan had taken a week off to go with her boyfriend to settle his father's estate after his death, is shocked to discover that Rick's father left everything to her.  Rick is furious with her and kicks her out of the vehicle, in the middle of nowhere, on the side of the road.  Upset, but figuring he will turn around, Morgan starts up the road.  An hour later, she realizes that he isn't coming back, and begins to panic as she concludes that hitching is her only course of action.  Luckily for her, all guys aren't Rick and what she had been waiting for all her life just pulled up in a shiny Semi!
This was a cute hot little short with some yummy menage fun!!  Morgan ends up getting 2 hot guys for the price of one!  :)  And there definitely is a wickedly hot shower scene!  Great Read!

Thanks Nikki! I'm so glad you liked it.