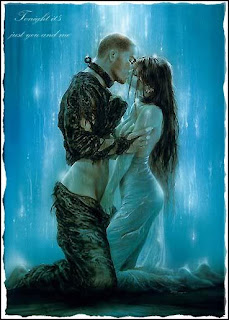 Good Morning My Delightfully Decadent Subscribers!!  Today is a special treat because I have opened up my torture vault and uncuffed one of my favorite little submissive male authors so he may entertain you today!!  Well, I was GOING to let him entertain you but it seems I am unable to remove the ball gag, and might take him a while to be able to use his hands.  Dear me!   How long has he been down there?  *Evil Grins*  But you like it down there don't you Jason?  Yes you do!! :)  Ok so Jason isn't exactly up for my pleasure right now so you'll have to make do with me...MUAHHHAAAH!!  But what I do have is some book detail and an excerpt from his 3rd book in his wonderful series!!  Let's take a look:

The Coming of Light Blurb:

The Wizard Crystals of the Elements have fallen into the hands of Abaddon, forever corrupted and transformed to evil. Abaddon now patiently waits in his northern kingdom for the coming of Saruinkai—the evening when the spirits of Darkness rule the night, and when he will unleash the Crystals' horrific powers against their own elements and sweep destruction across the earth.
The Light's hope now lies in the young Nasharin warrior Darshun Luthais—the chosen Guardian, for he alone carries the power to stop Abaddon's black sorcery and end the war once and for all. But to do so he must cross over into Abaddon’s kingdom, and that means destroying the one who guards the border, a Fallen Angelic Throne, the secret to Asgoth's three hundred year Rule and invincibility.
Led by the elvish lord Caelestias, Darshun and his companions must seek out and destroy the Throne, encounter a Witch, and a horde of other vile creatures, only to stir up the entirety of Asgoth, coming face to face with them, a battle that will determine the fate of the world.

And Our First Kiss Excerpt:

As if reading his thoughts she came closer to him, so close he could have kissed her, her warm breath soothing. But that ever-beautiful and dominant gaze made him bow his head.  She had power, not physical strength, rather, a sacredness in truth, love and compassion.  And it made him tremble.  She put a finger under his chin and lifted to see his face.  “Do not fear me, I mean you no harm, child of Abidan.”
“Lady of Light, please tell me; who are you?”
Curving her lips into a smile that melted his heart she answered, “Someone who loves you dearly.”

I love Jason's work :)  Ok Jason it's time to go back into the play...err torture chamber..Wave Goodbye!!  I might let him come up for air if  he is really nice :) and note to self to remember to feed him!!  Have a great Saturday!!

Oh la la, what a great excerpt! Too bad Jason was occupied, but I guess it didn't matter too much since we still got that great teaser!