First Kiss with Legend of the Inero Dragons By: J F Jenkins

Hello CEWTNK~!!  Today is an extremely busy day and I'm, sooo excited about everything that I am starting early!!  I am a tour stop on JF Jenkins book tour, and am offering up a copy of the first and second book in the series (Lucky guys!) in a giveaway that will be posted on the blog hop page!! J F is going to share with us a first kiss excerpt which is then followed by my review!  It was a great book!!  Take it away JF:
THE FIRST KISS
That perfect moment where you're looking into your significant other's eyes, and all you can think about is what their lips will feel like against yours. All you want to do is know, and so you lean in, hoping they'll want it too, and BAM the first kiss happens. In the media, it's usually painted as some kind of magical moment between two people. In reality, if it's a true, first kiss, it might be kind of awkward.
Those are my favorite first kisses to watch in the movies. They're especially fun to write. In “Legend of the Inero Dragon” there is a first kiss moment. I won't give away too many spoilers but it's by far one of my favorite kiss scenes I've ever had to write. What made it so special though was the fact that it was a true first kiss. Awkward, sweet, tender, but still special. The first kiss can tell a lot about a person. I've had first kisses that missed the sparks and only had the awkward going on with none of the sweet and tender. Then I've had a first kiss that was awkward, but had the sweet and tender as well as the special.
Another first kiss that was fun to write was one for an upcoming novel I have coming out. In it, the couple who is on-again, off-again, gets back to the on-again stage. It's the kiss that tells them whether or not they need to keep being together again, or call it quits for good. Again, no spoilers, but it was fun to write something that represented such a trying and meaningful time for them both.
The kiss is powerful, the first kiss especially so. The more real and heartfelt they are, the better. There doesn't need to be violin's playing and roses involved. Things probably won't go smoothly, but if the love is there, then that's what makes the first kiss, true love's first kiss..
And now on to the good stuff!!  Here is the book blurb and my review: 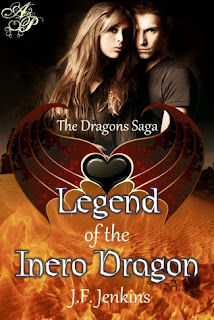 Twin brothers Jason and Matthias Inero are the favorite sons of the great dragon lord of fire. More often than not they get whatever they want. Matt wants to do great things for his people while Jason wants to go off and explore the world. Both can have what they desire, but not until they take a bride and enter into adulthood.

Enter Kat and Gwen, two girls from very different backgrounds. Kat is happy to leave her home when the royal guard comes to bring her to loving arms of her childhood sweetheart, Matt. Gwen on the other hand is livid to be taken from her farm only to be thrust into Jason's life, and he's not to thrilled with the idea either. They have one year to find happiness with each other, or else they will be placed at the mercy of the ruthless dragon lord Lynx. Favorite or not, dragon law must be obeyed.

As their nation begins to prepare for war against a neighboring tribe, the brothers find themselves as key components in the battle plans. A dark prophet has had a vision of Inero victory, but at what cost? Both must decide where their loyalties lie and what they're willing to sacrifice – including each other – to achieve their goals.
﻿My Review:
This story begins with the selection of a group known as the Elite.  Young girls are stripped from their parents when they come of age.  This story takes us through the process by focusing on the twin boys and their chosen mates.  Matt was lucky.  He had met and fallen in love with Kat 5 years before the selection process even began.  He could never tell Kat how he felt, what he was, or that he hoped she would be chosen as an elite so they could be together.  All he could do was be there for her when she needed him and hope that through his friendship, he could gain her love.  He was ready to give up everything and run away with her if she wasn't selected.  His heart beat solely for her, and there was no other for him.  Matt was determined to tell his father of his wishes, only to be smiled upon because his feelings for the girl were so apparent.  Of course she was chosen as an elite, his father assured him.  His twin Jason, however, wasn't as fortunate.  He had no interest in marriage, or mating and hated having to go through this.  But this was a rite of passage, and a necessity.  When he entered the room and looked over the females that had been chosen, his eyes were immediately drawn to Gwen.  She wasn't the most beautiful or the curviest, but she seemed to be the only one there that really didn't want to be there.  It was that honest expression that drew him to her and his choice was made.
This really was quite an enjoyable book!  You start off thinking the characters are all given to you at face value, good twin and not so good twin, which ends up throwing you completely off balance towards the middle of the story.  The political churnings inside the book are surprising and there is a lot going on behind the scenes that is only hinted at during the book.  This book leaves you wanting to dive into the next because of all the unanswered questions.  It truly keeps you on your toes as far as guessing want is really in store for our characters.  Its hard to say which character is being totally honest, not only with themselves, but with the others involved.  I did enjoy Navi.  This was the twins stepmother, and was in her own rite, a story inside of another one.  I would have liked to have known more of her story.  But I suspect those answers are going to be waiting for us in the next book!

I read the first book in the series and I really look forward to this one.

Thanks for sharing your review!