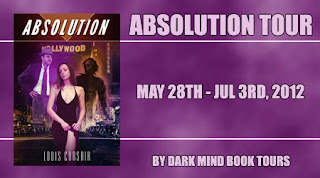 Hello and Welcome to this stop on Louis's tour!  This book had quite a unique premise, and was curious as to what inspired this book.  This is what Louis had to say:


It’s sunny and warm in Los Angeles County. In the streets, it’s difficult to look at anything because of the glare. In tight spaces like public buses, you sweat because the air conditioning is not sufficient to fight off the heat. Around you, men and women stir restlessly. Sweat forms on your forehead and you catch a whiff of body odor here and there--was that the stench of urine that hit your nose just now?

When men and women of different races and different cultural backgrounds sit in tight places like Los Angeles, trouble stirs. It is hot, more than the temperature of 70 + degrees accounts for. It makes your skin itch to hear music played too loud or conversations spoken in some foreign language--just why are they laughing while looking at you? Someone will pick a fight somewhere, a gunfight will ensue--maybe in Compton or Watts, but it could very well be in the Valley or Long Beach or Santa Monica. Did you hear about the Asian students shot in their BMW near the campus of the University of Southern California? They think it was a carjacking gone wrong. Here carjackings go wrong and people die.

Nikki asked me what inspired me to write Absolution. This is the answer: The city. Los Angeles brews with cultural diversity. We live here and believe that if you throw us all in the same pot that we will learn to love one another. It’s what I call the urban fantasy of modern America. But we try.


To a writer, this city is golden. I’ve often been asked why I don’t use an exotic location, like the Bahamas or Egypt, in my stories. Why? Everything you need to write a story about the human condition can be found right down the street, down Wilshire or Hollywood Boulevard or maybe Grape Street or Sunset Boulevard.


I don’t mean that we have plenty of tourist attractions--these are exotic too. True, we have many places that tourists love to visit with their cameras. Have you seen the Venice Canals? Just like the city of Venice, Italy! Just be careful with the Skin-heads. What I meant is that there is ample magic in its neighborhoods and communities, enough to create a world of stories. It’s just that this is not Middle Earth. We have an assortment of gangs, not elves or dwarves. But I digress...


Even with the cool air from the vents filling this near-empty hall, sweat still forms on my forehead. A Hispanic woman in a sundress came in and ordered something from the Subway restaurant. Most young women here are in skimpy attire. It draws attention. It didn’t help that the Hispanic gal was good looking. Quickly enough, eyes found her. One fellow in particular stuck with her after she received her sandwich. He tried to make small talk. He was awkward, his speech blurred with excitement. She was polite. It was creepy. He held the door open for her, but she lingered at the drink dispenser. He didn’t leave and tried to start a new conversation about the Clippers losing and the Lakers and their chances. It was creepier. I instinctively turned to where the emergency station sits with its blue button of safety glowing just in case. Just in case more sweat formed on my face.


I didn’t pay attention, but when I next saw her, she was alone, eating. Women could write entire novels about such encounters. This city is a wonderful backdrop for them.
Let me clear something up. The entire city of Los Angeles isn’t one big gunfight. This is the City of Angels after all. There are decent men and women struggling to find some balance, but they are only human and sometimes they break. This city can break you. If you visit Santa Monica College you’ll see what’s left of men and women after they break. The broken wander in the cafeteria, trying to mingle with the students who want to transfer out of there as soon as possible. Every semester they are there. Teachers will sometimes allow them to sit in their classes--most can’t afford to pay tuition or rent or clothing expenses. What stories they could tell!


But this is my city. I will probably die of old age here. And until I do, I will continue to keep a pen hand and a notepad, listening to the melody of urban life. There are stories here and I will try to record as many as I can.


If you pick up Absolution, just know that the setting isn’t just a prop. It’s the place I call home.

Now let's take a look at the book details and peek inside: 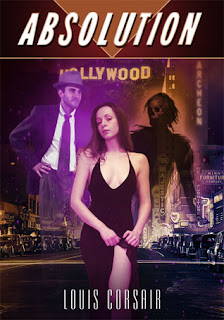 In 1947, a gangster murders private investigator Raymond Adams. In 2011, he's brought back to life for 24 hours to solve the supernatural murder of a Hollywood Adult film star.

When the son of a Pit Lord is murdered in Hollywood, the celestial beings in charge of the Four Realms ask Raymond Adams to figure who did it and find the victim's missing soul. Without memories of his life, he accepts the case to gain eternal peace. But the job is daunting:

With only the help of a possessed cop and a medium, Adams must trek through a Hollywood underground filled with pornography, prostitutes, the homeless, and sadists, along with supernatural monsters. But can he solve the case when his own haunting memories keep surfacing, telling him exactly what kind of man he was in life?

I was in a preparation chamber made completely out of light. I hovered like a cloud watching child-like celestials regenerate and reanimate my corpse. They didn’t bother with new clothes and simply fixed up the suit I had been buried in. When finished, they vacuumed me into my old body, a loving experience I could only compare to dying.


“Cold...” I said and my throat was dry like the Mojave in the middle of summer. They explained my body was mostly dead but this would improve as time passed. To help me with the shivers, the merciful celestials threw in a brown overcoat, shoes, and a fedora.


“Gun,” I said. True I was dead, but the people I was going to deal with were not and I had a feeling they would want to stay that way. Protection was necessary.


They gave me a revolver loaded with ten Thunderbolt bullets. I also got a good watch to keep track of time, an enchanted magnifying glass, and a special rune to communicate with the Committee. The big people wanted regular updates on my progress.


The celestials opened a portal to the Realm of the Living and sent me through it.


Louis is running a tour long giveaway for a great prize pack which is international!  You can check out the details here.  Would you like a chance to win a copy of this book?  Just fill out the rafflecopter!!  Can't wait?  Well Louis is running a special on it throughout the tour!!  You can pick it up for .99!!!

don't see how 24 hours could be long anuff.will have to see how you do it.

right now reading Shadowfever by Karen Marie Moning I'm in Suspense waiting to find out what next's.but do not know if that is the type of suspense your talking about

I haven't read any suspense books lately, so I don't have a current favorite. But this one looks really good. I'm definitely putting it on my to-be-read list!

Gone Girl by Gillian Flynn was pretty cool. Thanks for the giveaway :)

I'm currently reading The Sounding by Carrie Salo. It a great paranormal/suspense story.

Thank you for hosting me, Nikki. I hope that answered your question about what inspired me.

Look interesting, i wanna try reading this book. Thanks for sharing :)
My favorite was The Dexter Series :)

Thanks so much for the contest!!!