Giveaway and Tour Kickoff For Storm by Bernard Lee Deleo 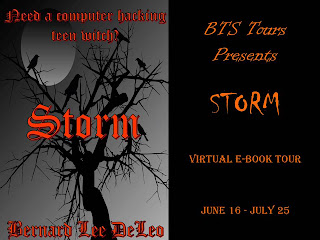 Hello and Welcome to Bernard's Tour Kickoff!!!  I was lucky enough to score an interview with him and this is what he had to say:


How old were you when you first realized you wanted to write? In eighth grade English class our teacher had us write a paragraph describing a storm. The next day she read only mine out loud in class, praising it, but she gave me a B.

Anyway, that was the first time I had an ambition to write.

Most authors have an unusual story or way that they come up with their ideas for books…Do you have one? With dialogue, idioms, and mannerisms, I’m like a human succubus. All ages and gender, under every imaginable real life scene I happen to be around in, I bleed my unknowing human targets to feed my fiction. For ideas to tackle in my novels, anything that strikes a passionate note in my head can trigger a theme. I read once about an eleven year old boy escaping from these human monsters in San Francisco. He led police back to the monsters’ van where they found a missing three year old girl. I created one of my new novels THE PROTECTORS around that idea, and what would have happened if one of the police officers had snapped, executing the monsters, and setting up a scene of self defense as the beginning to the novel.

What was your biggest influence that steered you towards writing? The creative writing professor in my first quarter of college after the service was the one who started me writing seriously. He made me believe I could write fiction novels.

I have to ask, what are the hardest scenes for you to write? Any scene I have to slow the pace down yet achieve a heightened interest from the reader. I avoid info dumps, and mind numbing description, so it’s a challenge to provide what the reader needs for a scene or background character development. Those items need to revealed, not announced. That can get tricky.


Do you see yourself writing in another genre? I have written in different genres since the beginning. I’ve written action/adventure, political intrigue, paranormals, erotic/paranormal, science fiction, and three YA novels. That will continue for me, because I hate being stuck in one genre. Point of View is more of a challenge than genre. My recently released novel HARD CASE is the first time I attempted first person POV, rather than third person. It was without doubt the most difficult, because everything must be related through the main character… everything.

Has your family been supportive? They’re supportive, but frankly, I have a day-job, so it’s not like my writing over the decades has been a financial burden. My late brother Paul was my biggest fan. We lived in different states, and he’d pressure me for a new novel all the time, while rereading the ones I gave him. He’d even call me up, demanding to know if I killed a particular character in the novel he was reading; because he would then threaten to quit reading it if I told him I did. He was really the only support I ever actually enjoyed. I write for myself. If a writer writes to please someone else, the editing will kill them. When you go over a manuscript a hundred times that you have no passion for, the editing will become a tedious albatross that will haunt your every moment.

Are any of your characters reflective of you? Sure. There will always be characters who reflect my value system, experiences, and thought processes… or the complete lack of them. Writers live with their characters yapping back and forth in our minds. A character created in the cauldron inside our heads can’t very well emerge, even as a villain, without some part of us lingering inside them.


What do you like to do when you're not writing? Anything physical including chores, sports, or just walking. That is not to say I don’t read and watch TV, but being out actually interacting is where a writer finds inspiration.


Who is your favorite book heroine? Red Sonja in Robert E Howard’s Conan series. Any Conan adventure that had Red Sonja in it was always my favorite. She was a mercenary like Conan. Her rough and abusive past made her a match for anyone, but she had a soft spot for Conan. Their interactions were the highlight of any scene in Howard’s Conan writings.


Do you have any unusual habits that revolve around writing? I’ve always believed being superstitious about writing leads to a block, so I stay away from any habits, patterns, or rituals involving my writing.


What is your favorite mystical creature? The Djinn without doubt is my favorite. They make terrific villains, and even better sidekicks. I have another new novel to be released titled LAYLA where I finally incorporated a Djinn in my writing.

What were some of your biggest challenges at the beginning of your career? Finding time to write while raising kids, running a business, and paying mortgages. I never let the publishing aspect get to me. I just kept writing books. I realized my becoming a famous writer probably rivaled winning the lottery in odds. Hopes and dreams are the best, but a writer shouldn’t miss out on life obsessing over whether they’ll hit the NY Times Bestseller List.


How do you feel about reader comments? Comments from readers are an incredible resource for finding out if you related your story entertainingly. It doesn’t matter if they’re negative comments about content if you kept their interest throughout. There’s no way in hell a writer can please everyone, but we can pursue a goal to entertain. We can’t find out if we’re entertaining without comments.

Do you have any advice for new authors? Write what you’re passionate about. Don’t let anyone else dictate what you should be writing. Every writer must be an editor, and a good one. Think hard before trying to write by committee. It’s not for everyone. Criticism involving the nuts and bolts of writing such as genre length, point of view, editing, and whether or not your plot actually makes sense are all fair game, but don’t get bogged down wondering what you’ll need to do to get an agent or a publishing contract. It took nearly three years to get my novel COLD BLOODED released through Wild Child Publishing. Whether you’re querying or waiting for replies, keep writing.


What can we expect from you in the future? I have four completed novels soon to be released through my marketing partner RJ Parker Publishing for Amazon Kindle through the rest of this year: THE PROTECTORS, LAYLA, and the first two parts of a YA/Paranormal trilogy –DEMON, and DEMON INC. I’m currently working on the third part of the YA/Paranormal trilogy while editing the second part.


Where can we reach you and become informed of updates? The easiest way is through my blog where I have all of my books listed with links at http://www.bernardsblog.blogspot.com/
My book list is always updated on my Amazon page too at http://www.amazon.com/-/e/B005UNXZ04
My e-mail address is bernarddeleo@att.net 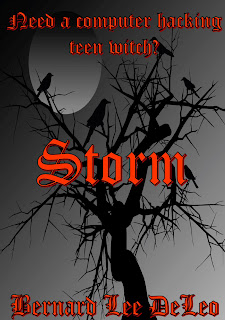 FBI blackmailed Storm Crandall; but only after Storm hacked their database. At sixteen, she’s under cover at a high school, looking for clues involving five missing girls. Besides computer skills, Storm has game in the magic department. A sect of the soon finds out power comes in many guises.
With two FBI agents posing as her parents in the city of , , Storm finds love, allies, and tragedy in her hunt for answers. By fulfilling her end of the bargain, Storm can buy her way out of spending the days until her eighteenth birthday in a juvenile detention facility.
Storm’s FBI handlers discover their young charge can do more than type fast. Their first encounter with the creature behind the disappearances shows the agents they need Storm for far more than information gathering as a high school spy.
Teaming up with an enigmatic young man attending classes with her, Storm begins unraveling a horror no one anticipated. When the case morphs from serial kidnapping into a supernatural witch hunt, Storm and her friends, under the guidance of the FBI agents, scramble to stay alive while tracking down monsters, both human and inhuman. '

So would you like to win a copy of your own?  Just fill out the rafflecopter!!!
a Rafflecopter giveaway

I just finished Open Minds today and it was great. I cannot wait to start book two :)

It's a coin toss between two really! Kelley Armstrong's Darkest powers series and Jana Oliver's Demon Trappers series! Both The close Calling and Forgiven released close together and both being so good it's hard to choose between them!

Only 1?! Ummm...it's between Twilight by Stephenie Meyer, The Hunger Games by Suzanne Collins, and Significance by Shelly Crane. But I'm looking forward to checking out a bunch over the next couple months. Storm by Brigid Kemmerer, The Summoning by Kelley Armstrong, Anew by Chelsea Fine...the list goes on!

I have to say it would be the Twilight series by Stephenie Meyer.

My 2 faves that I've read this year are Wither by Lauren DeStefano (Fever is not quite as good) and A Million Suns by Beth Revis (better than Across the Universe).

My fav YA at the moment is Charade by Cambria Hebert.

just finished the vicious deep and i loved it!