Review: Ash: Return of the Beast By: Gary Val Tenuta 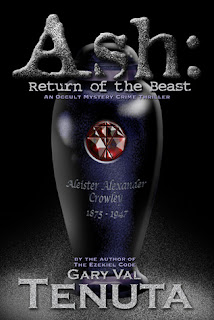 Ash: Return of the Beast is an occult crime thriller, a work of fiction based on a little known factoid about the death of Aleister Crowley (1875-1947), the notorious occultist the British press once called "The Wickedest Man In The World". Crowley’s body was cremated but the whereabouts of his funerary ashes has remained a mystery… until now.

This diabolical tale carries the reader through a series of the most curious (and sometimes unsettling) events spanning the years from 1947(and the death of Aleister Crowley) to the 1990s and the coming-of-age (and eventual stardom) of a "death-metal" rocker named Rodney Duckworth.

The time-line shifts to the present day where Brian Kane, a gruff and gritty, street-worn Seattle Police Detective, reluctantly teams up with the mysterious Rowena Ravenwood, an attractive female FBI agent. Their task is to figure out why good, healthy, God-fearing preachers in their fair city are suddenly dropping dead.

What is the meaning of the strange symbols branded onto the bodies of these hapless victims? Are they all part of some bizarre cult? No eyewitnesses. No fingerprints. Is it really murder? Where’s the evidence? And what is the disturbing secret that Detective Kane is holding so close to his chest?

The investigation catapults Kane and Ravenwood headlong into life-threatening situations as they wind their way through the strange, dark labyrinth of the world of the occult and find themselves battling the powerful forces of ritual magick.

Wow...Dan Brown fans watch out!  This book dips into the darker side of fanaticism, with twists and turns that still have me mind-boggled.  Did I enjoy this book?  I truly believe that would be a gross understatement.  It's gripping, tantalizing, and unbelievable well written.

Kane is your average run of the mill totally left-brained person with a secret.  He knows personally that God doesn't answer your prayers.  He has a pretty normal life, with a normal crime rate, with your typically normal criminals.  Then a murder spree begins.  At first, they seem like random killings until a pattern begins to emerge.  Things don't add up and an FBI agent is suddenly assigned to the case, from a branch he not only never heard of but can't pronounce.  To make matters worse, Ravenwood is educated in things he never knew existed and she is sexy as hell.

Ravenwood is definitely not all that she seems and goes out of her way to not try and push her ideas and theories on Kane.  She is just not sure he can handle it.  Time just isn't on their side in this endeavor.  They need to discover the motives of this killer and fast.  Because if what Ravenwood suspects is going on, she is literally going to have to save the world.

I truly can't say enough good things about this book.  It was action packed, well explained, and even someone who knew nothing about Aleister Crowley would be able to follow the book right along.  I was hooked by the end of the first chapter and literally unwilling to put it down!  This is my first tangle with this author, but I assure you that it won't be my last!  Excellent Reading!!

This is why I love your blog! I get to read reviews about books I've never heard of and enter for a chance to win some of these awesome books. Just since I started following you, I have marked several books on Goodreads as ones to read, including Ash. This is a book right up my alley. :)

Wow once Again You Amaze Me Thanks For This Great New Book For Me To Cheak Out.

Nikki! Just wanted to leave a quick note to say THANK YOU for the dazzling review. 5 spiders! I'm both humbled and honored. Thanks again. :-)

Thank you for sharing your review Nikki. I was not going to stop by today, but I am so glad I did. I think Ash: Return of the Beast sounds awesome. I also really enjoyed the post by Gary. Looking forward to the read.

Thanks for the review! I am going to check it out! I LOVE stepping out of my usual genres.