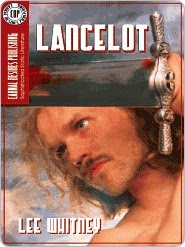 King Arthur dies in Lancelot's arms at Camlann, and Camelot dies with him. Lancelot takes Arthur's body to Glastonbury, where the mortally ill Guinevere sees her King once more, before joining him in death. Lancelot is attacked by Meleagaunce, who wants Excalibur. Having allowed the Black Knight to wield Excalibur against him in single combat, Lancelot kills him. Lancelot fulfils his promise to Arthur: he takes Excalibur to the lake. Vivian, the Lady of the Lake, comes to Lancelot in the night. She restores his memories of the time when she forged him into the most powerful warrior ever to fight under heaven's direction, and then became his lover. Vivian now explains that because he resisted Excalibur's curse, Heaven has ordered him to remain on earth until a time far in the future, when he will guide another Arthur as a leader, in a new land across the ocean. Granted invulnerability and eternal youth, Lancelot plies the only trade he knows: war. Having retired from and then rejoined the U. S. Marine Corps many times, under the family name of James Lancelot Benwick, Lancelot retires once again to his house in Piedmont, California. When an eighteen-year-old girl phones him from the Oakland bus terminal to say that her name is Vivian Camlann, and she has been dreaming of him, Lancelot knows that the gathering of the principals of the legend has begun once again. Vivian, in this age, proves to be an irreverent, street-wise, sultry temptress. In the days following her coming to live in Lancelot's house, Merlin appears in Vivian's dreams. He promises to restore her memories, and reveals that Arthur is with him. Now a nattily dressed businessman, Merlin meets Lancelot and Vivian.With but a touch of the old mage's hand, Vivian bitterly remembers that she gave up heaven to return to Lancelot's side. For his part, Lancelot tells Merlin and Vivian that he refuses to be used, this time around. When they pick up eight-year-old Arthur at school, Arthur lets his companions know what he thinks of the legend: "I have a genius IQ, and now I'm teamed up with an Alzheimer's patient, a troll, and a beat-up hooker: all of whom screwed me a thousand years ago. Cut me some slack!" Lancelot and Vivian, in their modern personas, become lovers once again. They engage in passionate, highly erotic sexual exchanges rendered even more memorable by the fact that they can sense each other's thoughts. Aided by a vampire named Serge Balkovitch, Lancelot fights the supernatural horde assembled by a reborn Meleagaunce and Morgause, who are now known as Mallor and Madeline Blackstone. Lancelot learns that because he long ago allowed Mallor to hold the Sword of Kings in battle, he catapulted Mallor into the legend's first position. Mallor now possesses Excalibur. Refusing Merlin's plea to honor the legend, Lancelot begins to dismantle it, starting by encompassing the death of Modred: Mallor and Madeline's re-born son. In this rearrangement, Lancelot is allied with Merlin, Vivian and Arthur. Lancelot learns that a vampire offspring of Lilith, a supernatural being named Dunkan, used Mallor's operation to assemble an army of vampires and shape-shifters. Dunkan plans to bring chaos upon the world. This archenemy of humankind seeks Excalibur. Inadvertently, Dunkan unites the Arthurian legend's players--both friends and foes--against his own self. A final climactic battle between Dunkan and Lancelot rewrites the legend for all time.

Have you ever wondered what exactly happened after the death of Author?  All the legends seem to die even though there were a few knights left after the great king died.  I love recreations of not only of that era, but around that time period.  Lancelot is deemed in most literature as the most vile of betrayers, another Judas so to speak.  But what if it really wasn't Lancelot's fault?  What if he was set up to betray Author so the future of Camelot was spurred into motion?  This book explores that avenue with quite a few paranormal anomalies thrown in the mix.

Our story begins with the ending of Camelot's reign and the beginning of Lancelot's solo career.  He is given insight into his new mission and given back the memories that were stolen from him prior to his meeting of Author.  He is given immortality and is told by Vivian to await her coming back to help guide him on the next incarnation of Author.  So he awaits for centuries, learning all he can about war-fare, strategy, and languages.  His mind was enhanced so he retains all of his knowledge throughout the centuries until he comes to our time.  He receives a phone call from a young girl named Vivian and realizes his recognizing is upon him.

So the whole crew (evil villains and heroes) have reunited to create another legend.  Only this time things have changed.  Lancelot is threw playing by their rules and he begins recreating a new future for Author.  This one will turn out the right way with no interference in his friend's love life.  So as all the players become known, a new evil latches on to the game.  Can this group of mis-matched heroes come together and save the day?

I really enjoyed this fresh take on the old legend, with a new one being created in the process.  I admit, this one works so much better!!  Even if its sprinkled with vampires, weres, and demons!!  The original had wizards and witches so bringing in more paranormals isn't so far fetched!!  It has some really hot sex scenes and couple of places made me tear up.  I truly enjoyed this book!!

I have always loved the stories surrounding King Arthur and his knights. I will certainly check out this book.

I liked it too. Lots of action!

By the way, this author also writes under the name Bernard Lee DeLeo or Bernard L DeLeo. Those books are action packed, although not typically with the same amount of erotica elements.

Thanks for the wonderful review, Nikki. I'm glad you liked LANCELOT. Your perception of all the elements I'd hoped would be entertaining when writing it is much appreciated.

Charles, thank you for your kind words.

I love tales and legends about the Knights of the Round Table and Lancelot.
Great cover too.
Setting the legend of Lancelot centuries later sounds like a really cool twist on the original legends.

I've always loved stories about King Author sounds like a great new twist to the story add to my wish list.

this sounds interesting. im not really a big fan of lancelot or any of this history. its hard for me to focus. but who knows! might night have found the right story yet! :D

This sounds very intriguing and I will definitely check it out. I have wondered what would happen after Arthur's death, but this never crossed my mind and I'm always game for something new and different.