Giveaway and Interview with Misa Buckley and her book Eleanor's Heart 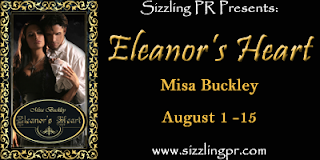 Hello and welcome to this stop on Misa's tour of Eleanor's Heart!!  I was able to pick at the brain behind the book and this is what she had to say:

How old were you when you first realized you wanted to write?
Um… 34. I was a late bloomer, heh.


Most authors have an unusual story or way that they come up with their ideas for books…Do you have one?
My ideas have come from other books, song lyrics, TV shows and even random interviews. They usually come when I’m not looking or even thinking about writing.


What was your biggest influence that steered you towards writing?
I started writing fanfic, after being drawn into that universe, then expanded to original for NaNoWriMo and that was that.


I have to ask, what are the hardest scenes for you to write?
I hate dealing with death scenes. Endings are also difficult, because they have to fulfill readers’ expectations.


Are sex scenes difficult for you to word?
Absolutely not! I love writing sex scenes *grins*


Do you see yourself writing in another genre?
I usually write sci fi, so paranormal is a new genre for me but I really enjoyed it. I love anything that’s “off the beaten path” as it were.

Has your family been supportive?
My husband doesn’t mind me writing, but he’s not a big reader so he doesn’t really “get it”. I do get the “oh, so like Harry Potter/Hunger Games/50 Shades of Grey” kind of comments. I try not to roll my eyes too much.

Are any of your characters reflective of you?
I have two female characters that are geeks, but other than that I don’t purposefully put myself into my characters. Though as the author, I’m sure I do to some degree.

What do you like to do when you're not writing?
I love knitting, making shawls and soft toys. I’m also a member of a local Steampunk group, that does meets in Victorian-style dress.

Who is your favorite book heroine?
Elizabeth Bennett, from Pride and Prejudice.


Do you have any unusual habits that revolve around writing?
Not really. I just check email and Twitter before settling down to write.

What is you favorite mystical creature?
Dragons! I have a collection of them.

What were some of your biggest challenges at the beginning of your career?
Finishing a story. I need a deadline to make me focus (and not play on Facebook)

How do you feel about reader comments?
I’ve not had many reader comments, to be honest. I’ve had negative reviews, though. They hurt, but you have to be grown up and recognize that not everyone is going to love everything you write.

Do you have any advice for new authors?
Never give up, never surrender. Be brave – stubborn even – and keep on pushing. But also listen to other authors and advice. Join a good forum such as Absolute Write and read, read, read.

Where are your books available?
ELEANOR’S HEART is available from Champagne Books, Amazon and AllRomance


Where can we reach you and become informed of updates? My website is misabuckley.com and I’m on Twitter under @MisaBuckley 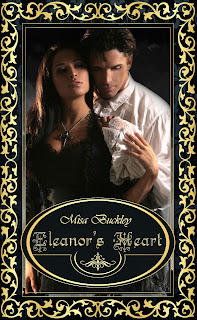 Dying of a rare blood disease, Eleanor Franklin needs laudanum to ease the pain, often driven to steal in order to buy more. But when she steals a ruby she has no idea that the gem will tip her into the midst of a deadly species war.

Saved by Jefferson Park, she discovers a man with an even darker past than her own—he is one of the last true Vampires fighting to stop the eradication of his kind.

But the Sanguine aren't the only problem as Eleanor finds herself falling in love with Jefferson. It is a relationship she cannot commit to, as she knows her time is limited, and she will not risk breaking his heart.

Misa has offered up a copy of one of her books t one lucky commenter!!  Just fill out the Rafflecopter for your chance to win!!  Good Luck!!
a Rafflecopter giveaway

Dressing in Victorian clothing at Steampunk meetings sounds like so much fun. I would love to read your book!

Hmmm...Jensen Ackles or from a book Bones.

Your books sound great! Victorian times...right up my alley

Heck if I can pick anyone and my husband doesn't mind can I have Johnny Depp :O) Carin
mawmom(at)gmail(dot)com

Cant wait to read this book it sounds great.Have an awesome weekend

My heart already belongs to many book characters LOL. The good thing is I can never love too many.

I´m happy with the one i´ve got, =) my hubby´s. I don´t mind looking at eyecandy or reading about alpha males, though =D

Definitely will keep the one I have, he is a very wonderful man ;)

I already have the heart of the man I want. We've been together for 9 years now.

Ummm safest answer would be my Hubby's, Couldn't possibly choose from one of the many, many fantasy men from my books

Someone who will be the love of my life. Hopefully he shows up soon though.

For fun i would pick malcolm Slane from Kresley Coles series

I'm happy to fall in love with the hero of every book I read!

I, too, want the hero of a good book!! Only in books are they really wonderful!

Oh, tough choice. If you asked me everyday, my answer would be different. I always seem to fall for the heros in books. :D
shadowluvs2read(at)gmail(dot)com

I of course want my hub's heart, but next in line is the almighty book gene, he will of course shower me with books and cater to my every need; I can see the steaming cuppa and chocolate on the end-table next to the recliner now (okay, okay, this is my fantasy here sheeesh) Thank you for sharing with us today :)

I already have the heart of the man I love most. The only man I could ever want. We've been together almost 8 years.