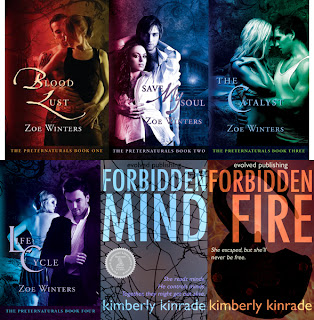 I love nothing better than to start the week off with a great giveaway!!!  And this one totally rocks it.  But I'll let Zoe and Kim explain!  Just be sure to leave a comment!!!  Take it away ladies:
Summer is heating up, and we're making it even hotter with a sizzling summer promotion you won't want to miss.

Win a Kindle Fire and six signed paperback books from authors Zoe Winters and Kimberly Kinrade, and get ready to enjoy some sexy hot reads while having fun in the sun.

From August 5-18th, Winters and Kinrade are giving away two sets of each of their paranormal romance series (all signed) to two lucky winners. The Grand Prize winner will also receive a Gift Certificate for Amazon.com to cover the cost of a Kindle Fire (but we won't tell if you just want to buy $200 worth of books instead!)

Join us in celebrating the launch of the newest in Zoe Winters's Preternatural Series, Life Cycle (how much do we love love love Tamara and Cain? So freaking much!) which now includes one novella compilation and three novels. If hot & steamy paranormal romance is your thing, then you'll fall in love with all the hunks in this series, whether they be demons, vampires, werewolves or mages… they're all so deliciously bad they're good!

Life Cycle is book 4 in the Preternaturals series. However, new readers can read this installment first with no problems. Most of the books work as stand alones, and each book focuses on a different couple. The main theme of the Preternaturals is: “Everybody is the hero of their own story.” Some characters start out villains and become heroes. Some are heroes and turn into villains. Some are heroes to some characters and villains to others.

The series world has multiple dimensions, heaven, hell (which is earth), demon dimensions, and others. Magic, reincarnation, witches, vampires, demons, werecreatures of all sorts (called therians), gods, and angels all play an important role in the Pretverse.

It’s a world where blood is magic, authority is questioned, and soul mates always find each other, no matter how many incarnations it takes.

The Preternaturals contains a blend of snarky humor and angst that fans of the series have come to expect and enjoy.

As an extra bonus for this exciting launch, get signed copies of Kimberly Kinrade's award winning Forbidden Series—a YA paranormal romance/thriller.

"...a thrilling, dark and deeply romantic read that had me sitting on the edge of my seat and eagerly awaiting the next installment." - Refracted Light Young Adult Book Reviews

While light on sex (it is Young Adult after all) it's packed full of romance and a fast-paced thrilling adventure. Think X-Men meets Dollhouse if Professor X has been an evil human trafficking geneticist.

Paranormal teens with unimaginable powers. An evil organization with deep secrets. When Sam, a girl who reads minds, meets a boy who controls minds, she discovers her future isn’t what she thought.
Together they must escape and free the others… or risk losing everything–and everyone–they love.

Zoe Winters writes quirky and sometimes dark paranormal romance. Her favorite colors are rainbow and clear.
To receive updates on new releases from the author, send an email to: zoewintersbooks AT gmail DOT com with "Subscribe" in the subject line. Newsletters go out only when there is an actual new release or a big contest. Your inbox will not be cluttered, newsletters won't go out more frequently than once a month, and you may unsubscribe at any time.
You can visit the author at: http://www.zoewintersbooks.com
Be sure also to visit http://www.theriantype.com for some fun supplemental material.

Kimberly Kinrade was born with ink in her veins and magic in her heart. She writes all things paranormal and fantasy, including award-winning young adult and children's books.

Visit her at http://KimberlyKInrade.com
Also visit http://IPIAcademy.com to participate in a fun fan-based site with swag and info on all things paranormal. You even get to be a secret agent!

Truly amazing giveaway :) Thanks so much!

Wow, what an awesome giveaway.

Thanks so much for this opportunity.

Awesome giveaway!! Thank you for the opportunity/chance to win.