Cover Reveal with some Naughty Bites!!

I have some scrumptious reads available now by Suz deMello!!!  Let's take a look: 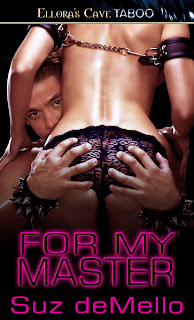 Agent Kathie Belmont has long lusted after her boss, Ross Guerrero, but has never plucked up the courage to even flirt with him. Could he be the strong but tender Master she craves?


Ross wants Kathie in his life—on her knees. But the constraints of their jobs with an ultra-secret US security agency have come between them.


For My Master by Suz deMello


Excerpt from Chapter One


Station chief Ross Guerrero tapped a pencil on his blotter and scrutinized Kathie Belmont, seated on a straight-backed chair on the other side of his wide, government-issue desk. A soft-faced young woman, she had the healthy good looks of a college student or a California beach cutie, common here in San Diego. Her mink-brown hair with tasteful gold highlights was blunt cut at her chin, masking a strong jaw line. Wide, long-lashed eyes regarded Ross with openness and candor.


With multiple piercings in each ear and a silver toe ring peeping from her sandal, she looked like any girl attending San Diego State, UCSD or even Chula Vista High. In reality, Belmont was twenty-nine years old, had graduated with honors in criminal justice from Pepperdine, then gone on to a short but successful career as a police officer in Los Angeles. She’d joined the US Security Agency, performing well during training and in her first assignments. Now he’d find out if she was ready for more demanding tasks.


Her appearance was as useful as her black belt and her Glock. Living proof of the maxim “you can’t judge a book by its cover,” Agent Belmont, who’d been orphaned as a teen, had capably cared for her two younger siblings, fighting to keep her family together. She was as competent an operative as any he’d encountered during his thirteen years with the agency.


“Here’s the situation.” Ross set his china espresso cup into its saucer with a click. “There’s a group of baddies selling drugs just over the border. Mostly steroids, but some crystal, crack, horse … you name it, they’ve got it. Because they’re in Mexico, the usual law enforcement agencies can’t go in.”


Her hazel eyes gleamed. “But we can.”


She shrugged tanned shoulders, revealed by her sleeveless pink blouse. “Isn’t there always?”


Her brows lifted. “They still exist in the age of AIDS?”


“They do. This one is in a chi-chi area called the Zona Rio, on the south side of the Tijuana River.” He paused, tapping the pencil on the blotter. “I can’t go in without a woman.”


She cleared her throat. “Exactly what would this mission entail, sir?” Her voice was crisp and professional.


Even so, Ross noted the signs of nervous excitement. A slight sheen of perspiration between her breasts, where their tops were displayed by the scooped neck of her shirt. She fiddled with her hair and didn’t meet his eyes. She crossed her suntanned knees, exposed by a blue denim mini-skirt, then recrossed them, giving him a brief glimpse of pink panties. His pulse jumped. Had she intended to flash him?


He cleared his throat. “They won’t know you understand Spanish," he continued. "You’d listen as well as watch my back. This is a group of evil bastards with absolutely no morals. They’re even selling to steroids to minors, school kids with a dream of getting out of the slums as athletes.”


“Your life could depend upon unswerving obedience to protocol. Truthfully, Belmont, I’m not sure you can do it.”


“The second in command is a, uh, rather unusual woman. A Dominant in a country of submissive females. To impress her, I’d accompany you as your submissive. Your…slave.”


He wagged a finger at her. “Language, young lady.”


“Pardon me, sir.” She shut her mouth with an audible snap, then said, “Is this plan sanctioned by HQ?”


He evaded, saying, “You know that they give me considerable latitude.”


Her eyes narrowed. “In other words, no, but you think you can get away with it.”


“Why me?” Her intelligent gaze shone from a face vivid with curiosity.


“You’re smart and tough. You’re used to giving orders, the way you did to keep your family together.”


Her chuckle was rueful. “Confidentially, sir, you have no idea how much that took out of me.”


He shrugged. “The USSA is demanding. And this mission will take a lot out of both of us. Do you think this would be easy for me?”


“I don’t know.” Her gaze stroked him again, still brimful of curiosity, though now the curiosity was tinctured with something else. Something more.


Sexual curiosity. She wanted to know what he was really like, at a very basic level.


“Would it be easy for you to be…submissive?” she asked. “Is that who you truly are?”


She bit her lip, her eyes dropping. Her whisper was incoherent.


“Speak up,” he said. “If you’re going to run this, run me, you have to state your orders and commands clearly.”


She raised her chin, and her eyes sparkled. Were those tears?


She drew a shaky breath. “You know I’d do anything for y...the agency.”


Had she been about to say, “I’d do anything for you?” Desire tightened his balls.


“But I don’t know if I can be something I’m not,” she went on. “I can manage situations, yes, and run any mission you choose. But acting like a sexual dominant…” She shook her head. “That’s not me. I’m afraid I’d blow our cover and get us both killed.”


He hesitated. The only other option involved possible abuse of his authority, but the mission was paramount. On the other hand—


“W-what about reversing our roles?” She broke into his thoughts.


Had she read his mind?


A long pause ensued while he wondered if he’d fallen into his favorite fantasy. Finally, he managed to speak.


“That could work.” He walked around the barrier of his desk and knelt next to her chair. His face was now level with hers, his gaze fixed on her eyes, her wide, nervous, expectant eyes. He read fear there, as well as blatant feminine curiosity.


He’d have her exactly the way he wanted, but he’d have to take care. A single wrong move, and she’d bolt.


Ross leaned closer, inhaling her cologne, a fresh, bright scent he didn’t recognize but suited her perfectly. He let his lips brush her neck, and watched the tiny hairs shift in subtle response. “I could do that, but can you? Can you give me unswerving obedience?” he murmured into her ear before nipping the lobe.


She turned her head to shoot him a steady look from those compelling hazel eyes. This time, their gazes met and clashed. Her eyes were bold, unflinching, utterly unafraid. That surprised him, but Belmont often surprised him. It was hard to remember that her naïve façade hid a smart, savvy agent.


He’d respected her competence and admired her beauty. Now he’d enjoy bending her to his will.


Here’s where you can buy the book and read the rest. 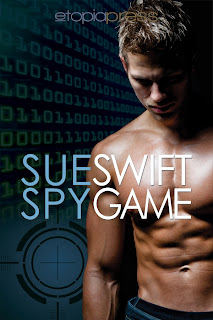 Fledgling agent Ani Sharif has finally been assigned to her first undercover mission—to seduce software tycoon Richard Rexford, known as the fearsome T-Rex of Silicon Valley. He's suspected of selling software secrets to the Chinese. Ani must succeed at her first assignment, but will handsome, clever Richard uncover her secrets and seize her heart?


On Saturday afternoon, Gar saw an umbrella hung in the signal tree in Golden Gate Park, so he met his contact in the Castro at midnight. To anyone watching, they’d look like two guys outside a crowded bar, sharing a smoke, but his contact passed Gar a tiny package, a package worth millions to his customers in Indonesia.


He tucked the package inside his jacket and mounted his motorcycle, heading for Potrero Hill and the shelter of a safe house. As he passed through a residential area, he slowed, and only then did he hear the growl of another motorcycle on his tail. At first he thought it was happenstance, but as he turned one corner and then the next, with the following motorcycle’s roar ringing and banging in his ears, he realized he’d been tagged.


Gar tried every trick he knew to shake the tail, but nothing worked. Too late, he saw that he’d been herded toward the shore of the bay, heading too fast down a dead-end alley, with warehouses on each side and a chained metal gate in front of him.


Braking too hard, he jerked the bike into a sharp turn in front of the ten-foot-high gate. The bike slewed on the slick, damp street, drawing a screeching curve to the left before crashing into the cyclone fence.


He hit hard and went down, his bike clattering on its side, sliding out of the fog lamp’s amber halo into the dark, misty night.


In a haze of pain, he lay stunned on the pavement, moving in and out of consciousness, with the bitterness of failure flooding his mouth.


The other motorcycle stopped. Gar heard the scrape of boots on asphalt. Blinking, he raised his heavy head a fraction to see an hourglass figure silhouetted against the golden light. He groaned and dropped his head back. One hand scrabbled toward the precious parcel, seeking to protect it.


The boots stopped close to his head. Too close, but nothing he could do about it. Too weak. Too much pain. Should have worn a helmet…


Motorcycle leathers creaked. He smelled jasmine, felt warmth, sensed she knelt beside him. He blinked again.


She had a jaunty smile and eyes that gleamed green even in the dim light. Opening his jacket, she removed the package, which contained the prototype of the computerized brain that would run some of the United States’ newest, most sophisticated guided missiles.


“Thank you.” She tucked the package into her jacket and walked away, her boots crunching. He heard her bike kick, catch, and roar away, its growl receding into the misty night.