I adore this series, and the first 2 books have come together as one and gone to print!! 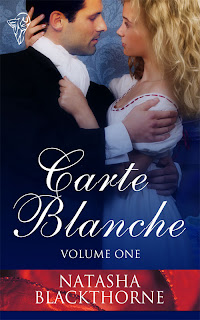 By reading any further, you are stating that you are 18 years of age, or over.
If you are under the age of 18, it is necessary to exit this site.
Copyright © Natasha Blackthorne, 2012
All Rights Reserved, Total-E-Ntwined Limited, T/A Total-E-Bound.

Philadelphia, PA Spring, 1812 Grey couldn’t keep his eyes off her. Philadelphian women were the cream of the Republic, but damn if this one didn’t exceed all previous definitions. Curling wisps of hair escaped from her indigo bonnet and trailed down her graceful neck. He’d never seen hair that colour—like champagne shimmering in the moonlight. She looked up, giving him his first full sight of her face. Sky blue eyes, full of aching, longing…and something else. Abject sadness. Haunting. Something caught in his chest. Something reminiscent of pleurisy. Well, it wasn’t surprising. Philadelphia air was notoriously insalubrious and the day was oppressively damp. He blinked, glancing away. Was he losing his wits? Haunting eyes? What romantic nonsense. If he didn’t know better, he’d think he was getting a fever.

To celebrate the release of the print version, Natasha has generously offered up a copy of Grey's Lady. Let's take a look: 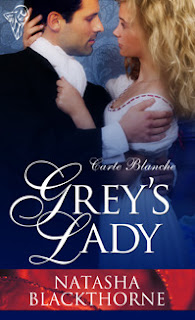 Grey's Lady Blurb: Seeking sexual excitement and conquest, poor but beautiful Beth seduces wealthy merchant prince Grey Sexton, only to find herself the pursued as he seeks to own her body and soul.

Flouting the moral standards of Jeffersonian America, temptress Beth McConnell lets no man touch her heart. Her motto is love them once and leave them burning.

But Beth will only surrender her love to a man she can trust. And Grey's materialistic approach to relationships leaves her little reason to believe he can ever give her what she truly needs.

For these two cynical yet lonely people, can deep sexual intimacy work a miracle and lead to the opening of their hearts?

Hi!
I'm hot and bothered just reading the excerpt. The book must be explosive.

Hi, Thank you for the steamy giveaway! lol Sounds great!

Hi. I've really been wanting to read this series! Thank you for the great giveaway!

loved the excerpt. sounds really exciting thanks for the giveaway

Hi, this sounds like a really awesome read. Thanks for the giveaway.

What a delicious and decadent excerpt. It's really whetted my appetite. I'd love to read this.

I have wanted to read one of Natasha's books for so long now. I sure hope I win!

Hi!!
I like the excerpt and wanna read more. The book sounds awasome, and i am looking forward to reading this book. Thanks for chance to win this :)

Really enjoying this series, Natasha. Thanks for sharing your talent with us.

I have never read anything by Natasha but I keep hearing more and more about her (all good:) ) and want to see for myself!

Hi nikki and natasha! Love the excerpt, and i 'm gonna put this on my tbr pile :)

Grey's Lady has been on my tbr forever!!! Really gotta get this now!!!!
andieleah78@gmail.com

I loved Waltz of Seduction, and I can't wait to read this one! Thanks for the giveaway!

Natasha I love your work! Looking forward to reading this :O) Carin

Hi, I really have been wanting to start this series so thanks for the giveaway.

WTG on your writing skills.
sounds like my kind of book

I can not wait to read this series. It's on my list but hubby has shut me off for the summer on books.