Review: Fathoms of Forgiveness By: 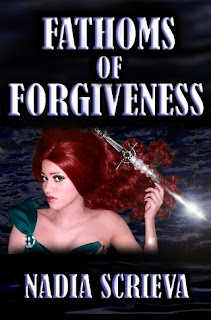 There is no divorce in the undersea kingdom of Adlivun. Marriage is a bond that lasts until death—even if death comes in several centuries, and in that time your spouse happens to become your sworn enemy. This is the conflict that General Visola Ramaris faces when she learns that the mighty Vachlan is behind the attacks on her kingdom. She has sworn to protect Adlivun with her life, but long ago, she also swore to love and honor her husband... Visola must choose whether she will destroy Vachlan once and for all, or attempt the hardest thing conceivable: communication. After two hundred years of desertion, she has no faith in their feeble bond and knows she can never forgive him. When he threatens the person dearest to her, she must take action. Confronting Vachlan on enemy territory would be nothing short of suicide. She knows that if she falls into his custody, the deranged man would relish breaking her down and making her lose her own sanity. Princess Aazuria forbids Visola from taking matters into her own hands. She will do anything it takes to protect her friend from the man who wants to crush her. Alas, Visola is a crazy, uncontrollable warrior woman with the blood of Vikings in her veins. Why would she ever consider doing the safe and predictable thing?

Let me start off by saying ..wow.  If there were ever poster children for dysfunctional relationships, it would have to be Vio and Vachlan.  It was a truly interesting read that definitely sucked you in.  There is so much going on and so many different emotions being played out.  Its startling obvious that Vio has never stopped loving her husband.  Especially after her drinking session with an old friend.  Two hundred years and she still misses him.  But has he really changed so much?  Could he really have fallen off of that rocky cliff and descended into pure madness?   He was not far from the very powerful King that once ruled them.  The evidence is quickly piling up against him and everyone wants blood.  Then the ultimate sin is committed and her twin sister is taken.  It takes all of her plotting and locking a certain princess in a cell to make the trade off.  She knows he is going to torture her and comes prepared to self-sacrifice, especially if Vachlan refuses to let her sister go.  But when all the games have been played and the torture has been laid out, who truly deserves forgiveness?  And will this change anything between them?  This book was incredibly intense and will leave you wanting more!!  Especially with the cliff hanger!!  Curses!!  LOL!!  Great Read!!