Review: Even Villains Fall in Love By: Liana Brooks 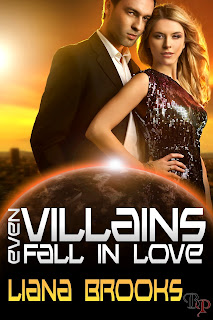 If you believe the rumors you know that Doctor Charm, the wickedly sexy super villain, retired in shame seven years ago after his last fight with the superhero Zephyr Girl. The fact that the charming Evan Smith - father of four and husband of the too-beautiful-to-be-real Tabitha - bears a resemblance to the defeated Doctor is pure coincidence. And, please, ignore the minions.

Everything is perfect in the Smith household until Tabitha announces her return to work as a superhero. Evan was hoping to keep her distracted until after he rigged the 2012 presidential election, but – genius that he is – Evan has a backup plan. In his basement lab Evan has a machine whose sole purpose is keeping Tabitha hungry for him.

But children and labs don’t mix. The machine is broken, and Tabitha storms out, claiming she no longer knows him. World domination takes a back seat to meeting his daughters’ demands to get Mommy back right now. This time his genius isn’t going to be enough – he’s going to need both his evil alter-ego and the blooming super abilities of his children to save his wife. But even his most charming self might not be enough to save their marriage.

I have always had a thing for villains :) I mean come-on they are the fun ones!! Who wants to be surrounded by a glorious do-gooder ALL the time? This story was absolutely fantastic!! It had that evil villain over-confidence humor and world’s greatest dad mixed up all together. Everything was perfect in the "retired" Dr. Charms house until his wife announced that she wanted to go back to work. Being a villain who was married to a super-hero obviously had its draw backs, but his wife had been content with her stay at home mother role up until now. And timing couldn't be worse. He had been just about to put the finishing touches on his newest development that would assure everyone of a steady source of income, and him control of the US. It was a great start! But as he becomes the daddy-sitter by day and his children start playing in the lab, well accidents do happen, and children break things. Everything seems to go wrong from there. His wife comes home in a foul mood and leaves him the next day. He begins to search for her frantically trying to figure out what has happened. And, unbelievably, stumbles upon a plot from a super-hero!

This story was so cute!! I laughed all the way through it because he really does handle things well and it is so obvious that he loves his family. There is a surprising twist at the end of the story that melts your heart. This is a MUST read!! It will delight every aspect of your being and have you wishing that it would not end! Excellent Read!!!

This sounds absolutely adorable. I like the quirky anti-hero role.

Thanks for sharing your review.

This sounds so fun! And what a great concept.