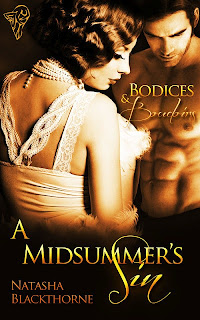 What kind of woman seduces a man into betraying his most deeply held beliefs?


A woman in love…


It was summertime and the days were long and hot, the nights even hotter. Though she was tired from her work as a bondswoman to Goody Wilson, Rosalind couldn’t sleep. She told herself it was the heat but that was a lie. The man she was in love with would soon be leaving. She might never see him again. Her heart was silently breaking. So sleep eluded her. The sound of a sudden, unexpected breeze rustling the trees outside made her get up from bed and seek the outdoors.


Thomas also could not sleep. He was walking in the woods near the property line between his farm and that of Goody Wilson. He saw Rosalind dancing in the clearing, in her shift, in the brilliant moonlight.


A MIDSUMMER’S SIN is a story of two people who are in love with each other but cannot give in to that love. Then one night the forces of nature conspire to create a powerful temptation that neither of them can resist.


Blurb:
Sometimes giving in to temptation is the best thing you can do...


Goodman Thomas Marlowe needs a wife. He loves his neighbour’s bondswoman Rosalind Abramson but for all the wrong reasons. The carnal passion he feels for her is at odds with his vision of the perfect marriage—something shaped by the memory of the pure, pious union he shared with his late wife. Valiantly, he fights to keep his feelings hidden.


Rosalind yearns for the handsome Goodman Marlowe. Yet beneath his kind action lies a cool distance that tells her he cannot forgive Rosalind’s shameful past. She’s determined to deny an infatuation with a man who will never respect her.


However, Thomas cannot focus on finding a bride while the unsuitable Rosalind is always so close and so alluring. Now he’s about to take a teaching position in another town. It’s the perfect escape for a man tormented by unacceptable desire.


Late one night, in the midst of a summer’s hot spell, Thomas spies Rosalind in the woods, clad only in her shift, dancing in the moonlight. It’s really more than a man celibate for three years can bear. Thomas is in danger of falling into a sin so powerful, it threatens to challenge everything he believes in...


By reading any further, you are stating that you are 18 years of age, or over.If you are under the age of 18, it is necessary to exit this site.


She was clad in only her shift.


Moonlight illuminated the thin cloth into a shimmering veil. The glowing ivory of her gentle, generous curves, hints of rose-pink nipples, a shadowy triangle between her long, lithesome legs—all teased Thomas’ imagination.


Blood rushed from his head to fill his cock.


Heart thundering, he leaned against the tree. He barely dared to take a steadying breath lest the vision of that girl dancing in the clearing might disappear and prove itself a mere figment of his long-starved lust.


Not since his days at Oxford had he seen a woman’s body displayed so wantonly, then only in dimly lit, rented chambers. Never in brilliant moonlight.


The wind calmed. The rustling leaves of the tall trees grew silent. Her laughter carried to him. The sound—so free, so girlish—sent pleasurable shivers through him, sensual and immediate, as if a woman had raked her nails softly down his back. His erection throbbed, getting bigger, stiffer, straining his breeches. Sweating, he grasped himself and gave his aching shaft a firm squeeze.


God. It was more than a man, a widower of over a year, could bear.


More so for Thomas. Physical passion had repulsed his wife. For his beloved Patience’s sake, after the conception of his son, he’d left her in peace. Now he’d been three years without the ease of a woman’s soft, warm body…


She was within reach.


He wanted to go her. To seize her. To crush that beguiling body against his own.


No! He released his cock and took a deep steadying breath. He’d learned how to master his passions. He was a Puritan now, no longer a libertine.


He would not yield.


He closed his eyes, but all he saw was hair burning like flames in the noon sun. He was taken back to a little over a year previously when he had been riding in a carriage on a seedy London street.


He had been with his family, on his way to board the Abigail for Boston. His son had taken ill from the stench of the docks and had forced the stopping of the vehicle. Thomas stood outside the vehicle, talking with the driver as they’d allowed the interior to air.


He looked up and saw her. Rosalind. She had worn no head covering—her curls had bounced wildly as she’d run towards him. She’d held her skirts—the most garish hue of green he’d ever beheld—high enough to display trim ankles and well-turned calves clad in pale pink silk stockings that gave her legs the appearance of being completely bare. She had lifted her knees and run like a boy. A fine sheen of sweat had sparkled on her flushed face and on the exposed tops of her generous breasts.


Thomas inhaled deeply and pinched the bridge of his nose, willing the memory away. But the image only intensified.


She had increased her pace, though it didn’t seem possible for anyone, much less a woman, to move that quickly.


She’d come upon him so fast and close, he’d thought she meant to crash into him. His man’s body, so starved for the touch of feminine flesh, had longed to feel her body colliding with his. Such desire—it had held him immobile. At the last moment, as she’d turned, bypassing him, her eyes, dark brown and large, had caught his—full of terror—he could feel it reverberate in his own bones… His heart had contracted with sympathy. A whoosh of air, scented with roses and musk, had blown over him as she’d hauled herself into the open carriage.


The carriage where his wife had waited.


The crack of a branch snapped. Drawn into the present , he opened his eyes.


She was still there.


Dancing in the moonlight.


As his neighbour’s bondswoman, Rosalind was always so close, so desirable yet so utterly uninterested in him. She was warm and friendly to others yet she dealt with him differently. She often acted aloof, slightly superior, as if he’d never done her any kindness.


But now she shared all with him, however unwittingly.


A single chance to have her without risk of discovery. There would be no consequences. He need only reach out and take. He inhaled deeply. Dear God, give him the strength to resist.

Love the excerpt! I have this one on my TBR too. :)

Thank you so much for stopping by and for the lovely compliment. :)

Thank you so much for hosting my new release on your beautiful site. :)