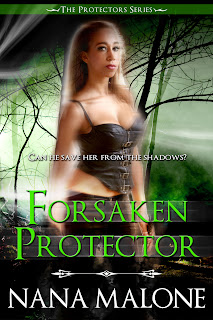 The enemy of her enemy is her friend.

Almost one year after escaping Gentech Facilities, Symone Jackson lives in the shadows with her nightmares. Thanks to horrible genetics experiments at the hand of Peter Reeser, her mere touch is lethal. It may be safer to stay in the darkness, but despite the monster she has become, she wants to be the hero…and only one man can help her.

Garrett Hunter thought he was one of the good guys, but on routine surveillance of a suspected terrorist, he discovers the awful truth…he’s not the only super human around. When Peter Reeser gave him the opportunity to beat a debilitating illness he jumped at the chance. But his decision to save the enemy—Symone Jackson—will endanger the only family he has.

The way to salvation is with Garrett’s help. Can Symone overcome her mistrust and stop living in the shadows? Or will her nightmares become reality?

I completely enjoyed reading this book.  Welcome to Nana's world of super-humans created by a mad man.  Symone Jackson was on the run.  Unable to control her powers, she has separated herself from the others like her and tried to help out at a Youth Center.  Coming from the streets herself, he empathized with these children and wanted to help.  But she could never get close to them, and she could never touch them.  She had been without any human touch since Peter had kidnapped her and experimented on her, turning into the human electric beam. Cassie, his sister, had saved her and others like her but the damage from the experiments had already been done.  After almost killing another like her, she flees from the home and strikes out on her own again.  She can never hope to have a normal relationship with any human, so she withdraws further and further into herself.  Peter has sent Trackers out looking for her and she has so far eluded all his traps.  That is until Garrett come along.

Garrett had one mission, find the terrorist, subdue her, and hand-deliver her to his boss.  But something is off on this mission.  The target doesn't seem to be at all like she is described.  Being an empath Garrett can feel that there is more to Symone than meets the eye.  And when he gets an up close glimpse, he is totally hooked.

A war has been declared between brother and sister.  Most of Peters men aren't evil, they have just been lied to and deceived.  The possiablilties of super-powers are endless, as well as the combinations.  Strong bonds seem to elicit new powers.  So their race is always changing.  This was an interesting dip into Nana's world that I quite enjoyed!!  I look forward to another addition of this series!!