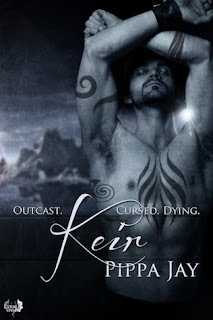 For Keirlan de Corizi--the legendary 'Blue Demon' of Adalucien--death seems the only escape from a world where his discolored skin marks him as an oddity and condemns him to life as a pariah. But salvation comes in an unexpected guise: Tarquin Secker, a young woman who can travel the stars with a wave of her hand.

But Quin has secrets of her own. She's spent eternity searching through space and time with a strange band of companions at her back. Defying her friends' counsel, Quin risks her apparent immortality to save Keir. She offers him sanctuary and a new life on her home world, Lyagnius.

When Keir mistakenly unleashes his dormant alien powers and earns instant exile from Quin's home world, will she risk everything to stand by him again?


It seems that even in books prejudice rears its ugly head.  A gentle soul greatly abused because of one small thing, he was born with blue skin.   The Blue Demon he was nicknamed.  A bearer of unimaginable horrors, yet he never hurt anyone.  He tried running to spare his mother the pain of having to look upon the very ting that drive his father mad.  His skin.  Keir was forced to live on the streets, going through garbage for food and making sure he was never seen.  It never boded well.  For the second he was exposed, someone was always there to hurt him.  The beatings and the suffering had built up over the years.  He was just tired.  Being captured was almost a relief.  At least in prison, he knew his fate was about to be over.  Until fate has a way of twisting itself.  Someone else was thrown into the cell with him.  A woman with flaming red hair that showed him kindness.  It had been so long since that had been bestowed upon him he had forgotten the feeling.  It was too bad that he had already given up hope...

Quinn was on a mission.  Somewhere on this backwards planet, the Blue Demon ran free.  She has looked everywhere for him and will not stop until she finds him!  Finding him imprisoned was a stroke of luck , even though in his condition it was unsure if he would make it.  She needed to get him home so could cure him.  This man was too special to let go.  As she fights to save him, she willingly gives up part of her mind to heal him, knowing that if it works, they will be connected forever.

Keir is taken aback that someone actual cared enough to save him.  He has been mistreated to the point where he should be consumed with bitterness and hate.  But hes not.  A gentle soul is buried underneath all of the scar tissue, even if he can't understand why he has been so hated all of his life.  This book is mainly focused on Keir and Quinn growing as they become more involved with each other.  You heart will bleed for Keir.  Several times during the book where impossible odds are conquered, and hope is finally given back to Keir.  I really enjoyed this book and look forward to reading more from this author!!  Great Read!!

Oh, this one sounds good. I've been looking for some good Sci-Fi Romance.

Thanks for sharing the review!

Thank you both for stopping by. :)