Review: Blood of the Revenant By: N.R. Allen 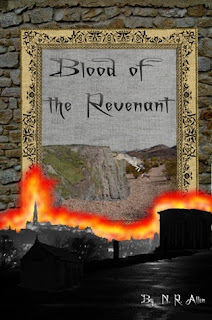 Something strange is happening in Returning City, something dangerous.

But in Returning City, everyone has secrets.

Gabriel grew up believing that he was the same as everyone else. But now, things are changing. He begins to see strange, monstrous creatures instead of the people he has always known. Struggling to protect his family, Gabriel must turn to a mysterious stranger, but is she only helping him for her own dark purposes?

In order to survive, Gabriel has to become more than he has ever been, and he will have to go against all he has ever known. Soon Gabriel will realize that something dangerous waits for him—his past—and that past holds a secret deadlier than anything he could ever imagine.

I enjoyed this dip into dark fantasy.  Gabriel grew up in a society that had a defined order.  It was always night, and the only people you could trust were those within your family.  The rest of  the beings were considered either others or priests.  They all had well defined rules.  You didn't associate with the others, the young ones lived in a different part of the city away from the Olders, and you had to fight for everything you had.  That included food, clothing, and housing.  Gabriel was the fighter in the family.  Since he always won, life for them was pretty good.  Until the day he was asked to fight another in his family.  Gabriel refused to fight him and slowly his world began to unravel.

There is an Older female that has hated him his whole life and one that tries to entice him to stay by her side.  For Gabriel it is different.  All the rest of the revenant bleed black, are afraid of water, and are distorted when faced with a reflective surface,  But Gabriel must strike out on his own to set right the wrongs of his ancestors past.  The reverant can not be allowed to roam free, especially the ones that make up his family.

This book was pretty original.  It had quite a few dark twists and turns, but it you ended up with a really good story.  I would definitely like to read another book by this author!  Great Read!!

Thank you for the review this sounds like an interesting read.

This book sounds exciting. Sounds like one you don't want to put down.
kathyross75@yahoo.com

Thanks for the introduction. This looks like a great read.

A little different from other reads... innovative, I like that!
- lavendersbluegreen(at)yahoo(dot)com

I do enjoy reading your reviews, they are to the point and not too long! And this book sounds interesting as well, I'll have to put this one on my TBR list as well.
Thanks!

Nice job. Short, sweet and to the point. I like that.

Thank you for the great review. I love a story that has that something different and it looks like Blood of the Revenant is definitely in that category.

Love you reviews and rating system. Thanks :)