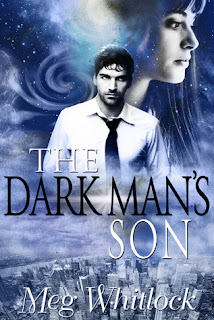 She claimed the muggers were demons, but of course Jason didn’t believe her. At first.

When a mysterious woman appears in a dirty alley to rescue Jason Latimer from a pair of muggers, he tries to write her off as a garden variety lunatic. But he can’t shake the memory of her intense green eyes that seemed to flash gold, or the glowing sword she’d worn on her hip.

She calls herself Alex (no last name) like she’d made it up on the spot, and she offers Jason her protection. From what, she can’t or won’t say. He refuses, and that night he dreams of a dark man with the same offer. His black eyes flash blood and garnet, and he smells of burning things. Jason refuses him, too.

A chance meeting brings Alex and Jason together again, and she tells him of the Guardians: two immortal beings created near the beginning of time with the express purpose of fighting for mortal-kind’s soul. She is Light, and the man from Jason’s dream is Dark. Jason must choose, because Lucifer, for reasons purely his own, has unleashed the armies of Hell to hunt Jason down.

But there are things about Jason that not even he knows, and he’ll face hard truths and bitter choices as he struggles to find his place in a world redefined. Will he rise to the challenge, or, when the time comes, will he falter?

From Renaissance Florence to the French Revolution, from World War II to the modern streets of New Orleans, The Dark Man’s Son is a riveting journey filled with unforgettable characters, wry humor, dark twists, and a touch of romance.

Now this...This was a total surprisingly absolutely amazing read!!  I will forewarn you, the ending will have you smacking your e-reader and shouting nooooo!!  It is very climatic and I was so into the book I shouted out in my frustration!!  LOL!  That is how you know you have a great read.  You have it in your lap, totally oblivious to your surroundings, enthralled by the plot buildup and then suddenly the brakes are slammed, reality comes crashing back to you as you frantically search for more of the story.  So there I was, sucking it up and realizing that I needed to share with you the awesomeness of this book.  This is perhaps one of the few times I was blown away by a book.  It was a delightfully shocking read!!

This book is a good versus evil, on the highest plane of existence.  You have your angels, your demons, and then there are the guardians.  Alex, as she is known in this life, is the Lady of Light.  The thing I absolutely loved about this book was that good and bad wasn't black and white.  Alex treads a line and lives by the rules, but good can be relative.  I liked that a lot.  It gave a different spin on the story.  But her counterpart, The Dark One was definitely evil and he enjoyed it.  But even evil has its moments of goodness, and the Dark One fell in love with a mortal.  But all of this is just background.  The real focus of the story is Jason and how he is being manipulated into taking his rightful place,

I'm a big details person and another thing I loved about the story was the fact you got to know All of the characters.  The author took you through several memories and you got insight into the characters mind and some extra background on the story.  It was an incredibly well written book and plot just keeps thickening as more players are added to the mix.  I highly recommend this story to paranormal lovers.  It really will completely immerse you!  Excellent Read!!