Review: A Gift of the Darkest Magic By: Ashlynn Monroe 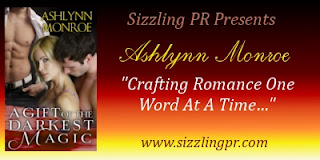 Would you be willing to betray the person you love in order to save their life?

Clarissa's husband Matt is dying of cancer. They've tried everything that medicine has to offer, both traditional and experimental, and nothing's worked. Clarissa spends her days in the hospital, watching the man she loves slip closer and closer to certain death.

When her sister tells her she knows a way to save Matt, but it involves visiting a local club run by vampires, Clarissa is outraged that her sister would believe something so insane. But then she learns the truth.

Braden, the sexy and mysterious vampire who runs the club, does indeed have the means to save Matt, but he demands a high payment in return. He doesn't want money, her blood, or even her life...he wants something she never expected. Clarissa has a choice—spend twenty-four hours in Braden's bed or let her husband die.

But what she never foresaw was how much more the vampire would truly want after he'd given her the gift of the darkest magic.

This one is definitely a switch up from the usual vampire reads.  I liked it.  If it were me?   Yes, I have to admit that I would sleep with a vampire and betray my husband to save his life.  Who wouldn't?  Clarissa is a very believable character.  You can almost feel her grief and desperation in the pages of the book.  It truly was a heart-wrenching situation.  I don't think she thought much about the after effects of her decision.  One night with that kind of yummy beast is bound to leave scars, and LOTS of  delectable memories.  Even after Matt is saved, can she truly return to her life?  Turn her back on everything she experienced?  And for that matter, will Braden allow her?  Take a dip into the darkness with this yummy short!!

Thank you so much for the wonderful review!