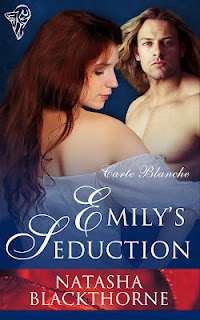 “Oh.” It was all Emily could manage to say. She dared not believe her own ears. Yet he was still working her laces loose.


He took her earlobe into his mouth and drew on it. Pure delight tingled down over her neck and made her nipples tighten even harder. He put his tongue into the centre of her ear and demonstrated an approximation there of what she wanted most. Softly thrusting in and out. God, he knew what that did to her…Fierce need stabbed down into her lower belly. She opened her mouth on a silent moan, trembling all over.


He removed his tongue. “He’d like to do a lot more however, no man is going to ever fuck you but me.”


He moved his hands to her waist and tightened. “Damned  correct, of course.”


“But you want this…for him to watch?”


“I do.” Alex breathed the words and she recognized his most passionate mood. His cock was harder than iron beneath her bottom.


Alex laughed, the sound rumbled like deep thunder through her body. “Because I know how badly he shall wish to be me and that he never know the joy of being inside your sweet body.” His whispered words sent heat and chills through her. He nipped her earlobe. “Allow this, give me this.”


Her nipples tightened into sharp, painful peaks and suddenly she wanted nothing but to feel his hands upon them. A moan trembled through her and she bit her lip to hold it back. He kissed her then and she couldn’t help opening to him. Hungrily, shamelessly.


He pulled her gown off her shoulders, sliding the velvet slowly down, his fingertips trailing after it and sending sparks of fire down her skin. Her back arched of its own accord, her breasts aching for his touch.


The straps of her petticoats dropped. His hands touched her satin chemise, hooking into the neckline, tightening.


She came aware enough to grasp his hands. “Don’t tear it!”


She hurried to shrug out of it. She hadn’t worn stays and as the cool air touched them, her nipples grew even more erect. They were painfully hard now. Heat twisted through her belly into her cunt.


He twisted her on his lap so that she partially faced Peter’s settee. She didn’t open her eyes. Yet she knew he was watching. She could sense it. There was carnal fire sparking on the air in the chamber. It intoxicated her, dizzied her. Once again, Alex was showing her sides to herself she’d never dreamed existed. How could she have dreamt it? No one did such things in books. No talked of such things.


Alex’s hand brushed over her breasts with agonizing slowness. The inner folds of her quim swelled and she couldn’t help but squirm on his leg. His hands were stroking and cupping her but somehow never managing to even so much as brush her nipples. A moan escaped her. It echoed loud and animal in the chamber.


She caught at his hands and tried to direct them but he resisted her. “Oh please, please,” she cried, no longer even remembering where they were.


“He’s watching you, my love.” Alex’s voice was warm and soft in her ear. “He wishes he were me.”


She barely comprehended his words. She was beyond caring.


“Look at him, go ahead, he will like that. Look at him now.”
Thoughtlessly, she obeyed, opening her eyes. Peter was watching, his sky blue eyes darkened and focused intent on her. It should have dismayed her but it only fuelled her desire higher. Wetness gushed forth between her legs and her inner walls began to quake. Alex’s fingertips brushed her nipples and fire raced through her body. She moaned aloud. She couldn’t stop. He turned her to face him and he lowered his head.
Look for this great work on Amazon soon!!!  To take a look at my review click Here!