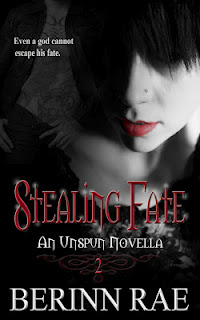 Lachesis is a Fate, an ancient goddess in whose hands our destinies are unraveled. When she’s not weaving fortune, she does what she wants when she wants. That all changes when she runs into the man she craves but prayed to never see again. And she'll soon discover the god of terror can really hold a grudge.

The most frightening of gods, Phobos is a predator who takes pleasure in terrorizing the world. After millennia of relentless searching, he finds the Fate who caused him to be cast down from Olympus. Now he plans to use every bit of his talents on the goddess to regain his lost heritage without losing his heart in the process.

This is book two in the unspun series, and yes all of this delicious delights can be read as a standalone.  The sisters seem to have their own Fate playing out in different areas, but I must admit that Lacey has been running from hers for far to long.  Ever since she had first spied Terror in the battle field, she has wanted him.  She was present at all of his battles, watching as he weaved his sword, painting a macabre portrait of death in his wake.  He was art in motion and she never tired of watching him from afar.  Until one day her caught her, never realizing just how long he already had her!

Terror didn't strike passion in women.  Most women, be them immortal or mortal, steered clear of him.  But this Fate was different and he couldn't suppress his own curiosity at the oddity.  Or his desire.  But Lacey had dealt him a cruel hand for being on the wrong side of a bloody battle.  Cast out of Olympus and stripped of his powers, Terror plotted his revenge against Lacey.  But when all is said and done, can Terror actually hurt the only women he ever loved?

This was an excellent addition to the series.  I have immensely enjoyed these little shorts and can't wait to dive into the next one.  This one was quite an unusual adventure with a dark twist.  I loved every minute of it!!  Fabulous Read!!!

Loved Berinn's Stealing Fate! So glad you did too! :)

I love this series and have been following its release dates from the start. I think it is an amazing concept and all the authors are just excellent. sdylion(at)gmail(dot)com

This series sounds like a fun read! Thank you for the give away.

I really need to pick up this series, looks really good

I've got to add this series to my wish list as well.

Sounds like an awesome book, can't wait to read it!!

Well you caught me at "dark twist" that is always a hook for me :) Thank you for sharing with us about this fun book.

This series looks great keep up the great work.

brilliant concept for a series, cant wait to read it.

Thanks for the introduction. This is so on my TBR list.

Would love to read this. Don't recall ever reading any books with the Fates being the main characters so this should be interesting.

WOW this sounds SO good and SO uniquely different! I love personifying terror and making it a man who can love and desire. I def want to read this one!