In the Spotlight: Sabrina York

The Horror of Erotica
Okay. I admit it. Much like the ditzy big-boobed bimbo in a “B” horror film, I am weak and easily led.
I say this because when asked why a writer so passionate about erotic romance wrote an erotic horror, I have to admit it.
I did it on a dare.
That’s right. I cannot resist a dare.
I was an unpublished author then, sitting in a Starbucks on a balmy summer evening with my wonderful critique partner (Mark Henry who writes hysterical Zombie memoirs). He was giving a reading from a piece his Zombie lover, Amanda Feral, had just sold to Ellora’s Cave’s Kink line.
It was definitely NOT a sweet romance. Definitely NOT what I was used to writing. Or reading. Keep in mind, I picked up my first romance novel when I was thirteen and have read little else since. I wasn’t even aware they published other kinds of books. Or maybe I wasn’t interested that they did.
Oh, don’t get me wrong. I knew about erotica. I read Ann Rice’s Sleeping Beauty series until they were dog-earred and in rumpled tatters. I’d even written a handful of my own illicit stories. Not that I knew what to do with them—or if anyone would ever publish them. They certainly didn’t have naughty books like mine on the shelves at Barnes & Noble.
But what I had failed to notice was the growing trend of e-book erotica and the wide variety of subgenres within that field.
Mark’s book surprised me.
But it opened my mind. It opened my mind to the different kinds of books I could be reading…and writing. And, for heaven’s sake, selling.
Mark is that kind of friend. He likes opening people’s minds. And as long as he doesn’t start gnawing on my brains, I’m cool with it.
Anyhoo—as we were talking about Stocking Full of Coal and the growing success of erotica in general, Mark opened his mouth and said it. Said the words I couldn’t resist.[[
“You should write an erotic horror.”
“Oh, I couldn’t,” I said. (I was terribly demure back then.)
“Really?” A light sparked in his eye. “I dare you.”
And that was all it took.
I would write it, if for no other reason, to show him.
The hardest part for me was finding a story line. Did I mention I’d only read romance? Traditional romance has very specific rules. The prime directive: Don’t kill your characters.
But in horror, the only thing that matters is scaring the crap out of your readers. Anybody could die at any time, and everyone pretty much knows it. That’s part of what makes it so frightening. There are no rules. Certainly no promise of a happily ever after.
Well, I don’t like being scared. Needless to say, I haven’t spent a lot of time daydreaming about horror.
Besides, I always deplored the ditzy big boobed blondes in horror films who wander into haunted graveyards (in heels) or stumble through cavernous mansions without turning on the lights.
Really? Seriously?
And god help them if they go skinny dipping. During Zombie season.
So I knew at once, if I wrote an erotic horror, it would not be clichéd. My heroine would be strong. Smart. Determined. Conflicted.
To ratchet up the conflict, I knew I had to give her the one thing she simply couldn’t bear. Since this was erotic horror, that had to be sex, and lots of it.
For the horror element, I had to dig deep. I had to think about what really scared me, deep down. I came up with a list of things. (Did I mention I’m a paranoid scaredy cat?) At the top of the list was: Losing control. (Yes, I am also a control freak.) Other things that creep me out are aliens and plants.  So for me, this storyline was the trifecta, the perfect storm of hot horror.
Now, most people aren’t afraid of plants unless they’ve read the Ruins, in which case they really should be. But I remembered a study I’d seen about kirlian photography—which showed how plants are aware of and react to things happening around them—and watched the BBC documentary Private Life of Plants, both of which form the foundation for my paranoia about plants and my conviction that they are secretly stalking us. Very. Slowly.
They’re quiet. They move in tiny increments. Unless we stop them, they will silently and steadily take shit over.  If you doubt this fact, take a look at just about every abandoned temple in the South American jungle. Or my backyard.
Twining with my deep-seated fear of flora is a fascination for Biology—I am especially captivated by the weird and sometimes gruesome ways species propagate. One of my favorite books is Dr. Tatiana's Sex Advice to All Creation: The Definitive Guide to the Evolutionary Biology of Sex which addresses this topic in great detail.  Many of the details are extremely creepy. If you extrapolate them to humans, you get horror, and lots of it.
With a combination of all these elements—and the steamy, explicit sex that is my hallmark—I knew I had my theme. Rising Green, on a dare, was born.
Check it out.
I dare you!
Here’s a tiny taste: 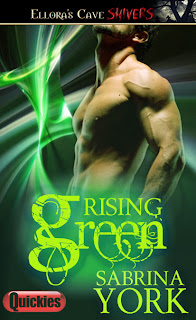 Rising Green Blurb
Chaos erupts for the members of a scientific expedition on a remote island in the Pacific when the team’s botanist, Sage Green, is impregnated with the spores of an alien plant form. She’s always been the crew’s Ice Princess, but now something’s changed. Now, something is driving her, raging through her, compelling her to screw every man on this desolate rock. Again and again and again.
What the very appreciative men don’t realize is that each illicit interaction, each hedonistic comingling, will take its toll on them as well. And no one can survive the torturous pleasure unscathed.
Reader Advisory: Forget happy endings and get ready for steamy erotic horror that will shock you even as it turns you on.
Rising Green Excerpt
Copyright © SABRINA YORK, 2012
All Rights Reserved, Ellora’s Cave Publishing, Inc.
From the middle of the thicket, a thick stalk topped with a bulbous bud rose. It was reminiscent of Pinguicula grandiflora, but instead of purple it was a blood-red hue with bright-yellow streaks.
Sage set down her rucksack and pulled out her sample kit. Carefully, she sliced several cuttings into vials and dropped them into the sack. Then she pulled out her camera. She started with several long shots and then moved closer, stepping carefully on the leaves and vines for a tight shot of the flower. Its petals were tightly folded with a waxy velvet sheen. They shimmered in the weak sunlight. Smelled like poppies.
She stepped closer. Stroked.
It was silky-soft.
As though reacting to her touch, the petals began to curl back, unfurl. Sage stared in fascination as the stamen was revealed, long and thick, bright yellow and heavy with pollen. A swollen pustule throbbed at its base. She leaned closer, pulling her camera up for another shot.
And the bud exploded.
In a great puff, it ejaculated a cloud of tiny seeds. A thick haze surrounded her. Seeds crawled up her nostrils and clung to her lips. Her hair was dusted with them.
“Shit,” she said under her breath as she backed away. Coughing and sputtering, she brushed the spores from her shoulders, her chest.
A strange flutter danced through her belly, followed by a wave of dizziness. Her vision blurred and weakness washed through her. Her thighs trembled and she stumbled, unable to negotiate her own feet. Fighting unconsciousness, she dropped to her knees.
And then she fell into the embrace of a soft bed of leaves.
She awoke to a dream. A misty, murmured haze.
Struggling to rouse herself out of the muddled cloud, she shook her head. The infinitesimal motion made her reel. She closed her eyes against the miasma, the exotic thrill skating through her. Her heart beat, distinct thuds pounding in her ears among a rushing tide.
Somewhere through the haze, she sensed movement. She wasn’t sure if she was moving or if the world moved around her. She felt as though she were floating, suspended, lighter than air.
A soft, questing tendril stroked her ankle. She tried to look at it but she couldn’t move. She couldn’t move at all.
The tendril tightened and another licked at her, on her other ankle.
A nip, gentle and oh so soft. Warmth blossomed at the spot, blossomed and rose within her until it flooded her being. A feeling of excitement—and impending doom—swamped her.
The tendrils at her ankles twined slowly, making their way up her calves. With each pass, they nipped again and the warmth expanded. A vague awareness of myriad movements captured her attention. Other tendrils twined slowly over her body, everywhere. They were on her face, her torso, her abdomen. They crawled and curled under her shirt, questing.
One of the tendrils found a nipple. As the soft, furred vine passed over the sensitive tip, it pebbled. The tendril froze. Returned. Made another pass.
Sage moaned and tightened her muscles, trying desperately to move away. But she was frozen, frozen in place, a statue.
A sacrifice. 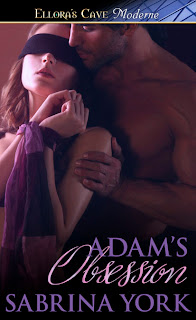 Sabrina York is an award winning author writing for Ellora’s Cave. She specializes in writing hot, funny romances with lots of steam, but has been known to wander down the dark path and flirt with alien sex and BDSM. Her debut novel, Adam’s Obsession, released to rave reviews followed quickly by the second book in this duet about a pair of tormented, sexy brothers, Tristan’s Temptation.
You can connect with Sabrina on Twitter at @sabrina_york or on Facebook. If you’re feeling brave, check out her naughty postings (definitely NSFW) on Pintrest. Of course, you can always check out coming books or read an excerpt at www.SabrinaYork.com. 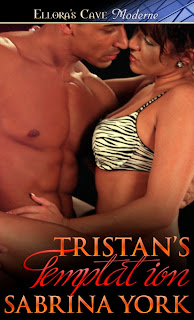 Contest: Sign up for Sabrina’s newsletter to enter her contest to win a sexy pair of rhinestone handcuffs at www.SabrinaYork.com. Drawing Date: September 1, 2012.
Thanks for reading!

Thanks for letting me rant!!!