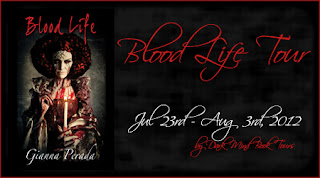 Hello and welcome to Dark Mind's tour of Blood Life by Gianna Perada.  Gianna wanted to give us her insight into vampires.  This is what she had to say:


There are many books and movies on vampires out there, both past and present. It’s truly a saturated market and tough for us authors to truly stand apart without a good fight. But, still, it’s all the rage. Vampires have been resurrected from Anne Rice’s romantic and sexy reign into a new, more carefully-crafted modern version consisting of glitter, current clothing trends, and youth. And people are eating it up. Can’t get enough! Which is great for the writer with new and exciting ideas to put out there. Stephenie Meyer, author of the Twilight saga, created a masterful series that ignited a craze and I applaud her, even though I’m not the sparkly type. And let’s not forget the wildly popular series’ Vampire Diaries or True Blood, both with their own takes on what a vampire should be. I remember when True Blood was getting ready to reveal itself. A vial of fake blood in a syringe made its way to my mailbox with absolutely no explanation and creeped me the eff out. O.o


MANY MANY versions of vampires these days… and they are all unique and fascinating in their own ways. Some are loved and some are not. But it makes me happy that they are still so adored, being that I’m working hard on my very own trilogy of these alluring, lovable, sexy immortal creatures.


These days in literature and in Hollywood, the vampire has been dissected every which way but loose. (Well, maybe a little loose if you consider Eddie Murphy or Leslie Neilson as the vampire!) Some wear sunglasses, foundation, and sunscreen to blend in (Lestat), others bathe in the blood of virgins to remain young (Countess Bathory), they impale guests at dinner, vaporize, and shape shift (Vlad the Impaler/Dracula). Still others walk around in Victorian lace, Levis, patent leather or latex, combat boots, and cloaks (many of the newer versions); some even resist the urge to feed—gasp!—with special serums (Blade), while others prey on the weak or ruined (et al). You name it, it’s out there; there’re never-ending possibilities. Vampires are fictional characters after all, are they not? But mine don’t sparkle or burst into flames when sunlight touches their skin. Nor are mine geared toward the young adult audience—I’m aiming at the 16+ crowd.


So who do you play for? Why? What do you like in your vamp or to get your vamp on? Humor me.

I would definitely agree that this book is not geared towards the younger audience!!  Lets take a peek at the book details: 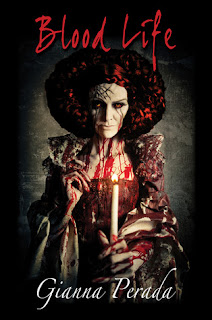 I like some romance in my vampire stories. However, I don't like it overdone. I don't like vampires that act like giddy schoolgirls. And, I don't like them play games or play hard to get for 75% of the book. If there's going to be romance, lead up to it, but do make it happen. If there's not going to be, then don't make us think there will be.

I'm not sure I answered your question too well, though.

I like my vamps strong tall dark and sexy with a bit of that dangerous edge that will only crumble for that one special person.

Danielle, I totally agree! I like my vampires scary. I also like to be seduced, but not ONLY seduced. I want a balance of the two. hehe

hmm alpha and scary - o/c if theyve lived that long the sex is fantabulous too :)

I like my vamps downright frightening and ruthless. I want a story that puts me on the edge of my seat; one that teeters between total engrossment of the book (not wanting to put it down) and one that scares the crap out of me!

I like a great combination with my vampires I love to have the good ones and the bad ones....I like to read the ones that embrace who and what they are as much as the ones who suffer with what they have become.

I like my vamp to be mysterious and dangerous..but loves eternally
darkworld_cutie at yahoo dot com

i like my vamp to be devoted and love only me ...

I am loving all the different responses! Definitely into the devoted bad boy vamps... and the tortured past.