Hello and Welcome to Lilou's kickoff with her book Dangerous Love.  Hello Lilou!  So glad I could share the start of the tour with you!!

Thank you, Nikki, for inviting me to be a guest blogger on CEWTNK! I am thrilled that CEWTNK is the first stop on my 3-week, 15-stop whirlwind tour. And thank you to the fab ladies at LitConnect for setting up everything. I will be giving away prizes at each blog stop.

Dangerous Love, my debut novel, launches on 8.6.12. It is available for pre-order on Amazon and All Romance.

The publisher is Crimson Romance, a division of F+W Media. Crimson releases titles in five popular subgenres: contemporary, historical, paranormal, suspense, and spicy. One of my Crimson sisters is Berinn Rae, also featured on CEWTNK. Way to go, Berinn! Whereas Berinn writes paranormal romance, I write in the spicy subgenre.
I live in Washington, DC. It was a Monday night in March. I was at the Verizon Center watching a Washington Wizards basketball game. As it was the first quarter and the Wizards had a losing record (11 wins, 37 losses), I was not fully engaged in the game.
I absently checked my iPhone. There was an email from the editor for Crimson Romance, where I had sent my manuscript the previous Friday. Apparently, Jennifer and her team had read it over the weekend. They wanted to publish my book!

Yippee! Even though the Wizards ended up losing (again) that night by a heartbreaking two points, I had clearly won.  What I really liked about Jennifer's email – besides learning that I was about to become a published author – was her definition of “spicy”:

“I’d love to have this for our 'spicy' line (what we’re calling our erotica that is super-sexy but emphasizes the romance).”

In Dangerous Love, the sex is romantic, metaphoric to the theme, and dangerous. I am not sure why! Up until reading Jennifer's email, I had no accurate label for what I as doing.
Set in contemporary Eastern Europe, my novel is about a Jewish American woman who falls in love with the son of a Nazi. In spite of her strong misgivings and guilt, she gets involved with him. The attraction between them is so powerful that she cannot resist.
Romantic? In Prague, he brings her to a secluded area beneath the Charles Bridge. They sat down a grassy patch. They watched the waves lap up to the pebbled shore and the city lights shimmer on the water's surface. When they both got tired, they lay down in each other's arms and stayed that way until the sun came up the following day.

Metaphoric to the theme? In an artist's loft, he ties her up with electrical cords. She was suspended. Laura reflected that in this flayed position, her body took on the shape of a swastika.
Dangerous? Here she was, locked behind bars for blowing her boyfriend...openly and in broad daylight.  As this is CEWTNK, I will mention that the night plays a role. After a shattering breakup, Laura stays up all night in Berlin. The city is percolating and helps to protect her emotionally.


Fast-forward to April. The Wizards win the last six games of the season, including two games against the eventual champions, the Miami Heat. And on May 1, I sign my author's agreement with Crimson.  Where were you when you received news that had the potential of putting your life on a new course? Comment below and enter to win a Dangerous Love eBook or $5 eGift Card. There will be one randomly drawn winner of each prize at this blog stop.

For more tour info, please go to http://www.liloudupont.com/p/events.html. Thank you! 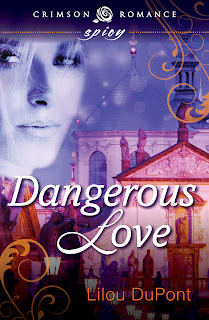 Book Blurb:
In Prague, Laura feels that she has met her soulmate. Yet how can her soul merge with the son of a Nazi?


"A real page turner! Take this book with you to your favorite café and drink some steamy latte. Who knows where it may take you!" - Rachel B.

"Enticing, exciting writing at its best! Dangerous Love is not to be missed!" - Tsaurah Litzky, author of The Motion of the Ocean 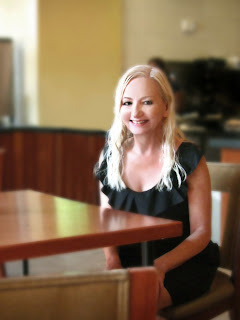 Sound like a good read?  Of course it does!!  Thanks for stopping by!!
a Rafflecopter giveaway

I like that the book is set in Europe, I am from Europe :)
The book is like Fifty shades of gray?! hmmm let's see.
Cheers!

I've always been interested in that period of history and the Nazi activities back then.

Thanks for hosting Lilou today, Nikki! :)

I absolutely love your blog! Thank you for hosting another awesome giveaway! :)

I´m from Europe so this book excites me a lot! :P

This books sounds fantastic. Thanks for the opportunity to win it. I need a great spicy read. :)
♥♥♥

Thank you, everyone, for dropping by! My book is definitely spicy (also somewhat literary) with imaginative sex scenes. I love visiting Europe. I hope you enjoy the book! <3

Sounds epic and I've been to Prague and walked across Charles Bridge so it really intrigues me.

Thanks Lilou for telling us about your book. It sounds like a really great read.

Wow! I love to read about anything that has to do with this subject, but I don't think I've ever read anything like this though :) It sounds really good, I'll have to add it to my TBR list!

Sounds like a great new book! Thanks for sharing.

This sounds pretty intense. They must have a lot to get through especially wit hone being the " son of a Nazi"......I am intrigued to read it and very curious.

This sounds like a great book! Thanks for sharing!

What a great blog and post!I'm so excited to be featured on this blog in September. Thanks for sharing, Lilou. I'm so proud to be at Crimson Romance with you. I loved you story about when you got the great news. When I recieved the contract offer for my trilogy, I was actually popping champagne for another contract with Beachwalk Press. No kidding. The champagne was chilling and we were just about to pop it when my phone whistled with an email. It was a grand morning indeed!

what a great story, I wanted to answer your question about life changing events, I was in my car picking up my kids from school when my husband called and told me he had accepted the job he was offered in Maryland (we lived in Utah) So moving across the country and leaving all of our family behind was pretty life changing, almost as life changing as getting used to the crazy drivers here LOL!
thanks, Carin
mawmom(at)gmail(dot)com

Thank you for sharing your success story, Jaye! Popping champagne! Looking forward to your guest blog in Sept. on CEWTNK.

Carin, As I live in DC (maybe not far from you in MD), I know what you are saying about the traffic! Thank you for sharing your story about a life changing event!

Lilou - I can't wait!!! And I know exactly what you mean about the "spicy" - I'm so glad Crimson emphasizes the romance and not just the sex!

LOL and TY, Irene! I do like that Crimson allows the sex to be imaginative. My scenes were not edited.

Congrats on your debut book! I keep hearing about Crimson and look forward to their future!

This looks really good, def going on my TBR shelf

Hello Ms.Lilou DuPont,Congrats on ur lovely bk. DANGEROUS LOVE..!! I wish U longevity ,happiness & all around best N ur endeavor!! I l@@k 4ward 2 ur BKS as well..:D
redz041@yahoo.com

I was wondering what was your writing process to you have something you do to help inspire you when you get ready to write?

Yay, love sexy love triangles. This books sounds like a must read. Thanks x

Hi rubyswan, Thank you for your sweetness! XOX

Hi Leigh! Thank you for your question! I will be blogging about this very topic on Friday, August 10 at
Ramblings from the Chick:
http://ramblingsfromthischick.blogspot.com/
I hope to see you there! I know in advance the emotional story that I would like to tell. I do not know the details until I put pen to paper. That is how I really find out what my story is about.

Hi Becky! Thank you for your comment! There are two threesomes in my book (FMM and FFM). Good luck in the drawing!

Hi Nurma!
I am glad you like the cover. My publisher, Crimson Romance, did an awesome job. I will be blogging about the cover on Wednesday, August 8 at Riverina Romantics: http://riverinaromantics.blogspot.com/
Hope to see you there, too!
Thank you for stopping by at CEWTNK!

Wow- I love all the complexities going on with the relationships in this book. I need to make an effort to pick it up! sdylion(at)gmail(dot)com

Thank you, SdyLion! Good luck with the giveaway!

Thanks for the giveaway sounds like good book. tree1313chevy@gmail.com

Thank you, Theresa! Good luck in the drawing! There are 15 chances to win a free eBook of Dangerous Love. I am giving away a free eBook (and $5 Gift Card) @ every stop! For links to all 15 stops, please go to:
http://www.liloudupont.com/p/events.html
Thank you for stopping by CEWTNK, an awesome site.!

There have been several moments in my life that I received such news. Getting married, getting divorced, starting a new job. I guess the ones that stand out most are when I was told I was pregnant. There's nothing more life changing than that.

And nothing like a mother's love, Dusty! Thank you for stopping by.

WOW! I have never seen a romance novel touch the very sensitive topic of Nazi Germany before! Very original and unique to me! Thanks for the chance to win!
Angie
14earth at gmail dot com

Thank you, Angie! Good luck with the drawing. By the way, there are 15 drawings! One book for every stop. Details @ http://www.liloudupont.com/p/events.html