Review: Grace Through Blood By: A. Jay Lee 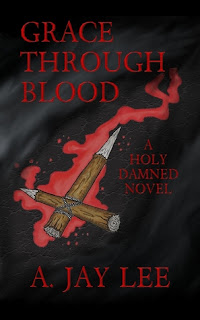 Welcome to the Nightlife of the Palmetto City

With an Arch-Demon masking itself as a serial killer, a NCSI agent hounding a Navy SEAL for crimes he didn’t commit, a clan of lycanthropes living secretly among the masses, and overseeing it all a congregation of pious vampires believing that they have ‘Divine Right’ over the city, the nights were wild enough. Add in one young woman with special abilities and in possession of a holy relic that threatens the existence of all vampires, and the stage is set for a dangerous mix of action and steamy sex over the course of hot, humid nights in this ‘Holy City’.

Jamie Grace wants nothing more than to lead a normal life, but her ability to see a person’s soul through an aura that radiates through every living person makes this wish impossible. Soon after arriving in her new home of Charleston, South Carolina, she encounters what appear to be humans that have no aura.

Jamie soon learns that the mysterious creatures are vicars of the Sanctum Damnatus and unfortunately they are as troubled about her existence as she is with theirs. Complications ensue when the vampire that has been sent to kill Jamie falls in love with her. With her would-be assassin turned protector, Jamie finds herself on the run from both the Damnatus and an Arch-Demon from Hell. Tangled with Christian dogma and biblical lore and set in this historic coastal Southern city, Jamie must find out whom she can trust and begin the journey of learning what she truly is in this first novel of the Holy Damned Saga.

Originality is something all readers want. We crave it.  We need something to spark our imagination and get us to thinking about...what if? Yes we love the romantic vampire, the one that has waited all his elongated, blood gorged life for his one true love to come back and show him that his life does not wallow in the darkness. But this isn't one of those books.  These vampires or Damned as they like to be referred to, have a purpose and are loyal to their cause.  But one woman upsets their way of live.  One seemingly normal human turns this order that has been around for decades right on it's head and she doesn't even realise why.

Jamie Grace is your normal starting over after her life has been shattered story.  She had always wanted to teach, it was her dream, but she ended up putting her life on the back-burner when her mom got sick.  It was very aggressive cancer and in a matter of months, her mother was gone.  Devastated, she packed up what was left of her belongings and just started driving.  She had no friends and very little money but she ended up in Charleston.  She had a few hurdles to overcome, but she settled into her new home rather nicely, and took a part time at a book store.  She set her life on a schedule and didn't often deviate.  She had only been serious with one other man and that had ended disastrously.  After she started teaching, she pushed men further to the side and when her mom became ill, out of her head altogether.  After settling in this sleepy little town, there was one man who had caught her fancy.  He came in one a week and she had subtly flirted with him, but he seemed unable to take a hint.  She really wanted to go out with him and found a way to trap him into a date...literally.  But Jamie had a secret.  She could see auras.  You wouldn't think that was such a big deal.  So she sees the color patterns to one's soul.  But what happens when you meet someone with no aura?

I could go on and on about this book.  It has an array of main characters, but the book is mostly focused on Jamie.  She is the key to the whole story.  I was truly blown away by the creativity in this author's fantastic invention.  The religious background and research that had to go into this book is staggering.  I was quite moved.  I thoroughly enjoyed the book although several questions remained unanswered, and leave me yearning to read the next part.  This truly was a fantastic read!!

Fabulous review! I actually won this book and have not had the chance to start it yet. With your review, I will be moving it up the list. I love books that are original. Thanks for sharing, Nikki. :)