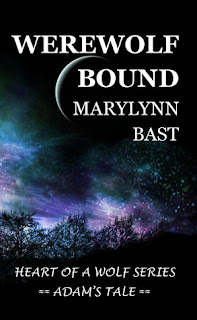 Adam Channing knows the rules…during the Full Moon Phase— DON’T GO IN THE WOODS.
Yet, he can’t ignore the call of a young female werewolf Patricia DuFur. He knows it’s against pack rules, but can’t resist the temptation and faces the consequences when her three brothers attack and leave him to die.

With Blake as a friend, he is well on his way to learning the ways of being a werewolf. Adams is constantly in a state of change when he receives the gift of “Seer”. His life takes on a whole new meaning out in the forest,

This was an excellent introduction into Bast's werewolf world.  It sets the standards and lays out the hierarchy, and gives you some insight on the background of the characters.  Adam started out as a pawn in Patricia's scheme to not mate with the wolf her father selected for her.  She wanted her brothers to change Adam so she could mate with him instead.  But her brothers had other ideas for the human which included leaving Adam to bleed to death in the middle of the woods.  Luckily for Adam, Blake happened along and changed him before his body gave out.  So Adam became part of his pack and really wanted nothing to do with Patricia, who had sat back and watched as her brothers tortured him.  Unbeknowenst to Adam, change was not quite done with him.  He is sent on a mission to help Blake track down Amber.  Throughout the story, Adam is learning, growing, and almost dies once again.  He receives guidance from an unknown source outside his body as Seriana heals his body.  You get a brief introduction to Seriana, but to me she is far the most fascinating creature.  This little short is extremely well written and chalked full of info.  It is well worth it to dip into this book before starting the series!!  Great Read!!!

I am lost, who is Amber? And what is Seriana? I am glad he didn't care for Patricia anymore. She sounds like scum!

I have to read this book.

Thanks for the review. I'm getting quite into short prequels and love shifter books <3

i want to read this series...

Well now I'm really curious. Thanks for the review.

I'm adding this book to my long wish list of books ;)