Giveaway, Review, and Sneak Peek inside Ghosts of Winter by Danielle D. Smith 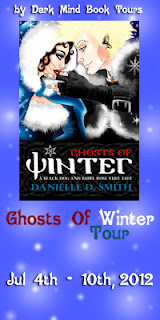 Happy Monday Everyone!!  Time to get back to the grind after such a long and lovely holiday, I know it sucks, but this should put a spring in your step!  Welcome to this stop on Danielle's tour of Ghosts of Winter.  This was a completely delightful and heart-wrenching short.  Let's take a look at the book details and peep inside: 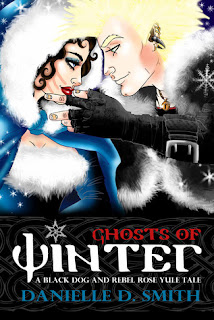 Half-demon supernatural hunter Skriker and his lover, the Nephil huntress Rose, are looking forward to nothing more than a little downtime for the holidays. But when an urgent call comes in from Skriker’s checkered past, hopes for a quiet Yuletide are quickly buried by a desperate request for help…and the hunt is on.

The notorious pair travels to Jokkmokk, Sweden to battle an ancient and angry force haunting the rural property of a retired hunter who once ran with Skriker in his youth. There they will discover that the ice holds many secrets…and sometimes those secrets can be deadly. 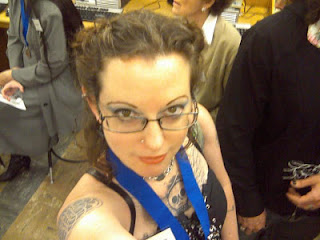 Danielle D. Smith is both a writer of gritty "outside the mainstream" paranormal tales, and an accomplished fine artist and illustrator whose visual work has appeared in various public, private, and gallery exhibitions and in national publications. In her career thus far she has studied everything from costuming to tattooing, and she is always on the hunt for the next great artistic adventure. Her books have been published under Solstice Publishing, Liquid Silver Books, and her own micro-press, Rebel Rose Publishing, and have hit the Amazon bestseller lists multiple times.
Dani lives in San Diego with a large number of books, indie flicks, and documentaries. Her stories appeal to dreamers, troublemakers, dark romantics, horndogs, and general escapists who are tired of the same old thing in the paranormal fiction world. She is the proud owner of a lovely little son named Ryker and several beautiful tattoos. Current projects include the graphic novel version of her wildly popular paranormal adventure tale, "Black Dog and Rebel Rose", and Book II in the Psyche's Gate Saga.

This was quite an interesting short!!  First you have Striker, who is a half demon/half human hunter.  He is foul-mouthed, over-confident, and sexy as hell.  Then you have Rose, his girlfriend, you is a Nephil..lol.  Now that is a unique and explosive pairing!!  Striker has answered the call for help from an old friend from his home town.  Dolph was a retired hunter himself with an amazingly sad story. Dolph had retired from hunting and planned to enjoy his retirement quietly, reading and spending peaceful nights alone at home.   But a presence has made itself known to Dolph and his surrounding neighbors.  Dolph is stumped and would very much like it to go away.  So he calls Striker in and together they puzzle out the entity and decide on the best plan of action.  I won't spoil the details of this adventure for you, just be warned its heart-wrenching.  I can totally understand Rose's hesitancy to start this hunt.  There are so many cruel things that were done in the past and to actually think this was a common practice breaks my heart.  I enjoyed this brief dip into this author's work and would love to read another piece.  It was very well written and extremely original!!

Danielle has kindly offered up 2 copies of this book along with a swag pack!!  Just fill out the rafflecopter and Good Luck!!
a Rafflecopter giveaway

I think recently, it would be Supernaturally Kissed by Stacey Kennedy.

The summoning series by Armstrong

I think my favorite book about a ghost would actually be a series of 4 books by Mickee Madden from the mid 1990's. Everlastin' and the 3 sequels were very touching and as you can see, quite memorable.

I really liked Destined for an Early Grave By Jeaniene Frost

A Ghost of a Chance by Minnette Meador is a great book! :)

The Best Book I Read With a Ghost Is Dark Needs At Nights Edge Is Defiantly A Great Book.

Immortals after dark series, & The Next thing I knew By John Corwin

Off the top of my head I am actually thinking about a series. Ghost Hunter Mystery series by Victoria Laurie. Book one is What's a Ghoul to Do?... A MUST read!

I really enjoyed Destined For an Early Grave by Jeaniene Frost and the rest of the books in the series that have different ghosts in them.

A story in Wattpad titled The Lost Boys.

The Morganville Vampires by Rachel Caine is the only book I've really read involving a ghost.

The one that stands out is Destined for an Early Grave By Jeaniene Frost.

A Christmas Carol by author Charles Dickens.
Thank you for the giveaway!
Artemis