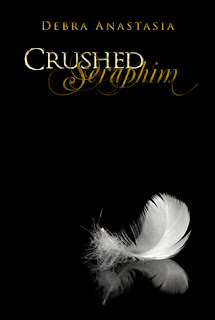 How does a foul-mouthed angel end up as the last hope for all of Heaven and Earth?

When Seraph Emma is maimed and tossed from Heaven by a rogue angel who's taken charge, she fears she'll never be allowed to return. Tasked with the impossible job of showing the self-loathing (and not even human!) Jason his worth, Emma is sure she's doomed to fail.

Meanwhile, having wormed his way into Heaven, the corrupt Everett has trapped God in Hell and has designs on unleashing evil everywhere. Fortunately, if there's one thing Emma can't do (in addition to minding her language), it's give up. Determined to save Jason and get back to Heaven-even if it means going to Hell-Emma's plan is simple yet impossible: trick the Devil to save God.

What she doesn't count on is the devotion and, well, humanity she finds in Jason; the spirit, hidden compassion, and raw sex appeal within the Devil; and the vulnerability of her own heart. With the help of two unlikely allies, she'll wage the battle for Heaven. But will Emma be sidetracked by a new sort of heaven along the way?

Falling from Heaven, or falling in love?

I have literally been blown away by the imaginative and unbelievably original story that this incredibly talented author has lain before me.  This book, not unlike the previous one I read of hers, is an all-encompassing ride for the senses.  You will laugh, you will cry, you become hot with desire, and you will experience every little nuance of emotion in between.  Debra has this unique way of writing a story that sucks your emotions out of you and throws them on this huge roller-coaster ride to the finish.  I literally wanted to throw my e-reader when I realized so much would be let unfinished and open.  Its actually hair-pulling to know I will be stuck in limbo, desperately waiting for book two.  Let me give you a taste of the ecstasy your senses will wither around in once you start reading this book.

Believe it or not, the book begins with hope, in Hell of all places.  One of the Devils best minions has fallen in love with a human and has come before Satan to ask for help on getting out.  Violent wants a chance at experiencing love on the mortal plane.  Satan hears her story and offers her a sword.  She may go free if she can make it out.  He fully expected her to fail and got back to his business at hand.  He was greeted some years later by the proof she actually made it.  One of her offspring was dying to work for him, literally.  Satan was delighted because it seems that Violent had created another race of beings, half-breeds that were later dubbed as vampires.  But this Satan ruling had a secret.  One that he has buried deep.

Emma was an angel, in the truest sense...well almost.  Even though her heart could crush you will its ability to love, she had a quirky sense of humor and an incredibly sassy mouth.  LOL.  She was an imperfect perfection.  I believe as you read through the story, you will begin to see her as I did, God's greatest creation.

Then we have Adam, who is a direct descendant of Violent.  He was the half-breed that Emma was sent to save.  She was his Christmas angel.  He was indeed lacking of faith because of his unusual existence.  He did not believe in himself.  Thank goodness someone above believed in him enough for everyone.

Add to this a plot to capture God in Hell, and one psycho angel named Everette wanting to take over Heaven, you have the makings for one of the greatest reads imaginable!  I truly have enjoyed both books I have read by this author but this one stands out.  I only wish I had a higher rating to bestow on this unique creation.  Unbelievably Excellent Read!!!