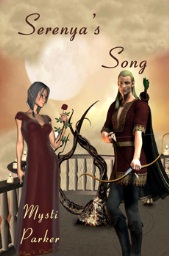 Welcome to this stop on Mysti's tour with her book Serenya's Song!!  She is here today to talk to us about what came first in her wondrous world.  Let's take a look at what she had to say:

Which Came First: The World or The Elves?


First of all, a huge thank you to Nikki here at Close Encounters with the Night Kind for hosting me on my Page Turners book tour. I heard tell that Nikki wanted to know a little bit about how I created the world of Tallenmere, where my fantasy romance series is playing out.


So, which came first: Tallenmere or its inhabitants? If you believe in Creationism, it makes sense that God might have had us in mind before time began.  But, even He had to give us somewhere to live before he actually created us.


Authors don’t have to adhere to such practicalities. Which means I first thought, and still think, my characters into existence before I build their world around them. With that in mind, let’s delve into the murky waters of my thought process concerning the creation of one of my main characters.


Caliphany, the beautiful, kick-ass wizard/ranger from A Ranger’s Tale was my first “child”, born out of many years playing MMORPGs and watching the amazing archery feats of Orlando Bloom as Legolas. I began writing roleplaying stories about her, deciding that the tall buxom blonde must be a high-elf, and would therefore come from a large elven city. I knew she would be magically inclined, but wanted instead to live the life of a ranger. That decision would have to be frowned upon by her family, since elves life the hoity-toity life apart from the rest of the world. But, more than that, she couldn’t come from just any old elven family. No, the conflict had to be greater, so I made her the niece of the king. I did consider princess briefly, but that idea’s grown a little cliché.


Now, our tall, pointy-eared lass needed a venue in which to break free from her gilded cage. She wouldn’t know about rangers and the world outside the city walls, I reasoned, unless she spent lots of time observing and speaking with travelers. So, I gave Leogard a bustling dock and had her sneaking there early one morning to watch the first ships of the day arrive and depart.


Tallenmere’s evolution started from those docks, where ranger and ship captain Galadin Trudeaux rescued Caliphany from near-kidnapping. She asked him to train her as a ranger and stowed away on his ship when her father attempted to force her into marriage. Talk about opportunity! Once you get your characters moving from one place to another, you’ve got the whole fantasy world at your hands, quite literally.


The rest of their adventure played out on the Southern Sea, where the Pillars of Yggrich, massive rocks jutting from the sea, provided both danger and a good hiding spot. Then, on to Faewood, home of the faeries. Caliphany had been so sheltered, I needed to give her some exotic locations to visit, after all.


I formed the Eastwood Mountains at the edge of Faewood, so she and Galadin would have the perfect location to hide from the king’s guards and continue with ranger training. A nice conflict was needed here too, so I took them to Bastivar, a crumbling temple infested with goblins. This gave Caliphany a chance to screw up enough to abandon her ranger skills momentarily in favor of her powerful fire magic, something she’d wanted to forget until that point.


From there, the story moved to Tilliya Island, then back to Leogard, where Caliphany’s first love Jayden Ravenwing came into the story….


Ok, ok, I won’t prattle on and on, or else I’ll be summarizing the whole book, but I think I’ve shown, hopefully to a fitting degree, that my world-building depends mostly on my characters, their motivations, and conflicts.


This is no less true for Serenya’s Song, which takes place in the small town of Summerwind. Jayden needed some place to escape after…I guess you’ll just have to read to find out. Ain’t I a stinker?

Tag line: In the fantasy world of Tallenmere, no one ever said love was easy...

Blurb: Serenya Crowe may be a half-elf commoner, but she's no ordinary woman. With the ability to interpret dreams, and a birth defect that forces her to wear gloves, she’s endured small-town gossip and the cruelty of her husband, Sebastian, The Earl of Summerwind. All she's ever wanted is to live a quiet life and raise a family. When she meets the new stranger in town, her world and her heart, are turned upside down.

Wood-elf Jayden Ravenwing is an ex-secret agent who wants nothing more than to forget matters of the heart. He left the bustle of Leogard and his failed marriage to make a fresh start in Summerwind. He never planned to fall in love again, especially with the enchanting Serenya Crowe.

When a strange portal opens on the Crowe property at the edge of town, Jayden is thrown into an investigation, knowing that if he fails, Serenya and everyone in Summerwind may die.

Together, he and Serenya must overcome an ancient evil, and their own inner demons, to save Summerwind and find the love they've always dreamed of.

Author Bio: Mysti Parker (pseudonym) is a full time wife, mother of three, and a writer. Her first novel, A Ranger's Tale was published in January, 2011 by Melange Books, and the second in the fantasy romance series, Serenya's Song, was published in April 2012. She reviews speculative fiction for SQ Magazine and is the proud writer of Unwritten, a blog recently voted #3 for eCollegeFinder's Top Writing Blogs award. She resides in Buckner, KY with her husband and three children.

You can find Mysti at the following places:


Mysti has generously offered up 10 copies of her book!!  Just comment to win and make sure you leave your email address!!  Don't forget to check out these other giveaways as well:
Page Turner Book Tours are hosting an exclusive competition where you can win one of two stunning handmade bracelets that have been created with aspects of Serenya's Song in mind. To find out more about the competition and to enter please click HERE

I also wanted to tell you how much I liked the names of the characters in your novel. Kinda unique and musical, to me.

Very interesting post! Loved to hear how you built your world around the characters! Didn't know half of that stuff. And aren't MMORPGs awesome? O:)

So glad you stopped by, VJ and Stef. I actually have about 19 ratings now on goodreads. :) And they're all good so far!

Really interesting post! I love learning about new to me authors. Thanks for the introduction. I'm a character driven reader, so I really like the idea that the characters come first.

This is such a great post. I can't wait to read this book. It sounds amazing!
Booksniffersanonymous AT gmail DOT com
Book Sniffers Anonymous

Sounds like a great book. I'm always on the look out for Fantasy Romance & Mysti is a new author to me. Heading to check out her books now! I love your pseudonym; Mysti is such a nice name for a fantasy romance writer.

Hey Sandy! I totally agree! It's the characters I have to fall in live with when i'm reading a book. Good luck!

Hey Kristin! I hope you enjoy SS as much as I enjoyed writing it. I'd love to hear what you think when you get a chance to read it!

Would love a chance to read this. Thank you for the giveaway! Bboo04@hotmail.com

Hi Kara!! If you get a copy, I'd love to hear what you think! Have a great weekend :)

Thanks Linda! Glad you like my pen name. It's actually just a variation of my real name. :)

Emily, Bboo, and Holly-- thanks so much for entering!! Have a great weekend!!

How freakin awesome does this book sound. Love the supe choices in particular. A definite on my tbr list.
Thank you.
bexnbooks @ yahoo.com

Thanks do much for commenting, Bex and when you get a chance to read them, I'd love to know what you think. Have a great weekend!

Wow this looks like a great read. Thanks Nicki for another introduction. I'm looking forward to this one.

Hi Mysti,
thank you so much for the chance at such a great giveaway. i love the cover, it's gorgeous and the book sounds wonderful. definitely going on the top of my TBR/TBBN list even if i don't win. :D

Did you design the cover?/have a lot of say it how it turned out?

i know some authors get little to no say in how their book cover will look.

thx u for the giveaway...
i love story about elf...
and the man model on the cover looks like my idol, legolas :)

Yes, it's international too since ebooks can travel anywhere :) And Nurma, Legolas was a HUGE inspiration for me to start this series! Thanks for commenting!

Hi Tammy! No, I didn't design the cover, but collaborated via email with the cover artist, Mae Powers, who was great at listening to my ideas until she found just the right thing. She even made Jayden's ears pointy :) Thanks so much for commenting!! I'd love to hear from you via email, Goodreads, or Amazon ratings when you get a chance to read it!

Hiya Dusty! Thanks for stopping in! Today's my birthday, so it's great to see more people interested!

I want to read this book! I love the name and it just sounds so intriguing and exciting.
Wish me luck!

This book sounds interesting. I'd love to get to read it. Also, Mysti, way to go my fellow KY girl! I love it when an author puts that their from KY in their bio, especially a small town. I feel a connection. I've gotten books based on that alone in the past. But truly I love fantasy.

I would love to read this fantasy book since I love reading about elves and different realms almost as much as vampires. Kudos to you Mysti, fellow KY girl, for your accomplishments! Also I love it when an author puts in their bio they are from KY, especially a small town. I feel a connection.

Hey, Antoinetta! As I say on my bookmarks, betcha can't read just one :) Thanks for commenting!

Hiya Stephanie! Woot for KY girls! Thanks so much for stopping by. Feel free to drop me a line. I love to connect with my fellow Kentuckians.

Serenya's Song sounds like quite a ride. I love new and different worlds and am really looking forward to this one. Thank you for taking the time to share with us today :)
dz59001[at]gmail[dot]com

Hey Denise! Thanks for stopping in and I hope you'll let me know what you think when you get a chance to read it!

Looks like a really interesting read, and the cover is gorgeous!

Thanks, Ashley! Best of luck, and do let me know what you think if you get a chance to read it! Stay cool.