Review: The Catalyst By: Zoe Winters 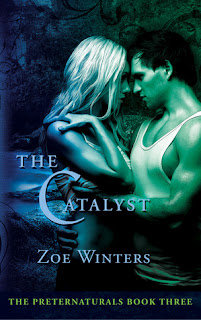 It started with one lost, shivering pup; it may end in a war...


Panthers don’t do responsibility. They don’t do long-term relationships. They definitely don’t raise kids. But when Z discovers a young wolf in the forest, he takes him in, unaware of the powerful beings hunting the pup.

Fiona is a witch who can’t leave her house; the birds have told her something bad will happen. The mailbox is as far as she’ll go, but even that may provide more danger than she’s bargained for. When a wolf pup stumbles into her garden, her safe, wrapped-up world heads for a free fall.

But along with danger, the pup brings a chance at love—a chance an agoraphobic witch and a bachelor panther shifter aren’t likely to find on their own.

First, before I start with the character analysis, this was an incredibly creative story. I was really impressed with the creation myths centered around each species. They were very unique and I LOVE unique. This book had a little bit of everything, including a very entertaining and funny witch!

Fiona has a fear of the outside and it goes deeper than the birds telling her something bad is going to happen if she goes outside. On her routinely stressful everyday trip to the mailbox, Fiona hears a cry. Having the gift that allows her to communicate with animals, she is at first confused when she can't get a read on it. Then she realizes its young and doesn't have a good enough grasp on the language to tell Fiona whats going on. No sooner does she take it in the house than she is attacked bu....a panther? No! Its a shifter. Fiona acts fast to try and communicate with him. But when Z reveals his human form to her, nothing can keep her eyes from devouring the splendid display of flesh!!

Z is a bachelor and he wants to keep it that way. Every since he stumbled on the pup his life has been in an uproar. He just wants things to go back to normal, and this witch may be the ticket he is looking for! And the pup likes her! But its more than her smell that attracts Z. But his life was going to go back to normal one way or another!

So we have a witch, a moody bacheloresk shifter, and a puppy. And this is only the beginning. There are several stories going on simultaneously and the plot ever thickens. My favorite character is Cain, and just wait until you find out who he is!! This is the third book in the series but I had no problem following it. I thought this book was delightful and can't wait to sample another taste of this series! Excellent read!!

thank you for the great post/review. i love the cover, it's gorgeous and the book sounds wonderful. i can't wait to see what happens next.

Thanks for the review. Book sounds like a great read to me!

Love the review and this is def. going up on my TBR list =)

Sounds steamy! Thanks for the review. :)

Sounds like one excellent read to me. I want to get my hands on this one. sdylion(at)gmail(dot)com

I'm looking forward to reading this series. Thanks for the review.

This sounds like an interesting book and series and I can't wait to read it.