Review: Men of the Cave By: Marisette Burgess 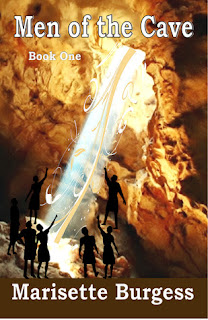 Raised by unorthodox parents, Kasey Reese has always struggled to be invisible, to not be noticed, to avoid conflict. Running from a broken relationship, Kasey flees to Spain on a scholarship, to restore the comfort she finds in anonymity. Destiny, however, has other plans for her - a life threatening, life-altering journey into the supernatural when she meets the men of the cave.

I wasn't sure what to expect with this book, but I was intrigued by the cover.  Then I opened up and read the word Pandora and I knew it was going to be good.  Everyone knows my love of Greek Mythology, so this book was right at home in my library!  And what a fantastic read it turned out to be!!

Kasey was a lovable and mature teenager, excited about the concept of being able to study in a new country.  She was leaving behind a really bad break up, an eccentric pair of soon-to-be nudist parents, and one lonely little brother.  She was taken away by the beauty of the country and couldn't wait for a chance to explore her temporary home.  As she was being introduced to the locals who inhabited the restaurant, her eyes were drawn to a table filled with five brothers.  They were all exceptionally good looking, but one in particular stole her breath.  It was at that precise moment, she knew her life was about to change.  She just dint realize the scope of the word change.

Dion knew she was coming and knew she was going to be important to his future.  But knowing and seeing are two completely different things.  He had never been involved with one other human, and that was a few hundred years ago.  Would Kasey be able to accept him for what he was, or would she turn away in fear and disgust?  One thing was certain, he would take it as far as she would let him.

This story takes Greek and Christian religions and mixes them together brilliantly.  The concept behind the immortals, the creation of the Greek pantheon, and God's army of angels was truly unique and refreshing.  This was a delightful glimpse at this authors talent and I must say, I am looking forward to book 2!!  Excellent read!!!

OH you said Greek Mythology and I am so there, didn't have to read much more LOL. But seriously great review I will be adding this to my list, at the top maybe :)

Interesting... I will have to add this to my list.

This sounds really interesting. Thank you for the review.

good review of the book, I must not put it on my TBR list! I too have a fondess for Greek Mythology.

Thanks for the great review Nikki.
It's always refreshing to hear that people out there enjoy the Greeks as much as I do.
If you want a taste of the second book Jar of Pandora check out my site : marisetteburgess.com

Thank you for the invite. If you hadn't invited me I would have missed out on learning about a great book. It's going to go on my TBR and wish list.

Greek Mythology does fascinate. I'm glad you enjoyed MEN OF THE CAVE. I will check it out.

Great review. I could tell you really liked the book. I'm sure I would too.

Great review. I'll have to add this book to my TBR list.

Very nice review. One for the TBR list for sure.